Copyrights: ©2021 Watanabe S, Hayashi S, Abe N, Kira S, Fujimoto S, et al. This is an open-access article distributed under the terms of the Creative Commons Attribution License, which permits unrestricted use, distribution, and reproduction in any medium, provided the original author and source are credited.

Background: Patients with malignant tumors experience numerous neurological complications. Paraneoplastic syndrome might be caused by autoimmune mechanisms that develop before a tumor is discovered.

Case: A 72-year-old woman with a history of falling for >8 months and dysarthria had symptoms of cerebellar degeneration and was diagnosed with anti-Yo antibody-positive fallopian tube cancer. Examination revealed CA125 elevation, positivity for anti-Yo antibodies, and left fallopian tube cancer. She received paclitaxel/carboplatin therapy after laparoscopic bilateral adnexectomy. Subsequently, her cancer and paraneoplastic syndrome (ataxia) did not worsen.

Conclusion: The absence of peritoneal dissemination despite stage IV fallopian tube cancer is extremely rare and may be related to anti-Yo-antibodies. Patients with unexplained cerebellar ataxia should undergo thorough early examination for malignant tumors.

Here, we report a case of primary fallopian tube cancer with anti-Yo antibody-positive cerebellar degeneration. The patient had cerebellar ataxia symptoms for at least 5 years, and there was almost no peritoneal dissemination, even though the patient already had stage 4 fallopian tube cancer at the time of diagnosis. This is a very rare condition, and it is thought that the anti-tumor Yo antibody may have slowed down the progression of the cancer and limited peritoneal dissemination.

The patient was a 72-year-old woman, gravida 5, para 3. Following an episode of stomach cancer at the age of 60 years, she underwent distal gastrectomy. No family history was observed. She had no genetic disease. She began to feel unstable walking 5 years ago, but this did not interfere with her daily life. She had started to fall more often 8 months previously, and 6 months later, a friend noticed that she had dysarthria and scanning speech. These symptoms gradually worsened, and dysmetria appeared, and falling often occurred in daily life. One month later, she was referred to our hospital and was examined for the first time. Neurological examination indicated scanning speech and cerebellar ataxia that were clearly right-dominant and lower limb-dominant. The patient was admitted to the hospital for further examination. Based on the patient's history, we considered corticocerebellar degeneration, such as multiple system atrophy and spinocerebellar degeneration, as well as paraneoplastic neurological syndrome due to a history of gastric cancer. Various tumor markers (CEA, CA19-9, CA125, CA15-3, IL-2R, NSE, and proGRP) were also measured; high levels of CA125 (1,892 U/mL) were observed, suggesting the presence of a tumor. She was positive for anti-Yo antibodies. These symptoms and results meet the diagnostic criteria based on the guidelines set forth by an international panel supported by the Paraneoplastic Neurological Syndrome Euronetwork in 2004 [8-10]. We strongly suspected paraneoplastic syndrome due to gynecologic cancer. 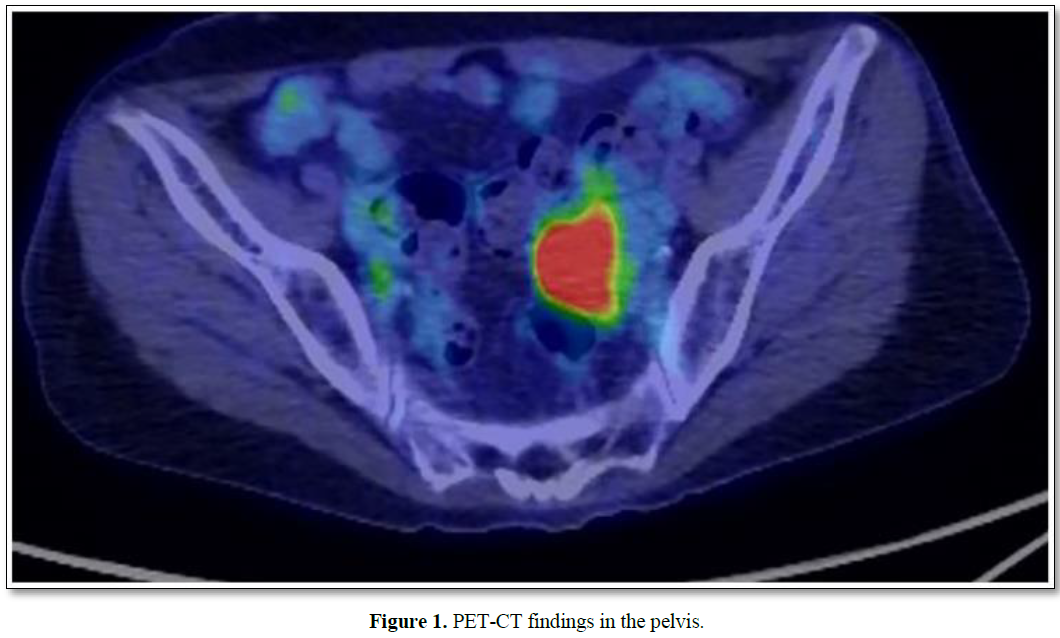 To determine if the tumor was metastatic (previous gastric cancer) or primary adnexal tumor, exploratory laparoscopy and bilateral salpingo-oophorectomy were performed (Figure 2). No peritoneal dissemination was observed. However, there was direct retroperitoneal invasion of the left fallopian tube cancer. Pathological examination revealed a high-grade serous carcinoma (Figure 3). The fallopian tube cancer metastasis was diagnosed from a mediastinal lymph node biopsy by bronchoscopy following surgery. The diagnosis was FIGO IVB (pT2bNxM1). BRCA gene test was negative. Post-surgery, nine courses of paclitaxel and carboplatin plus bevacizumab were administered, and partial remission was achieved; the tumor markers remained negative. However, her dysarthria improved only slightly, and her cerebellar ataxia did not improve. Furthermore, as a side effect of chemotherapy, nausea and vomiting and grade 4 myelosuppression were observed, which improved with the use of antiemetic drugs and Granulocyte Colony Stimulating Factor administration. Chemotherapy was suspended due to the continued postponement of the chemotherapy schedule due to myelosuppression and because tumor progression was inhibited based on imaging findings and tumor marker trends. Currently, her chemotherapy has been suspended at the request of the patient and family, and no recurrence has been observed. Consent was obtained from the patient for publication of this case report, and this study complies with the provisions of the Declaration of Helsinki. PET-CT shows abnormal accumulation (SUVmax = 17.24) in the left ovarian region. 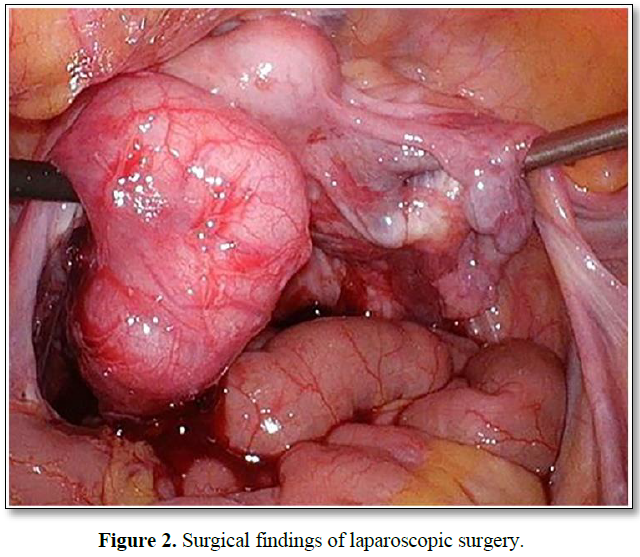 A 4×2 cm swelling of the left fallopian tube with bloody ascites and direct invasion into the Douglas pouch. However, peritoneal dissemination was not observed.

Paraneoplastic neurological syndromes, including cerebellar degeneration, are rare disorders associated with cancer [11]. They can affect any part of the nervous system, including the central, peripheral, and autonomic nervous systems. In general, neurological symptoms tend to progress sub acutely, and severe somatoform disorders can occur. In approximately 80% of cases, neurological symptoms appear and antibodies are detected before the tumor is discovered [4]. Non-gynecological tumors are often small-cell lung cancers positive for anti-Hu antibodies [12,13], although most cases that are positive for anti-Yo antibodies are breast cancer or gynecological cancer [3].

Anti-Yo antibodies were first reported by Greenlee and Brashear in 1983 in the cytoplasm of cerebellar Purkinje cells and serum of patients with cerebellar ataxia accompanied by ovarian tumors [14]. According to Peterson [2], 44 of 55 patients with paraneoplastic neurological syndrome who were anti-Yo antibody-positive had gynecologic cancers (26 with uterine cancer, 14 with ovarian cancer, and 4 with fallopian tube cancer) [2].

Cerebellar symptoms progress sub acutely in anti-Yo antibody-positive patients before stabilization, but the type of cancer determines the prognosis. The mean survival period was 100 months for breast cancer and 22 months for gynecological cancer [3]. In the present case, the cancer was already stage IVB and had metastasized to the mediastinum and spleen when it was diagnosed. The 5-year survival rate for stage IV fallopian tube cancer is 12%, regardless of the presence or absence of paraneoplastic syndrome [15].

Eighteen months after her surgery, tumor regression was maintained, and her clinical course was good with no exacerbation. Malignant tumor progression in patients with cerebellar degeneration and autoantibodies is often slow. Autoantibodies are thought to suppress tumor growth through an autoimmune mechanism [16]. In the present case, cerebellar ataxia may have appeared 5 years ago, and fallopian tube cancer might have developed even before that. It is unusual that no peritoneal dissemination was found despite the advanced state, perhaps indicating that the antibodies had an inhibitory effect on tumor progression, as previously suggested [3,16,17]. However, it will be necessary for future studies to investigate advanced cases of paraneoplastic syndrome to confirm our hypothesis. Furthermore, caution should be exercised when considering these findings because of the limitations inherent in drawing conclusions from a single case.

The mechanism by which anti-Yo antibodies damage Purkinje cells in the cerebellum is still not understood. However, once cerebellar degeneration has progressed, resection of the primary lesion, chemotherapy, and immunotherapy have no beneficial effects [3]. The present case also exhibited no improvement after treatment, except for a slight improvement in dysarthria.