Copyrights: ©2021 Kulkarni A & Pathak S. This is an open-access article distributed under the terms of the Creative Commons Attribution License, which permits unrestricted use, distribution, and reproduction in any medium, provided the original author and source are credited.

Pacemakers, implanted cardiac defibrillators and ventricular assisted devices are frequently used for managing heart failures and patients with rhythm disorder. While managing such patients coming for oncosurgeries and cancer treatment, there are several issues related to equipment characteristic whose understanding is a must for the anesthesiologist. There is a possibility of malfunctioning of these devices, however timely intervention can prevent catastrophic outcomes.

The number of patients with cardiac implantable electronic devices (CIEDs) continues to grow at an astonishing rate worldwide. The task force Practice Advisory in conjunction with the Heart Rhythm Society (HRS) now the emphasize on an individualized approach to patient management. In this article problems and the management of three patients with pacemaker for modified radical mastectomy for carcinoma breast has been highlighted. The fact that the pacemakers in these patients were present on the same side as the malignancy made the management of these patients very challenging. Both during the diagnostic interventions as well as the treatment, precautions have to be taken so that the functioning and the anatomic integrity of the pacemaker is not hampered.

A 72years female had presented with a lump in the upper outer quadrant of the right breast for 4 months duration. Core biopsy confirmed the diagnosis of invasive ductal carcinoma. She was planned for wide local excision with sentinel lymph node excision.

She had a history symptomatic bradycardia for which pace maker was inserted in 2003. Anatomically, the pacemaker was located in a subcutaneous tissue pocket in the upper pole of the right breast 5-6 cm away from the primary tumor. No information was available regarding the type and the manufacture of the device, so reprograming of the device was not possible. Chest x-ray showed a dual chamber device. Her transthoracic echocardiogram showed a normal ejection fraction and left ventricular size. All her laboratory investigations were normal. In the operation theatre other than the standard monitoring, left radial artery cannulation was done for invasive monitoring and a 5-f sheath was inserted in the internal jugular vein under ultrasound guidance for emergency temporary pacing. Emergency cart and the defibrillator was made available in the operation theatre. A magnet was placed over the pacemaker to produce an asynchronous mode (Figure 1). She was induced with standard general anesthesia. Oxygen, air and sevoflurane was used for maintenance. During the surgery surgical scalpel and bipolar cautery was used. The cautery dispersal plate was placed on the leg. During the raising of the upper flap, the magnet got displaced resulting in bradycardia. However, by the immediate repositioning of the magnet the rhythm was restored. After the surgery she was shifted to the ICU after removing the magnet. After surgery she underwent partial breast irradiation with the lumpectomy cavity in the center. Care was also taken to keep the leads and the wires were kept out of the radiotherapy portal. A dosimeter was used to calculate the total exposed dosage of the radiation. No event of bradycardia/tachycardia/ arrhythmia was recorded. The pacemaker engineer evaluated the pacemaker parameters every week. ECG was done before, during and after completion of course of radiotherapy.

Case 2 A 53 years female had presented with a lump in the right breast and she was planned for breast conserving surgery with oncoplasty. Patient was a known case of sick sinus syndrome and had Pacemaker placed 14 years ago, she required replacement of pacemaker after 5 years due to malfunction, the present pacemaker Model no SENSIA SE3SOI-VVI –Medtronic has been functional for 9 years. She was asymptomatic and her Echocardiography revealed LVEF 58% with no regional wall abnormality. Chest x-ray showed Pacemaker and its lead seen placed in right ventricle. Pacemaker functioning assessed by Medtronic technician revealed 90 % patients own rhythm and 10% dependent on pulse generator. The pacemaker was reprogrammed to VOO mode before surgery. The patient’s heart rate increased to 108/min from pre-program rate of 68/min. Arrhythmias were encountered during the use of cautery due to the close proximity to the pacemaker. However, the patient remained hemodynamically stable throughout the surgery. In the postoperative ward the pacemaker was reprogramed to VVI mode. After the surgery she was planned for radiotherapy but due to the close proximity of the pacemaker, there was a probability of pacemaker dysfunction. Thus, the cardiologist repositioned the pacemaker to the opposite of the chest through a subcutaneous tunnel. She tolerated the procedure well and comes for regular follow up. 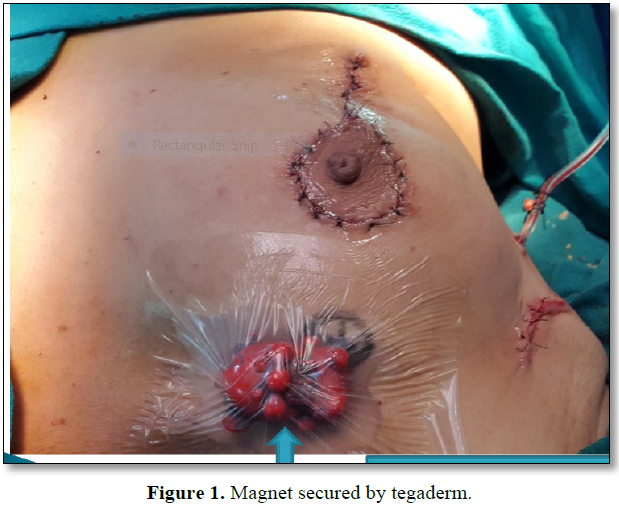 A 75 years female with a breast lump lower quadrant had come to the surgical OPD for further treatment. For diagnosis she was planned for mammogram. In the past she gives a history of AV nodal ablation with permanent pacemaker placement. Figure 2 During the mammogram she suddenly collapsed. She was immediately shifted to the emergency ward. ECG showed severe bradycardia and hemodynamic instability. She was started on inotrope and temporary pacing had to be done. The pacemaker was evaluated for functional and anatomical integrity. The pacemaker was intact without any lead breakage or dislodgment and was reprogrammed to DDD mode. Later she underwent BCS with oncoplasty. The pacemaker was programmed to DOO mode during the surgery and DDD after surgery. She tolerated the procedure well. The pacemaker was shielded with a block during her radiotherapy and was interrogated after regular interval and dosimetry was performed whenever possible to assess the actual dose being received by the pacemaker so that timely adjustments in total dose and treatment techniques can be made. 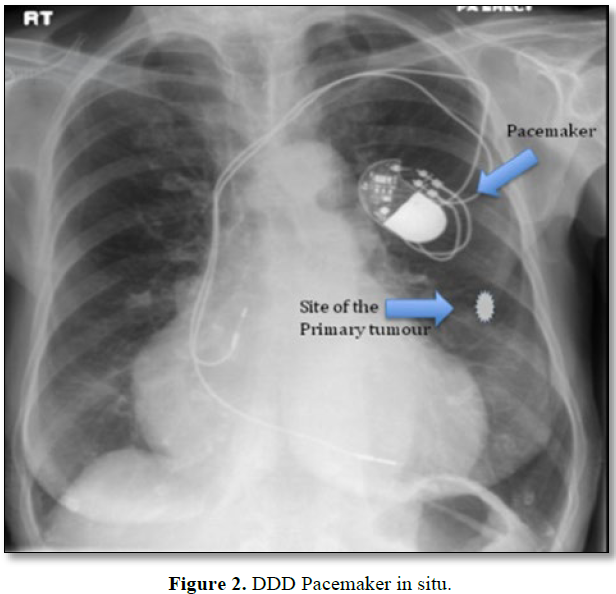 The coincidence of two diseases, breast cancer and conditions requiring implantation of a rhythm control device is an infrequent event. Preoperative assessment should include a focused interview regarding the CIED and ECGs, and chest X-rays. Detailed information regarding the type of device, the indication for its implantation, and current settings must be recorded. In the absence of previous pacemaker records, CXR can provide information about lead configuration, and whether the device is a single- or dual-chamber pacemaker, a biventricular device, or an ICD. It is also important to know if the patient is pace maker dependent. History of symptomatic bradyarrhythmia or syncope suggests pacemaker dependence, as does a history of nodal ablation. If every P-wave and/or QRS complex on the ECG is preceded by a pacemaker spike, the likelihood is high that the patient is pacemaker-dependent.

In all three of our patient different challenges associated with pacemaker has been encountered. In the first case the pacemaker could not be programmed due to the unavailability of information regarding the pacemaker. We had placed magnet over the pacemaker to convert it to asynchronous mode. While magnet application to control CIED function is appropriate in some cases, in others, ‘blind’ magnet application alone as a management strategy might provide nothing more than a false sense of security because it might fail to address all necessary perioperative issues and accomplish the intended goals [1]. Unipolar cautery should not be used in these patients as EMI can cause a pacemaker to initiate a noise reversion mode or noise suppression protocol which triggers asynchronous pacing until the noise stops [1]. Bipolar cautery and Liga sure are preferred and short, irregular bursts with more ‘cutting’ than ‘coagulating’ current should be used.

The likelihood of adverse EMI-CIED interactions decreases with the distance from the EMI source to the pulse generator (a critical distance of 6 in. is mentioned). With modern sub pectoral devices and electrosurgical cautery units, it is currently believed that the potential for interactions is markedly reduced when the surgery is below the umbilicus and the cautery dispersal pad is placed so as to direct the current away from the pulse generator. Aside from the potential effects of EMI, one should also take care to avoid dislodging recently implanted leads (<6 weeks old; e.g., by placement of a pulmonary artery catheter) It is desirable in general that a pacemaker has been checked within the last 12 months and an ICD within the last 6 months [1].

Higher frequency waves (e.g., X-rays, γ-rays, infrared, and ultraviolet light) are unlikely to cause interference with CIED function, though repeated and/or prolonged exposure to certain types of radiation can cause deterioration of insulation within the device with resultant short-circuiting or other electrical problems. The impact of ionizing radiation varied significantly between implanted devices and ranged from no functional changes to complete loss of function. Important device dysfunctions included changes in sensing capability, altered pacing pulses or rate, changed or disabled tachyarrhythmia ICD therapies, early battery depletion and loss of telemetry. Modern pacemakers and ICDs are more sensitive to radiation than older models. Potentially life-threatening complications were observed after exposure of the pulse generator to comparatively low radiation doses (0.11 Gy) [2]. Last [3] and Wilm [4] recommended to keep the cumulative exposure dose on heart pacemaker if possible <2Gy and by all means <10Gy, with the lowest possible dose rate. The recommended dose limit for ICDs produced from Medtronic is variable from 1Gy to 5Gy depending on the model. The second patient had to undergo repositioning of the pacemaker to the contralateral side before the radiotherapy to prevent pacemaker malfunctioning.

Patients with history of radiofrequency ablation with pacemaker placement are a very high-risk group and the annual rate of sudden death in these patients has been estimated to range from 1.9% to 3.7% [5,6]. The Potential mechanisms include pacemaker failure in the absence of an escape rhythm, ventricular arrhythmias associated with coexisting heart disease [6,7] or exacerbated repolarization abnormalities secondary to an abrupt change in heart rate [7,8].

In mammography Compression of the breast is essential for reducing the radiation dose, preventing motion artefacts, obtaining flattened breast tissue with a homogeneous tissue thickness to improve the dynamic range of luminance and for improving visibility by spreading structures in the breast [9]. Increased compression force is associated with pain, discomfort and rarely lead fracture in these patients. Although the pacemaker was intact, the pain due to the compression force probably had resulted in arrhythmias resulting in the hemodynamic instability and collapse of the patient. The presence of an IMD may lead to lower image quality of the mammogram. Assessment of the mammogram is more difficult when the device is located in the middle of the breast because of interference between the device and image acquisition. Thus, mammography must be done in the presence of an anesthetist, by experienced technician to prevent complications.

Management of pacemaker patients with breast carcinoma involves many challenges. Risk of pacemaker malfunction and cardiovascular collapse exists during the screening, surgery and after surgery during radiotherapy. Therefore, cardiac evaluation, presence of experienced intensivist and the comprehensive knowledge of pacemaker functions and malfunction is a must for management of these patients. Radiation oncologist must be aware of the limitations in radiotherapy planning with a pacemaker in situ and thus alternative treatment options or radiotherapy technique involving different beam angles including non-co planer beam arrangement, and accessories for beam shaping like multi leaf collimators, wedges and metal alloy shielding can be considered.