Copyrights: ©2021 Sidoun MA, Albolatti KA, Elfageih MA, Elturki AA, Elrgaig MA et al. This is an open-access article distributed under the terms of the Creative Commons Attribution License, which permits unrestricted use, distribution, and reproduction in any medium, provided the original author and source are credited.

Objective: The aim of the study is to analyze the epidemiological and clinicopathological features of malignant renal tumors in the midland region of Libya.

Methods: From January 2014 to December 2019, 57 patients at National Cancer Institute of Misurata proved histopathologically with renal malignancy are included in this study. Related variables such as patients’ demographic features, clinical presentation, size of tumor and laterality, type of surgery, type of chemotherapies and metastatic status were collected from the medical records and pathology reports. All variables were analyzed using the software of “Statistical Package for the Social Sciences” (SPSS), version 20.

Conclusion: The incidence of renal tumors in Libya has increased in 2017 & 2018. Hence further cohort studies on risk factors, pathogenesis, and efficacy of minimally invasive surgery (Robotic & Laparoscopic surgery) vs open surgery are required. Implications of immunohistochemical stains are critically useful for suspicion of new metachronous tumors affected by the same hormonal receptors. Establishing or introducing a screening service in Libya will be of help in early-stage detection of cancer. Importance of target therapy as part of neoadjuvant therapy to prove resection with adequate free margin and metastasis cure, more of disease-free survival.

The highest incidence of KC is for North America, Australia, New Zealand and East Europe countries. The lowest incidence rate is for South Africa, desert countries, the Pacific Island and India, its incidence rate in Africa is less than 1.5 per one hundred thousand population [3].

Survival rate of Patients with advanced or metastatic disease are poor. Approximately 20-30% of men and women with RCC present with metastatic disease, while 20-40% of those who undergo surgical resection for localized RCC will develop metastases later, making this disease state a considerable challenge [5,6].

Most RCC cases are highly suspected by imaging. Diagnosis is generally practiced by contrast enhanced abdominal CT scan, which enables local invasiveness, suspected involvement of the lymph node, distant metastases and venous involvement by tumor thrombus, magnetic resonance imaging (MRI) may provide additional details, definitive pathological diagnosis, tumor staging and evaluation of lymphovascular status are based on the nephrectomy specimen when available [7]. The study found that percutaneous renal tumor biopsy has good accuracy in the diagnosis of renal cancer and its subtypes and appears to be safe [8].

Cytoreductive nephrectomy (CN) is defined as the surgical removal of the primary renal tumor in the setting of metastatic renal cell carcinoma (mRCC) in contrast to Radical nephrectomy (RN) which is surgical removal of the primary tumor along with entire kidney, Adrenal gland, lymph nodes and surrounding tissue with a curative intention for localized renal malignancy with no distant metastasis [9, 10]. This type of surgical resection can be a challenging operation with significant potential morbidity, especially in older patients, and has been associated with increased complication and perioperative mortality rates [11].

Partial nephrectomy (PN) or nephron-sparing surgery (NSS) is considered the treatment of choice for localized small renal masses with oncological outcome in cases of renal cell carcinoma comparable to radical nephrectomy. The use of NSS has the advantage of preserving renal function with lower cardiovascular mortality and morbidity [12]. The increasing use of body imaging for relatively minor abdominal complaints has resulted in the identification of more and smaller renal tumors. While the historical standard for the treatment of renal tumors, most prominently RCC, has been the RN, PN has become the currently accepted surgical treatment. Current practice is to perform a PN for a solitary renal tumor that are less than 4cm in diameter and do not involve the collecting system. PN has the advantage of preserving renal parenchyma in patients with chronic renal disease and having shown excellent long-term oncological outcomes equivalent to those of (RN) [13-15]. The introduction of novel targeted agents has increased the need of precise data on the epidemiology of renal malignancy. The aim of study is to clarify epidemiological and clinicopathological features of malignant renal tumors in central region of Libya.

This is a cross sectional study of all patients registered in Pathology, and Medical Oncology Department of National Cancer Institute at Misurata (is a referral cancer center in central region of Libya). 57 patients who are proved histopathologically with renal malignancy from January 2014 to December 2019 are included in the study.

Different variables were collected from the medical records and pathology reports. These variables included in structured questionnaires and were filled with

Descriptive analysis of the data was presented as incidence/prevalence ratio, and using of frequency tables and graphs. All variables were analyzed using the software of “Statistical Package for the Social Sciences” (SPSS), version 20.

The study was approved by the ethical committee of the National Cancer Institute- Misurata / Libya.

Computed tomography was requested for all patients, 27 of them (47.4 %) have distant metastases, and 30 patients (52.6 %) have no metastasis (Figure 4). Sites of metastasis (single or multiple lesions) were to the vertebrae and brain in 4 cases (RCC was histopathologically clear cell type with infiltrative to renal capsule), to the lungs in 11 cases, to the liver in 9 cases, to scalp and adrenal gland in 2 cases, to the iliac and long bones in 7 cases, to the duodenum, small bowel, colon and ovaries in 1 case each. 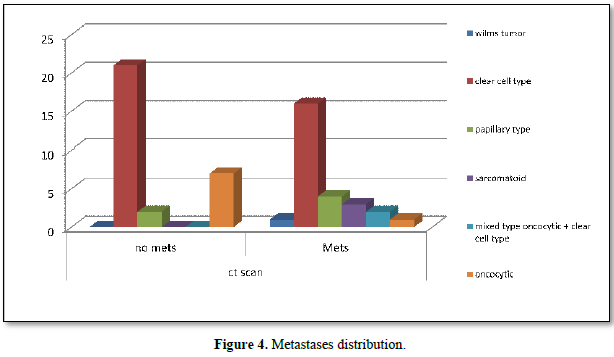 The incidence is higher in countries with high quality of life, and lower incidence in poor quality of life countries (1.0) [17]. Our study revealed the incidence rate per100.000 ranged between (0.9 to 1.11) in central region of Libya, extend from cities Misrata, Zliten, Alkhoms, Sirt which are located in north of Libya and extend to Aljufra and Wedan, in the Libyan Saharan region.

The gender distribution in Table 1, shows that, females (54.4 %) are slightly more affected than males (45.6%) with a ratio of 1:1.19. This result is in contrast to regional and international data which confirmed that renal cell carcinoma is a predominantly male disease. Data from the first population-based cancer registry in Libya published revealed that renal cell carcinoma was more in males, 17 were males and 12 were females [15].

In European Union, ratio was 1.5:1 and, in USA the ratio was 5:1. This difference between our study and other data could be explained by the incidental diagnosis of abdominal malignancy in female patients is higher than in male patients in our population, due to the frequent use of ultrasound and CT scanning in cases of cholelithiasis, urinary tract infections and vague pain, this is approved by Sun et al study where medical images detect small renal masses and have contributed to nearly 50% to the overall incidence in western countries [18].

The analysis of age distribution in this study reveals that; all types of renal cell carcinoma affecting patients older than 40s. This result is in accordance with data from a previous study carried out at two hospitals showed the highest incidence was in age group of 40-60 years [19].

Regarding the clinical presentation at time of diagnosis; the commonest symptom was loin pain in 73.7 % of patients followed by abdominal mass then hematuria. In comparison to a study conducted by Safa et al, which showed that, the commonest presentation was hematuria seen in 55 % of their patients [18]. By far, clear cell type of renal cell carcinoma was the commonest (68.4 %), these data are consistent with international prevalence. Oncocytic type was the second in our study, but in another international cohorts in west of Asia, papillary type is in the second order [20].

The tumor mass size is relatively large, and may reach 10 cm in majority of cases, however; in another study carried out by Ingimarsson [21], shows the tumor size at presentation was 8.4 cm.

Surgery was performed in about 70 % of patients of this study, either conventional open radical or partial nephrectomy. The minimally invasive techniques not done frequently due to lack of facilities. In comparison to another study at Saudi Arabia, minimal invasive technique was performed for 55 % of patients [19]. Wilm`s tumor in the study, only one female patient recorded, which is a small sample to be discussed. Targeted therapy (Selected tyrosine kinase inhibitors (TKIs) targeting angiogenesis) and immunotherapy have been shown to be successful against advanced RCC and increased progression-free survival, our cases presented with advanced stages received mainly Sunitinib and sorafenib [22, 23].