Copyrights: ©2022 Abe N, Oura S & Makimoto S. This is an open-access article distributed under the terms of the Creative Commons Attribution License, which permits unrestricted use, distribution, and reproduction in any medium, provided the original author and source are credited.

Breast cancer is the leading cause of solid malignancy in many developed countries. Compared to other solid malignancies such as lung cancer, gastric cancer, colorectal cancer and pancreatic cancer, vast majority of breast cancers fortunately have been found and diagnosed in an operable condition. Total mastectomy, therefore, has long played an important role in the treatment of breast cancer since the Hasted era and has cured many breast cancer patients [1].

Tumor size is the most important determinant for the application of breast-conserving therapy. In many countries, exclusion criteria for breast-conserving-therapy generally consist of larger tumor size, multiple cancers in different breast quadrants, extensive intra-ductal spread, patients contraindicated for adjuvant radiotherapy, and no patient’s preference for breast conservation. Besides these factors, breast surgeons have often treated breast cancers located close to the nipple-areolar complex not with breast-conserving therapy but with total mastectomy.

We herein report a case of breast cancer located very close to the nipple-areolar complex successfully treated with breast-conserving surgery using our nipple base resection techniques for complete removal of the sub- and partially intra-nipple mammary gland.

An 84-year-old woman with diabetes mellitus (DM) had noticed a breast tumor in the inner and lower quadrant of the right breast for one year. The patient had undergone various surgeries such as coronary artery bypass grafting, aortic valve replacement, and pacemaker implantation in the left chest wall.  Mammography showed circumscribed and lobulated mass just beneath the nipple-areolar complex (Figure 1a). Ultrasound showed an oval mass 4.8c m in size with mixed high and low internal echoes and enhanced posterior echoes. Plain computed tomography (CT) showed the tumor located very close to the nipple-areolar complex (Figure 1b). Aspiration biopsy cytology was done to the tumor and showed atypical cells, highly suggesting invasive carcinoma. We could not evaluate the tumor distribution in detail neither with magnetic resonance imaging nor with enhanced CT due both to the presence of pacemaker in the left chest wall and impaired renal function. Despite the proximity of the breast cancer to the nipple-areolar complex, based on the patient's strong request for nipple preservation, we tried to do partial mastectomy with the preservation of nipple-areolar complex to the patient. Operative procedures were as follows. First, we set a medial horizontal skin incisional line adjacent to the right areola and connected it to a lower semicircular peri-areolar incisional line. Second, we created a skin flap with preserving a certain amount of subcutaneous fat tissue to the flap to ensure venous return around to the nipple-areolar complex. Second, when the flap was almost made to the nipple base with an electrosurgical knife, we bluntly dissected the mammary gland from the subcutaneous fat tissue with a curved Mosquito forceps along with the mammary gland tissue at the lactiferous sinus level. These procedures were initiated at one side of the mammary gland followed by the other side. After enough blunt dissection of the mammary gland on both sides, dissected spaces were connected to each other. Then, one blade of the Mayo scissors was passed through the dissected space beneath the mammary gland and moved the scissors themselves toward the nipple base as close as possible with the blades being kept open. Next, after confirming no excess tissue pinched between the blades of the Mayo scissors, we cut the sub-nipple mammary gland with adequate counter traction to the nipple base by pulling the mammary gland towards the opposite side of the nipple. Finally, we confirmed the nipple base status with no visible sub-nipple mammary gland left on the nipple base followed by pathological confirmation of negative surgical margins in all directions including nipple base on frozen section (Figure 2). The cavity after partial mastectomy, therefore, was sutured without drain insertion to it. Due to the positivity of sentinel node biopsy, lymph node dissection was added to the axilla with drain insertion. Postoperative pathological study showed no positive surgical margins and atypical cells growing in a tubule-forming fashion in the mucous lake, leading to the final diagnosis of mucinous carcinoma. The patient had a high lymph outflow from the axilla, requiring about 2 weeks to be discharged. The patient, however, was re-admitted to the hospital due presumably to DM-induced surgical site infection but showed favorable wound healing without any nipple necrosis (Figure 3). Due to her old age, the patient received neither chemotherapy nor radiotherapy to the conserved breast and has been well without recurrence for nine months. 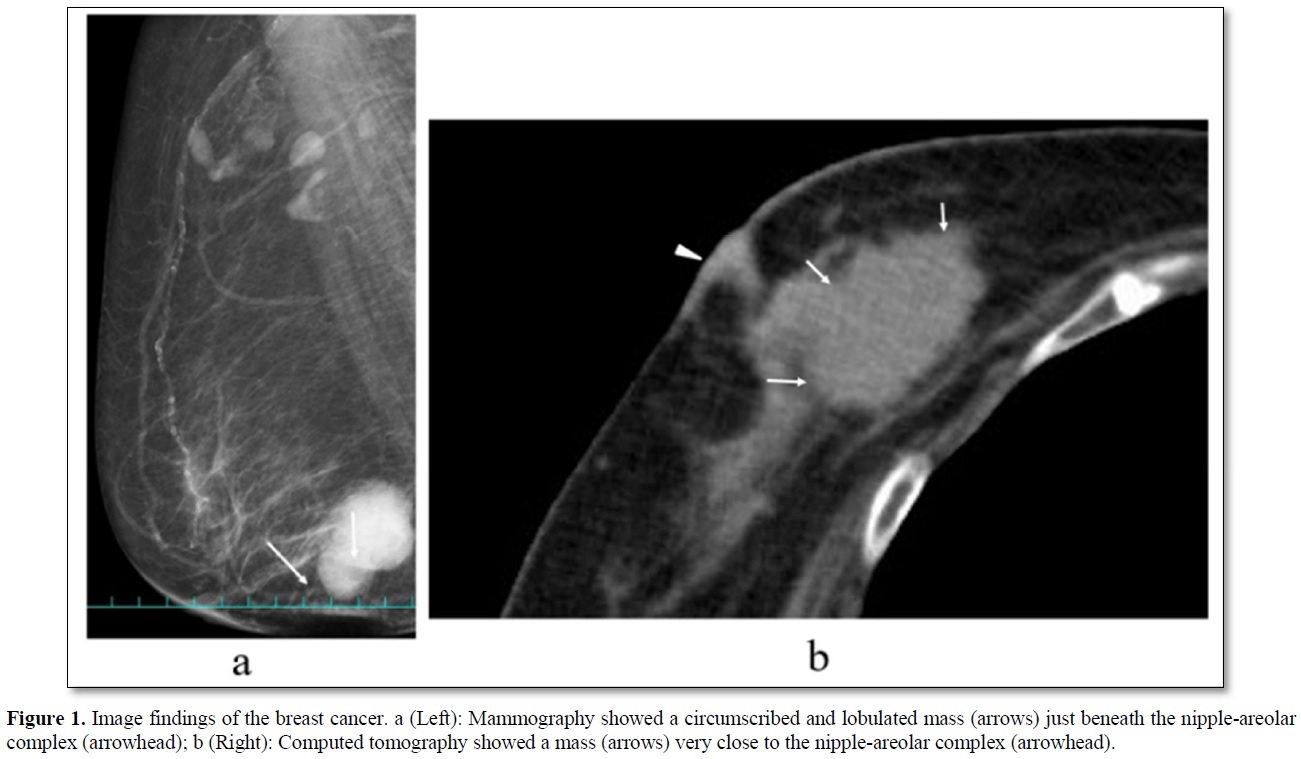 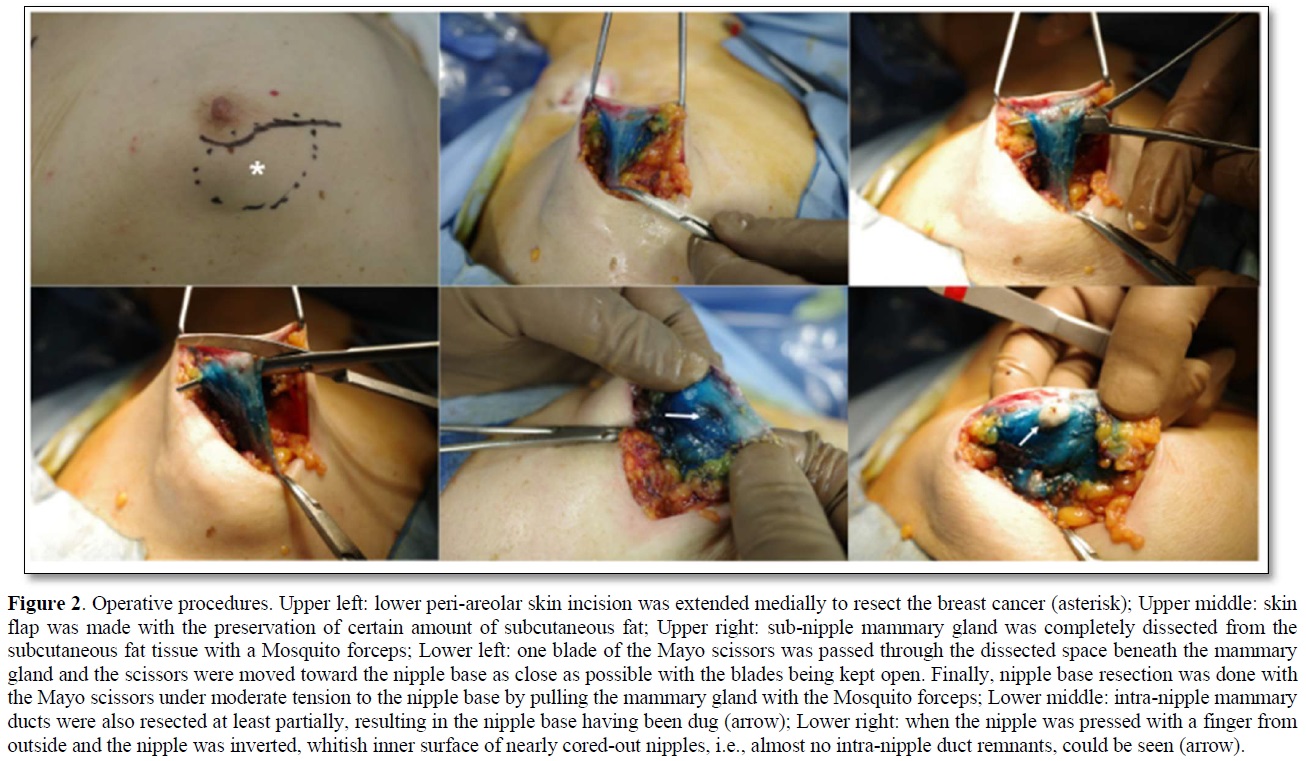 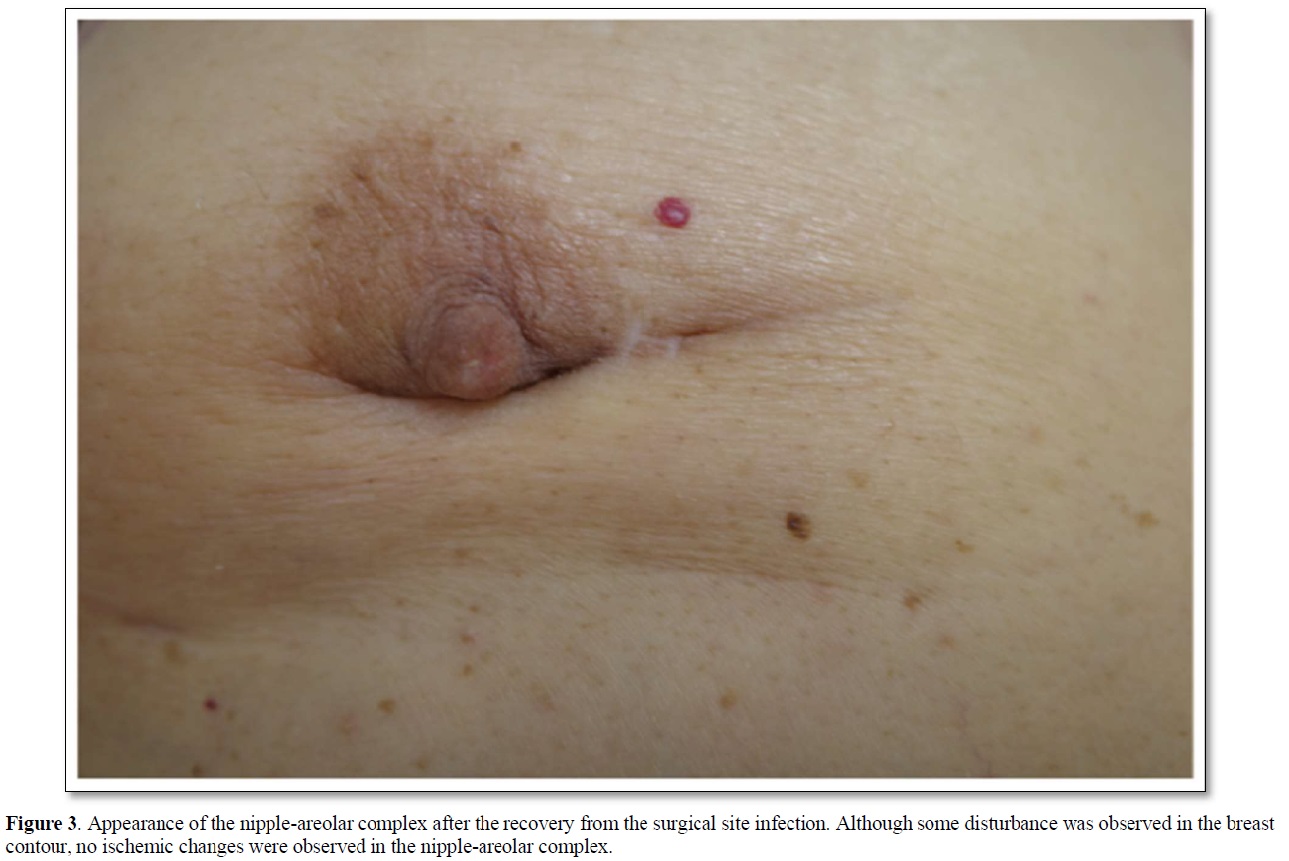 Besides lymphatic permeation and hematogenous spread, breast cancer can widely spread in the breast in a stromal invasion fashion and/or a ductal spread fashion. Even small breast cancers, therefore, have been treated not with breast-conserving therapy but with total mastectomy due to the possible cancer, especially non-invasive ductal cancer, spread mainly toward the nipple-areolar complex. Improvement of spatial resolution of the magnetic resonance imaging (MRI) has made us more accurately evaluate the stromal invasion to the nipple-areolar complex preoperatively than the era without MRI evaluation on one hand [6]. No image modalities including MRI can detect small amount of non-invasive ductal spread to the nipple on the other hand. Unexpected positive margins on frozen section, therefore, sometimes force us to treat the patients not with nipple preservation but with nipple resection, or even with total mastectomy [7]. In this case, we could not precisely evaluate the cancer spread in the breast preoperatively due both to the presence of pacemaker and her renal impairment. We, therefore, intended to resect the possible intra-ductal spread, even if present, between the main tumor and the nipple.

The main points of our nipple base resection technique are as follows. First, certain amount of sub-areolar fat tissue should be preserved to prevent inhibition of venous return from the nipple, i.e., nipple congestion. In order to ensure the safety of preserving the subcutaneous fat around the nipple-areolar complex, it is important for breast surgeons to select the patients suitable for nipple and subcutaneous fat preservation. Therefore, breast cancers with massive lymphatic permeation should be contra-indicated for our surgical procedures and be treated not with primary surgery but with primary chemotherapy followed by some surgery using our nipple base resection techniques, when observed marked response to the primary chemotherapy [9]. Second, breast surgeons should detach the nib-nipple mammary gland from surrounding fat tissue with the curved Mosquito forceps. Because the horizontal cross-section of the sub-nipple mammary gland is oval shape, this blunt dissection procedures are easier with the curved forceps than with the straight forceps. Then, appropriate counter-traction for nipple base enables surgeons to also resect some part of the intra-nipple mammary gland. In addition, our operative techniques safely and uniformly enable breast surgeons to prevent skin damage on sub-nipple mammary gland resection by passing one blade of the scissors into the dissected space just beneath the sub-nipple mammary gland and moving the blades toward the nipple base with the blades being kept open.

The study was approved by the Kishiwada Tokushukai Hospital Ethics Committee (IRB #Case 20-06). Written informed consent was obtained from the patient for the publication of this case report and any accompanying images.

The authors have no conflicts of interest to declare.

No funding was received for this research.

Naoko Abe contributed to the design of the report. Shoji Oura drafted the manuscript.

All data generated during this study are included in this article. Further inquiries can be directed to the corresponding author.