Citation: Iordanis P. (2021) The Role of a Disability in Children in Manifesting a Dermatological Disease. J Derm Allerg Res, 1(1): 1-5.

Copyrights: ©2021 Iordanis P. This is an open-access article distributed under the terms of the Creative Commons Attribution License, which permits unrestricted use, distribution, and reproduction in any medium, provided the original author and source are credited.

Background: Sometimes there are differences in the appearance of skin diseases among patients who belong in different age or work groups. It is well known that some dermatological diseases are more common in children in comparison to other age groups.

Methods: We have exanimated seventy-eight children with a dermatological disease. Half of them have a serious disability and the other half was the control group.

The dermatological diseases are more than 2500. Sometimes there are differences in the appearance of skin diseases among patients who belong in different age or work group. Pruritus and skin cancer are more often in people over 65 years old [1]. Some skin conditions are relevant with personal habits. For example, some transmissible skin diseases are more common to swimmers than the rest of the population [2]. The work conditions are sometimes crucial for the appearance of some dermatological diseases. The outdoor workers may develop in a few years’ photo aging and different types of skin cancer because of the ultraviolet radiation [3]. Environmental factors may be responsible for the development of dermatological diseases [4].

Disability is a common situation and appears in almost 20% of the general population according to the Census Bureau Reports. The percentage of the people with disability is expected to increase [8]. One in nine children has a kind of disability and receives special education services [9]. There are different kinds of disabilities regarding the time of their appearance. Some of them manifest at the date of birth, some of them appear later and others are the result of an external injury [10]. They are many types of disability such as cerebral palsy, autism, attention deficit hyperactivity disorder, mobility disabilities, other mental disabilities, etc. [11].

The situation of each disability is different [12]. The common finding of all disabilities is the difficulty of these persons to have a normal life without social exclusions and special needs [13].

Because of the large number of children with disability we have decided to investigate if there is a difference in the manifestation of the dermatological diseases in them compared to other children [14].

The data are presented by numbers and are expressed as numbers and percentages. This study was conducted in compliance with the ethical standards of the responsible institution on human subjects as well as with the Helsinki Declaration. The patients' parents were informed about the data collection and gave their written consent. 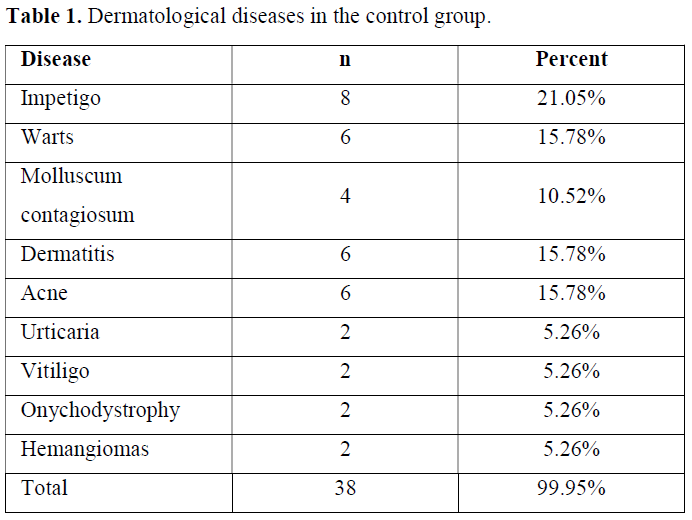 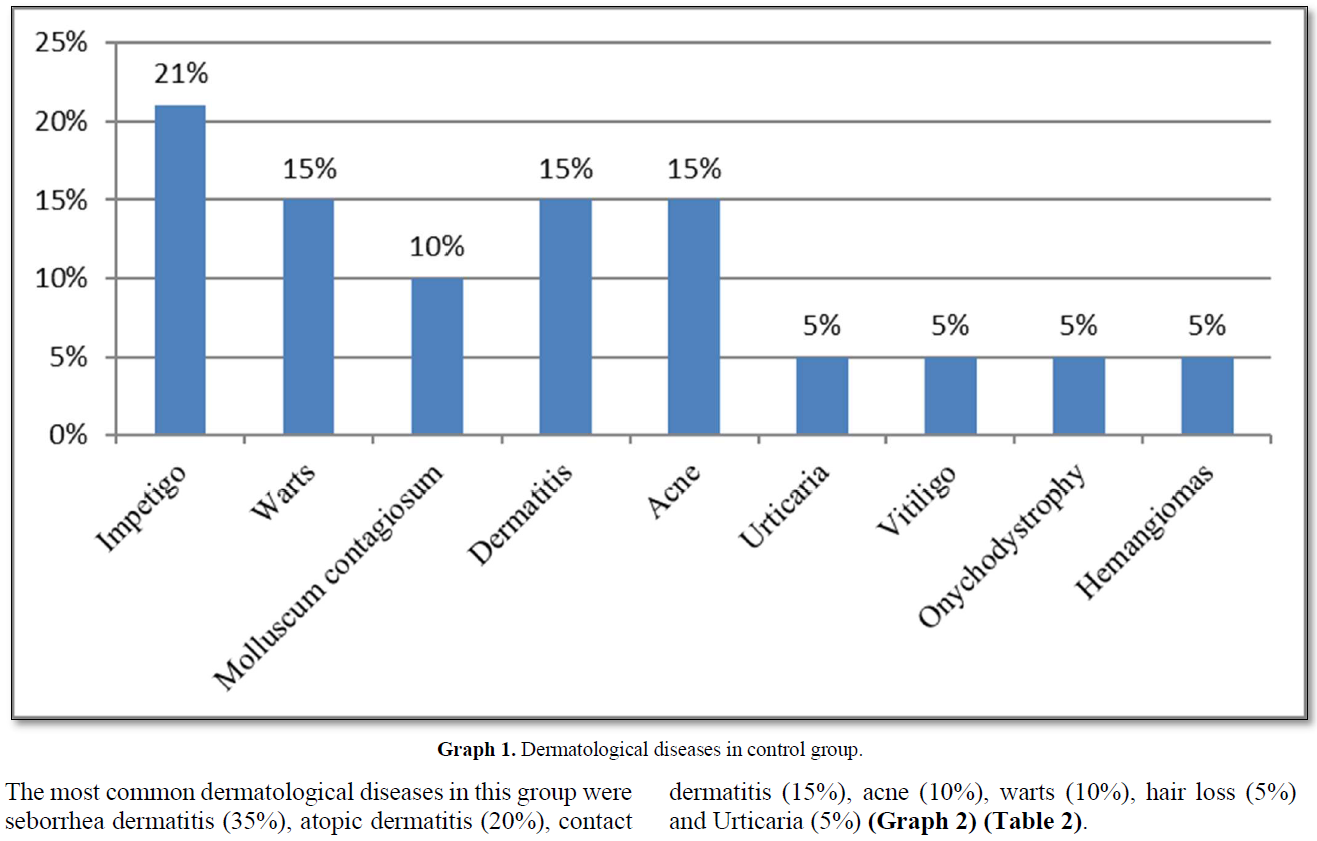 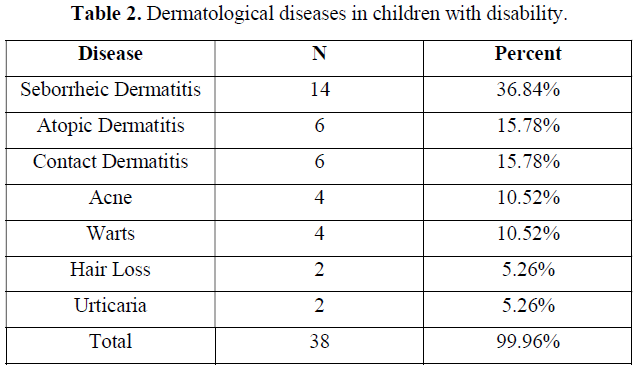 In the group with the children with a disability were twenty-one male and eighteen female patients. The mean age was 12.05 years. The spectrum of the disabilities included cerebral palsy, mental disabilities (autism and attention deficit hyperactivity disorder), Down syndrome and movement disabilities. One of the most common mental disabilities was autism (21%) (Table 3).

The children with any kind of disability are usually lonely because of the social distance. Playing with other children is not usual [19]. It is well known that social exclusion and bullying are common situations in children with disabilities [20]. Physical contact during playing is the most common reason for the transmissible dermatological diseases in children. The fact that children with special needs lack physical contact is one of the reasons that they don’t often manifest transmissible dermatological diseases. Another reason is that the parents or the caregivers of these children take a great attention of their hygiene.

We have noticed that 19% of the children with disability have taken a kind of medication for their condition. Chronic treatment with narcoleptic induced in the most cases seborrhea dermatitis [25].

The decreased social participation creates psychological disorders in people with disabilities and their families [26]. Although children with disabilities are supported by special education programs, their integration into society continues to present difficulties.

In cases of chronic narcoleptic treatment, there should be the cooperation of a psychiatrist and a dermatologist or a general practitioner in order to reduce as much as possible the side effects on the skin [27]. Since dermatological diseases are usually visible in those cases, they might aggravate the social distance. The family and the special trainers play an active role in the reduced presence of dermatological infections by following the rules of hygiene [28].

There was no specific funding source to be mentioned.

The author declares that have no conflict of interest