Copyrights: ©2022 Yoseph T. This is an open-access article distributed under the terms of the Creative Commons Attribution License, which permits unrestricted use, distribution, and reproduction in any medium, provided the original author and source are credited.

Maize (Zea mays L.) is one of the most important cereal crops in Ethiopia. The low productivity of maize has been partly due to the use of drought sucesptible local varieties. The trials were excuted at Dasenech, Gyngatom and Hammer woredas, Debub Omo Zone of Southern Ethiopia using four released and one farmer maize varieties under irrigated conditions in 2019. Four improved (Melkass-4, Melkassa7, MH140, MH6Q, and one local) maize varieties were involved in the treatment. The trial was carried out using a randomized complete block design with three replications under irrigation at Dasenech, Gyngatom, and Hammer during the 2019 cropping season. The combined result showed significant differences observed among the varieties for the traits under study. A maximum plant height of 196.33 cm was recorded in the local check, while the minimum plant height of 167.78 cm was noted for Melkassa-4. Ear length ranged from 21.667 cm in the local check to 27.778 cm in MH140. Hundred seed weight ranged from 28.889 g in the local check to 34.444 g for MH6Q. Seed yield ranged from 2653.9 kg ha-1 in the local check to 4977.4 kg ha-) for MH6Q. Maize varieties MH6Q 4977.4 kg ha-1 and Melkassa-4 3922.6 kg ha-1 could be recommended for the study areas and other similar agro-ecologies for improved maize production and productivity.

Maize is one of the most important cereals after wheat and rice in world agriculture and is widely distributed in the world [1]. It is originated in Central America and introduced to West Africa in the early 1500s by Portuguese traders [2]. Maize is the most important cereal food crop in sub-Saharan Africa (SSA), particularly in eastern and southern Africa where it accounts for 53% of the total cereal area [3], and about 30-70% of the total caloric consumption obtained from maize [4]. Maize was introduced to Ethiopia during the 1600-the 1700s [5]. It is currently grown across 13 agro-ecological zones which together cover about 90% of the country. Moreover, it is an increasingly popular crop in Ethiopia. For many years, maize in Ethiopia has been the first in production and second next to tef (Eragrostis zuccagni (Zuccagni) Trotter) in the area of cultivated land [6]. The importance of maize in the country’s agricultural economy and household-level food security calls for increasing its production and productivity through the use of modern technologies [7].

Maize is one of the most important cereal crops in Ethiopia, ranking second in area coverage and first in total production. Although it is one of the strategic crops for the achievement of food security in the country, more than 90% of the production is handled by small-scale farmers under rain-fed growing conditions. About 40% of the total maize growing area is also located in low-moisture stress areas, where it contributes less than 20% to the total annual production. The low yield in these areas, like other sub-Saharan African countries, is mainly attributed to recurrent drought, low levels of fertilizer use, and low adoption of improved varieties.

Maize is one of the most important cereal crops in the Southern region in general and the Debub Omo Zone in particular. Even though maize is important in the study area, several factors constrained its productivity. This is due to the lack of improved varieties associated with biophysical factors that have been appreciated as one of the primary sources of lower maize production. There had no trend of using improved maize varieties in the existing production system so it is the bottleneck problem in the target area. Therefore, this study is initiated to select the best-performing maize varieties in the study area.

Five maize (Melkassa-4, MH140, MH6Q, Melkassa-7 improved, and a local check) were included in the study. Field experiments were laid out in a randomized complete block design with three replications. Maize was sown in ten rows per plot with a spacing of 75 cm between rows and 25 cm between plants with a gross plot area of (7.5  m x 10 m  = 75 m2).

The combined result revealed significant variations observed among the maize varieties for plant height (Table 1). This result is in line with the report of Tekle (2014) on lowland maize varieties, which coincides with results reported by Wedajo and Tekle (2014) on midland maize varieties. Similar results were reported by the previous findings [8,9] on maize, indicating that there existed significant variations among the maize varieties in this study. The maximum plant height of 241 cm was recorded for the local check at Gyngatom while the minimum of 143 cm was obtained for Melkass-4 at Dasenech (Table 2). Plant height ranged from 167.78 cm for Melkassa-4 to 196.33 cm for the local check (Table 3). 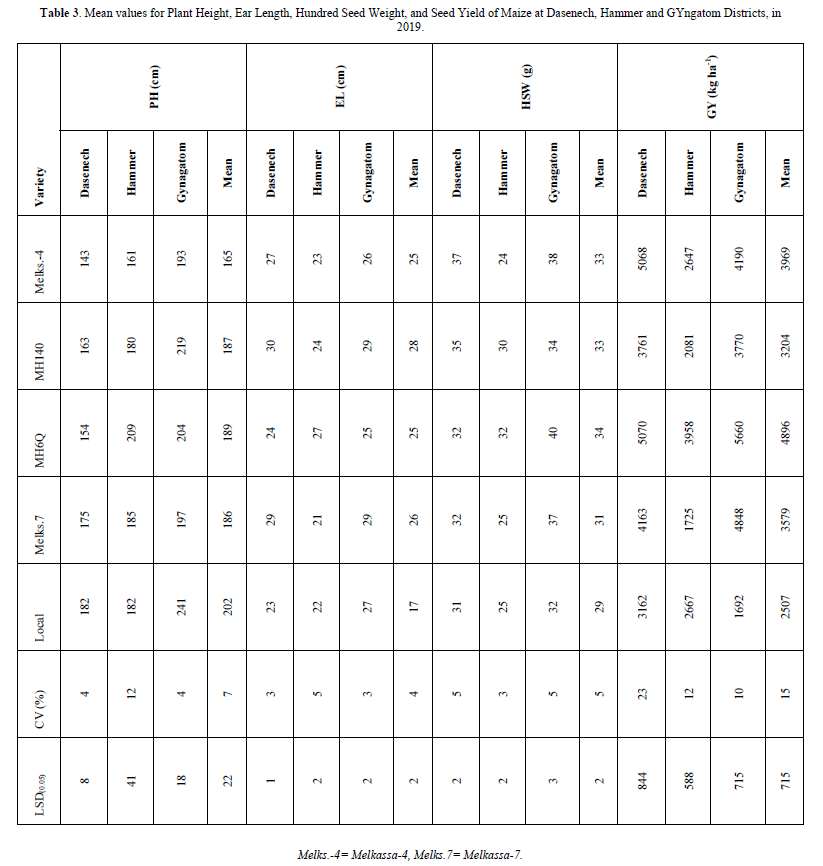 The result exhibited that there were significant differences noted amongst the varieties for ear length (Table 1). Maximum ear length of 30 cm was recorded for MH140 at Dasenech while the minimum 21 cm was noted for Melkassa-7 at Hammer (Table 3). Ear length ranged from 21.66 cm for the local check to 27.78 cm for MH140 (Table 2).

The result showed significant variations among the varieties for seed yield (Table 1). This result agreed with the report of Akbar [10], Ahmad [11], Hussain [9], McCutcheon [12]. While, contrasting result was reported by Olakojo and Iken [8]. The maximum seed yield of 5660 kg ha-1 was recorded for MH6Q at Gyngatom and the minimum 1692 kg ha-1 was noted for the local check at Hammer (Table 3).

The result indicated significant variations observed among the varieties for all the studied parameters. Based on the overall mean yield, the best-performing varieties such as MH6Q 4977.4 kg ha-1 and Melkassa-4 (3922.6 kg ha-1) would be recommended.