Copyrights: ©2022 Orsi DC. This is an open-access article distributed under the terms of the Creative Commons Attribution License, which permits unrestricted use, distribution, and reproduction in any medium, provided the original author and source are credited.

Recently, there has been an increase in the production and consumption of craft beer in the Brazilian market [1,2]. The main characteristic of craft breweries is to emphasize flavor and brewing techniques and thus compete with the mass-market breweries for quality and diversity rather than low prices [3]. Consumers choose craft beers over conventional beers, as they have a variety of styles, flavors, and aromas, and are superior in quality [4].

The perceived quality of beers produced with local ingredients as fruits, herbs and spices represents an important element for the successful development of craft breweries, as it corresponds to the consumer's desire to rediscover the authenticity of local products [4,5]. The use of fruit in craft beers provides unique sensory attributes, with characteristic flavors and aromas, becoming a consumer preference factor [6].

Fruits have been used as beer adjuncts for centuries, especially in Belgian Lambic style, where cherry or raspberry is traditionally added to beers [7,8]. Currently, the fruit beer market is expanding, and nowadays consumers can find fruit beers made of strawberry, cherry, raspberry, blackberry, apricot, peach, plum, tangerine, orange, grape, and apple available in the markets [8,9].

Sapodilla (Manilkara sapota L.) is a tropical fruit native to Central America, and in Brazil, it is cultivated mainly in the northeastern region, due to the hot and dry climate conditions associated with irrigation. The fruit is a large ellipsoid berry, in general from 4 to 8 cm up to 15 cm wide, containing few seeds (two to five big seeds) and when fully ripened it presents high pulp yield and very sweet flavor. In the various countries where sapodilla is produced, it is mostly consumed fresh or used to produce jams, compotes, and juice [10,11]. Considering that there is still no sapodilla fruit beer in the Brazilian market, the aim of this study was to elaborate fruit beers using sapodilla pulp and evaluates its physicochemical and sensory characteristics.

Sapodilla fruits were obtained in a market of local farmers of Distrito Federal (Brazil). The sapodilla fruits came from the northeastern state of Pernambuco, Brazil. The dry ale yeasts (Safale US-05) were purchased from Fermentis Ltd. (Marcq-en-Baroeul, France). Pilsen malt from Germany, Château Cara Gold malt from Belgium and Nugget hops from USA were purchased from a specialized store and used for the wort production.

The wort was prepared from 3.0 kg of Pilsen and 1.5 kg of Château Cara Gold type malts which were crushed to the appropriate size resulting in 4.5 kg of ground malt and mixed with 12 L of water. The mashing process was carried out in three heating steps: 20 min at 50-55°C, 20 min at 60-65°C and 25 min at 70-75°C. After, wort was filtered, and the solid part was washed using 8 L of mineral water at 78°C. Subsequently, the liquid part proceeded to the boiling step and the solid part was discarded. The wort was boiled for 60 min and during this process 30 g of hops were added. The boiled wort was separated from the hot trub and then cooled at 18°C. Prior to fermentation, the yeast (0.7 g/L) (Safale US-05) was rehydrated and added into the wort. The sapodilla pulp was also added into the wort before the fermentation. The fermentation was carried out in a fermenter with sealed lid and airlock coupled for 10 days at 20°C. After the fermentation process, the yeasts and sapodilla bagasse settled at the bottom of the fermenter and the green beer was transferred to another fermenter, and this sediment was eliminated. The green beers were kept at 5ºC for 15 days to obtain matured beers. The beers were filled in 600 mL amber glass bottles and glucose syrup (1 g/L) and a yeast suspension (0.2 g/L) were added for the carbonation process. Bottled beers were sealed and stored at room temperature for 15 days to form carbon dioxide.

Addition of sapodilla (Manilkara sapota L.) pulp into the wort

The soluble solids were determined through refractometer Shimadzu and expressed in °Brix. The pH was measured using a digital potentiometer Micronal B222 and total acidity was determined by titration with 0.1 N NaOH [12]. Reducing sugars were determined using the 3,5-dinitrosalicylic acid method [13]. Total polyphenols were determined by the Folin-Denis method [14], using gallic acid as a reference compound. The in vitro antioxidant activity was performed through the evaluation of free radical capture DPPH [15] and ABTS [16]. The results were expressed as Trolox equivalents (mM TEAC) and calculated from a standard curve. The alcoholic content of the beers was determined using a Gay-Lussac alcoholometer placed directly in a volume of 250 mL of distillate at 20°C [17].

The sensory analysis of the beers was performed by a well-trained panel of 12 evaluators of both sexes aged between 21 and 60 years. Each evaluator received 70 mL of each beer sample at approximately 8°C, coded with three random digits. Mineral water and salt and cracker were also served to clean the palate. Flavor, aroma, appearance (color and turbidity), and global acceptance of beers were evaluated following nine-point hedonic scale (9 = like extremely, 8 = like very much, 7 = like moderately, 6 = like slightly, 5 = neither like nor dislike, 4 = dislike slightly, 3 = dislike moderately, 2 = dislike very much, 1 = dislike extremely) [18].

Data were expressed as mean values ± standard deviation of three independent replicates. Physicochemical and sensory analyzes results were submitted to analysis of variance (ANOVA) and the means were compared by Tukey test (Statistica 10®, Statsoft Inc). Results were considered significantly different when p values were ˂ 0.05. 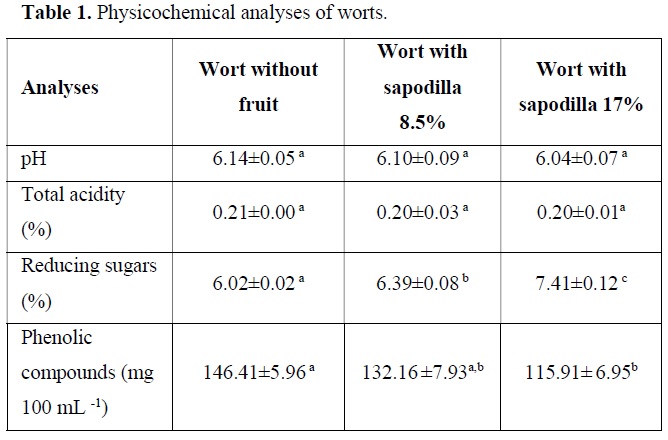 Values are the means ± standard deviations of triplicate measurements. Values in the same line with different letters are statistically different (p < 0.05).

The values of reducing sugars in the worts of this study ranged from 6.02 to 7.41%. The reducing sugars represent the main fermentable sugars (maltose and glucose) of the brewer's wort [20]. The addition of sapodilla pulp in the worts contributed to the increase the sugar content in relation to the wort without fruit. According to Oliveira [21], sapodilla is a fruit with a high content of sugars in its composition (11.2%). Kawa-Rygielska [19] also observed an increase in the concentration of sugars comparing the wort without fruit (7.97%) and the wort with addition of red Cornelian cherries (8.22%). Nunes [22] reported that the wort with the addition of 30% of cocoa pulp had 8.20% of fermentable sugars (glucose, fructose, and maltose).

Values are the means ± standard deviations of triplicate measurements. Values in the same line with different letters are statistically different (p < 0.05).

The addition of sapodilla in beers increased their alcohol content (4.60-5.60ºGL) in relation to beer without fruit (4.00ºGL). Martinez [9] reported similar results and ethanol content of the beers depended on the initial reducing sugar concentration in their formulations and, therefore, those containing more persimmon juice contained more alcohol (100:0, 75:25, 50:50 and 25:75% wort-persimmon beers contained 2.91, 3.64, 4.72 and 5.63% ethanol, respectively). Zapata [28] reported that the addition of quince to beer slightly increased its alcohol content. The beer without fruit was the one with the lowest alcohol concentration (5.27%), while the beers with quince fruits had alcohol concentrations of 5.51-5.62%. Nunes [22] also reported that compared with the beer produced without fruit, an increase in ethanol production was observed with the addition of cocoa pulp as an adjunct in fruit beer that presented 5.95-6.02% of ethanol. Thus, the addition of fruits rich in sugars has the potential to increase the alcohol content of fruit beers.

Moderate consumption of beer can have a positive effect on human health. Beers are rich in vitamin B, minerals, and biologically active components. In beers, folic acid is found in relatively high concentrations. The most common polyphenols of beers are simple phenols, phenolic acids, benzoic acid derivatives, cinnamic acids, flavanones, flavanols, flavonols, isoflavones and flavones. These polyphenols are antioxidants and protect against oxidative stress caused by reactive oxygen and nitrogen species. Thus, drinking beer has been reported to increase plasma antioxidant activities and positively affect plasma lipid levels in humans. In addition, moderate beer consumption has been reported to exert protective effects on cardiovascular risk factor [8,29].

Values are expressed as means. Values in the same line with different letters are statistically different (p < 0.05).

Our study showed that it is important to carry out tests to define the best concentration of fruit in the beer formulation, to obtain a good sensory acceptance of the product. Other studies also described tests where the concentration of fruit in the beer formulations varied. Castro Marin [32] added different amounts of juice (5, 10 and 20%) from Lambrusco red grapes to Lager wort, before primary fermentation. Contrary to 5 and 10%, the addition of 20% of red grapes juice significantly impacted the olfactory and gustative descriptors, being described as more astringent, fruity, and acidic beer. Zapata [28] added quince fruits at different percentages (5, 10 and 15%) to a standard Ale beer. After sensory analysis, the evaluators decided that the addition of a 10% of quince fruit to the beer was the best formulation, providing proper beer flavor, but getting the plus of getting quince key notes and no off-flavors. Kyung-Mi [7] also tested different concentrations of peach (3, 5 and 8%) in beer formulations and based on the overall acceptability score, the optimum proportion of peach fruits to be added was 5%.

The production of craft beer with sapodilla was successful. It was important to study the amount of fruit pulp to be added in the formulation of beers, as the beer with 8.5% sapodilla had a good sensory acceptance, while the beer with 17% sapodilla was not well accepted. Due to the high concentration of sugars present in the fruit, beers with sapodilla had higher alcohol content when compared to beer without fruit. Thus, it is possible to increase the quality of beer by adding sapodilla fruits, which positively impacted the flavor and aroma of the product.

The authors declare that they have no known competing financial interests or personal relationships that could have appeared to influence the work reported in this paper.