Copyrights: ©2022 Ali A, Zam W & Husein F. This is an open-access article distributed under the terms of the Creative Commons Attribution License, which permits unrestricted use, distribution, and reproduction in any medium, provided the original author and source are credited.

Background: This study aims to explain the efficiency of the antimicrobial activity of Thyme (T) and Oregano (O) and mixtures of different proportions of their extracts with Glycerin.

Results: The results showed that the best efficacy was for mixture (T100O00) followed by mixture (T75/O25), also all extracts showed the highest antibacterial activity against Streptococcus pyogenes followed by Staphylococcus aureus.

Conclusions: This study demonstrated the high antimicrobial activity of Thyme, and confirmed the good efficacy of glycerin as a green solvent in addition to clarifying the importance of maceration for extracting the active compounds from essential oils.

One of the common problems in treatment is the emergence of drug resistance such as the multidrug-resistant microorganisms (Acinetobacter baumannii, Escherichia coli, pseudomonas aeruginosa and staphylococcus aurous) which has become a major global problem in hospital environments and is considered to be one of the main causes of health care infections and has caused increased morbidity and mortality rates [1,2]. This phenomenon has led to the development of new types of antimicrobials, It has been suggested to find alternatives to pharmaceutical antibiotics, and the most important alternatives that exist are essential plant oils, which have been discovered as important and promising alternatives used as antimicrobials, Studies have indicated that the antimicrobial effect of plant essential oils is attributed to their ability to synthesize aromatic substances and that most of these substances are the usual phenols or oxygen-substituted derivatives [3].

Essential oils have been extracted from a complex mixture of volatile molecules by secondary metabolic reactions of medicinal plants [4], and these aromatic oil liquids can reduce the incidence of foodborne diseases and also delay lipid oxidation [5].

The Mediterranean region is considered one of the regions that contains many aromatic plants, due to its favorable climate and geographical morphology [6]. Among these aromatic plants are Thyme (Thymus vulgaris) and Oregano (Origanum vulgare), considered among the most important plants found in the Mediterranean region and belonging to the (Labiatae family). Added to food products [7], these aromatic herbs have been used to give foods flavor and aroma, while at the same time considered to have antibacterial properties. These properties are, due to their composition, rich in essential oils and tannins [8]. Many essential oils such as Thymol, Carvacrol, Menthol and Anethole found in both thyme and oregano can inhibit the growth of bacteria and yeasts and are used to prevent the growth of germs [9,10].

Glycerin or propane-1,2, 3-triol (also glycerol) is a trivalent alcohol that is used in a variety of applications such as cosmetics, tobacco, food, medicine, paper, moisturizing agents, asphalt, ceramics, imaging products, and leather. It can be produced by bacterial fermentation [11], in addition, it can act as a suitable solvent for the active ingredients in the formulation, glycerol’s ease of compatibility with many substances, Due to its hydroxyl groups, it has similar solubility properties to water and simple aliphatic alcohols. It is a good solvent for pharmaceuticals and flavor extracts. Many Materials such as iodine, tannin, alkaloids, thymol, phenol, and boric acids are more soluble in glycerol than in water, and therefore it is used to prepare highly concentrated solutions of these materials [12].

Several studies have shown that the essential oils for Thyme and Oregano have antimicrobial activity against a wide range of pathogenic resistant microorganisms.

Varga [13] found in his study of the essential oils of thymus vulgaris that it has antimicrobial activity against different types of bacteria including pseudomonas aeruginosa and streptococcus pyogenes. Saghi [14] studied the antibacterial effect of Origanum vulgare against Acinetobacter baumannii, where the results showed the high effect against the drug-resistant strains.

This Study aims to demonstrate the antimicrobial activity of extracts of Thyme and Oregano against Pseudomonas aeruginosa, Klebsiella pneumoniae, Enterobacter cloacae, Acinetobacter boumannii, Staphylococcus aureus, Streptococcus pyogenes, Proteus mirabilis and Escherichia coli, the extracts were obtained by macerating in glycerin for 10 days.

Thyme and Oregano samples were collected from mountains of the Syrian coast during the flowering stage, and samples were dried in the shade and then placed in black bags away from moisture and light at room temperature until use, the samples to be tested were milled by a home coffee grinder. 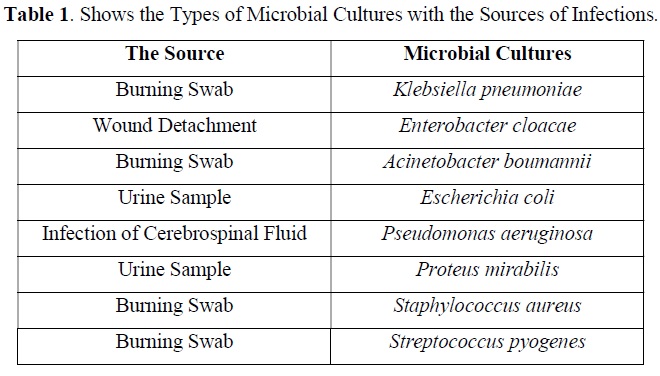 The antimicrobial activity was evaluated by the agar-well diffusion assay, which is used to study the antimicrobial effect of plant extracts [16]. In this method, Muller Hinton Agar and chocolate agar were used in an amount ranging from 15-20 ml and were poured into sterile Petri plates and left to solidify. The agar surface within each plate was inoculated by spreading a certain volume of bacteria to be tested with a sterile cotton swab. Holes were created at the center of the agar plate surface and then 100 ml of each extract sample injected into the hole by a micropipette. The plates were left to standby for 30 minutes and then incubated at 37°C for 24 h. The plates were examined to monitor bacterial growth inhibition, which was characterized by the appearance of a transparent aura around the holes. The bacterial growth inhibition zone around the holes was measured in (mm); including measurement of the diameter of the hole, and the antimicrobial activity was expressed by measuring the diameter of the inhibition zone resulting from the effectiveness of the extracts against the tested bacterial strains. 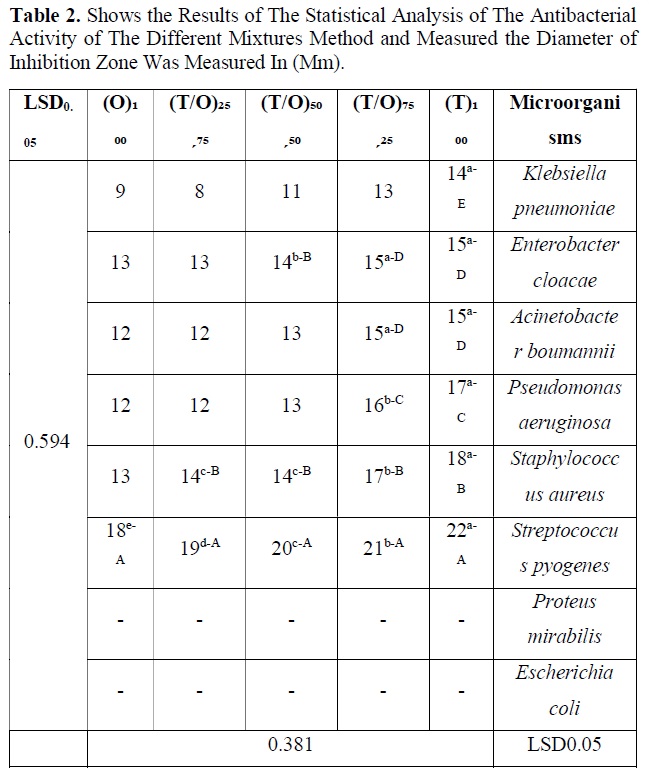 The outer membrane of Gram-negative bacteria forms a barrier that blocks the arrival of antibiotic macromolecules; in addition, the periplasmic space contains enzymes that are able to break down foreign particles coming from outside [18,19].

The responsible factors of the results in this study impact on antimicrobial activity of oily Thyme and Oregano extracts, the type of solvent, the concentration of extracts and the emerging reactions lead to a change in the inhibition zone diameter according to the tested bacterial type [20]. The type of solvent has a significant impact on the results as the solvent used in this study is glycerin while most other studies which studied the antimicrobial activity of Thyme and Oregano used pure essential oil obtained by distillation. Also, the chemical composition and amount of essential oils depend on the time of harvest, the geographical location, the environment, stage of maturity, the part and type of plant used, the climate of the region in which the plant was grown, as well as the method of extraction [21,22]. These differences significantly affect the antimicrobial activity against the pathogenic bacteria, for example, carvacrol and thymol, which are considered as one of the main components of aromatic Oregano oil, showed differences according to origin, which in turn is reflected on the antimicrobial property [23], Studies suggested that the antimicrobial mechanism of thymol and carvacrol, which are the main components in Thyme and Oregano, depends on their ability to degrade the outer membrane of Gram-negative bacteria, release lipopolysaccharides and increase the permeability of the cytoplasmic membrane to ATP12, for example , Boskovic et al. used in his study essential oils obtained from Thyme and Oregano collected during flowering stage, which could explain their high amount of phenolic compounds. It has also been showed that environmental elements from herbs harvested during or immediately after flowering have the strongest antimicrobial capacity [5].

Thymol is the main component responsible for the antimicrobial activity of Thyme, and its efficacy is due to the ability to bind with membrane proteins via hydrophobic and hydrogen bonds, thus altering the permeability of the membranes. Thymol also reduces intracellular ATP, and increases extracellular ATP, and this leads to the destruction of the function of plasma membranes [24], Carvacrol has a free carboxyl group that affects the activate of the cytoplasmic membrane of bacteria, which leads to depolarization and increases its permeability to potassium and protons, it thus disrupts its function, which leads to bacterial death [25].

There are many studies that have indicated the effectiveness of Thyme and Oregano essential oils as an effective antibacterial. Trojanowska [26] found that pure Thyme oil has antibacterial activity against Acinetobacter boumannii strains taken from clinical isolates following the disc diffusion method and the diameter of inhibition zones ranged from 26 - 44 mm.

In another study conducted by Donaldson [27] on the essential oils of Thyme and Oregano following Disk diffusion assay, the results of the inhibition zone of Staphylococcus aureus were 15.58 mm for Thyme and 13.08 for Oregano; and this study is in line with our results [27], also Tanasescu [28] studied the antibacterial activity of the essential oil of Oregano against Streptococcus pyogenes following disk diffusion method and the diameter of the inhibition zone was 25 mm.

The results of this study proved that Thyme cultivated in the Mediterranean coast region has an effective antibacterial activity against a wide spectrum of pathogenic bacteria, as well as the mixture (T75O25) showed an activity close to the effectiveness of thyme, especially on resistant microorganisms such as Pseudomonas aeruginosa, therefore these two mixtures can be considered as antimicrobial preservative agents, so that could be used in food preservation and manufacture of medical products. Also, the extraction with glycerin as a solvent shows good efficiency and this method can be adopted on as one of the effective extraction methods such as distillation and decoction.

All thanks and appreciation to the staff of the bacterial culture laboratory at Al-Basel Hospital in Tartous for their good cooperation and provision of facilities to accomplish this work.