Copyrights: ©2022 Mahmood TA, Hashim ZS, Saud A, Abdulkadhm A & Bader HM. This is an open-access article distributed under the terms of the Creative Commons Attribution License, which permits unrestricted use, distribution, and reproduction in any medium, provided the original author and source are credited

Background: We described a patient with spontaneous pneumocephalus probably arising from Sternberg’s canal of the sphenoid sinus. Spontaneous Pneumocephalus (PNC) associated with Cerebrospinal (CSF) fluid leaks and Intrasphenoidal Meningocephalocele are extremely rare findings and represent a condition bearing serious risks for the patient. Sternberg’s canal is a lateral craniopharyngeal canal resulting from incomplete fusion of the greater wings of the sphenoid bone with the basisphenoid. It acts as a weak spot of the skull base, which may lead to develop a temporal lobe meningocephalocele protruding into the lateral recess of the sphenoid sinus (SS).

Case description: A 27-year-old male, presented with left cerebrospinal fluid (CSF) rhinorrhea, referred from the neurosurgical department with severe headache, and low-grade fever. Radiological investigations consisted of computed Tomography (CT) scan, this imaging study identified a soft tissue density Through a bony defect which communicates the middle cranial fossa with the lateral recess of the SS, and pneumocephalus of left temporal lobe.  Patient underwent an Endoscopic Endonasal repair of the defect. There was no complication related to the surgical procedure and no recurrence of CSF leakage occurred 4 months after surgery.

Conclusion: A persisting Sternberg’s canal should be considered the source of Spontaneous Pneumocephalus and CSF-leaks with or without meningoencephaloceles in sphenoid sinuses with extensive lateral pneumatization, especially when located laterally and below the maxillary nerve. Endoscopic endonasal surgery is safe as no intraoperative complications occurred in our patient. It is less traumatic, providing a good access and view of the surgical field. Our case is among the rare reported cases.

Pneumocephalus is defined as intracranial air (Extracerebral, Intracerebral, Intravascular compartment), result from an abnormal communication between an air-containing structure (most commonly the paranasal sinuses and temporal bones) and the subarachnoid space through a tear in the meninges and a fracture of the skull base. The majority of pneumocephalus cases are due to trauma. Spontaneous pneumocephalus is a rare condition, which represented only 0.6% of pneumocephalus occur due to osteodural defect adjacent to the paranasal sinuses/Sternberg’s canal. tension pneumocephalus, air under pressure, leading to serious neurological complications or even death. Such cases call for urgent repair of the Skull Base defect regardless of its etiology decreases by 10-15 days and never is present by 3 weeks [1-3].

The sphenoid sinus spontaneous leaks which; although rare, are more common in this location than secondary leaks. Embryologically, the sphenoid bone develops from four parts: the presphenoid (forming the anterior sphenoid bone; the basisphenoid (forming the posterior sphenoid bone); the orbitosphenoid (forming lesser wings); and the alisphenoid (forming greater wings and lateral parts of the pterygoid process). The fusion of which occurs after birth from the anterior to posterior regions. Just before complete fusion, a canal-connecting middle cranial fossa and nasopharynx called the lateral craniophangeal" or Sternberg's canal (named after Sternberg in 1888, although first described by in 1877) is formed. This canal closes by the age of ten years through ossification. Persistence of this canal into adulthood may be the cause of a potential CSF leak. persistent Sternberg's canal incidence ranges from 0.42-6.19%) [4].

A 27-year-old male, pharmacist, married, have no child, known case of tonic-clonic focal seizure (Déjà vu) with chronic use of keppra 500 mg {1.5 g × 2} since 2018, Referred from neurologist to the Neuro rhinology/ENT department. As a history of 3-days unilateral left sided clear, watery rhinorrhea, as drops then became profuse amount salty in taste preceded by one attack of (Déjà vu) at a period of less than 1 week, associated with severe headache aggravated by head movement (increase in supine, decrease in sitting position) with drowsiness, left sided pulsatile tinnitus and low-grade fever.

A computed tomography (CT) scan revealed a defect in the middle cranial fossa communicated to the lateral recess of the left Sphenoid Sinus and a soft tissue density within the sinus, with air void signal extended in to the left temporoparietal and frontal hemisphere (Figures 1-4). It appeared to be due to persistence of the Sternberg’s canal.

The patient underwent endoscopic endonasal trans-sphenoidal approach surgery by a Neurorhinologist/ Endoscopic Skull base surgeon. The bony defect in the Left SS lateral recess was identified during the procedure and the protruded meningencephaloocele (Figure 5) was reduced in volume by bipolar cauterization and the defect was filled with bone of middle turbinate, fat and fascia lata from anterolateral aspect of thigh.

There was no complication related to the surgical procedure. No recurrence of CSF leakage occurred after 4 months of surgery. 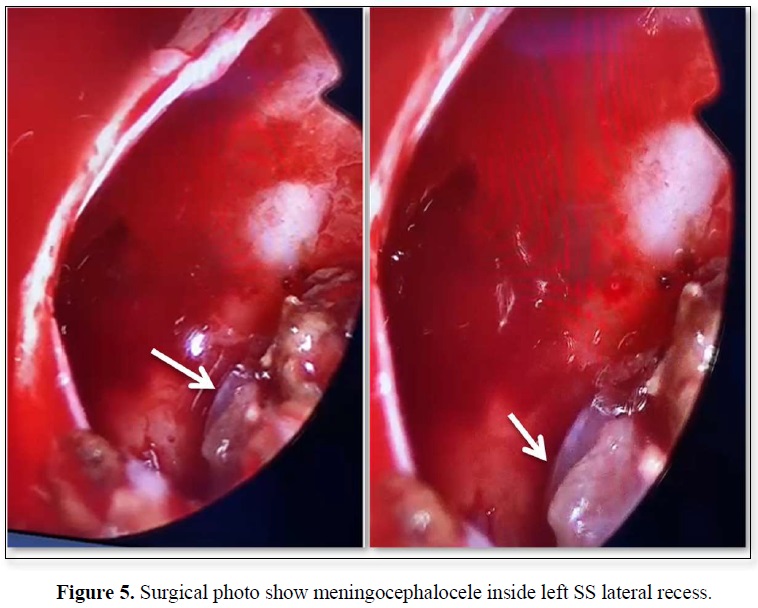 Our case is among the very uncommon cases of spontaneous pneumocephalus in lateral recess defect of sphenoid sinus.