Effectiveness of Nux Vomica in Pain Management of Cervical Spondylosis

Copyrights: ©2022 Tharani M, Siju V, Sisir PR, Mohan CK, Sugathan NV, et al. This is an open-access article distributed under the terms of the Creative Commons Attribution License, which permits unrestricted use, distribution, and reproduction in any medium, provided the original author and source are credited.

Methods: A total number of 30 cases were randomly selected based on inclusion and exclusion criteria. Diagnosis has been made based on their clinical presentation and X –ray findings. Nux vomica was prescribed to the patients, if the constitutional score indicated the remedy and the potencies were selected based on the patient’s susceptibility and the subjects were observed for changes in pain. All the cases were followed for a minimum period of 2-6 months. VAS was used as a pain rating scale to record the intensity of pain before and after clinical management. The study was subjected to statistical analysis and results were made from observations.

Results: It was found that females especially housewives were mostly affected with cervical spondylosis. The middle age group is found to be commonly affected. The disease was more prevalent among people above 4th decade of life but nowadays its onset begins from an early age. Cervical pain aggravating with movement was present in all the 30 cases and other symptoms such as neck stiffness, referred pin, vertigo, suboccipital/frontal headache, numbness, tingling and weakness were also present as associated symptoms. Studies revealed that out of 30 cases treated with Nux vomica 200 potency was the most frequently used potency of Nux vomica.

Interpretation and Conclusion: On analysis of pain and improvement criteria scores, the role of Nux vomica in the pain management of cervical spondylosis was found to be effective. Thus, we can conclude that the administration of Nux Vomica based on symptom similarity could give good relief to pain as well as symptomatic relief to the patients with cervical spondylosis.

Homoeopathy claims to be “The science of Therapeutics” [1]. This claim is because of the assumption that therapeutics is a science which has developed after homoeopathy. Homoeopathy deals with the nature and conditions of a disease and medicine is selected based on the law of similimum. With the development of IT field and also the increase in use of computers in all other fields, it has led to postural deformities like cervical spondylosis, the developing countries like India face a major problem of health management among citizens along with its economic burden.

It is mainly caused due to wear and tear of the cartilages and bones in the cervical spine in neck. Chronic cervical degeneration is the most common cause of progressive spinal cord and nerve root compression. Spondylotic changes can result in stenosis of the spinal canal, lateral recess, and foramina. Spinal canal stenosis can lead to myelopathy, whereas the latter two can lead to radiculopathy [4]. One or more of the cervical nerve roots may be compressed, stretched, or angulated; and myelopathy may also develop as a result of insufficiency, or recurrent minor trauma to the cord. The C5 and C6 nerve roots are the most commonly involved, and examination usually reveals weakness of muscles supplied by these roots (e.g.: deltoid, supraspinatus and infraspinatus, biceps, brachioradialis), pain or sensory loss about the shoulder and outer border of the arm and forearm, and depressed biceps and brachioradialis reflexes [5].

While it largely occurs due to age factors, it can also be caused by any other factors such as irregular lifestyle, wrong postures, sedentary jobs, lack of exercise, stress, disk herniation, dehydrated spinal disks, bone spurs, ligament stiffness etc. [6], neck injuries, activities that put extra strain on your neck (heavy lifting, poor posture, repetitive movements, etc.), family history of the condition, smoking, being inactive and overweight, etc., [7]. Hence, cervical spondylosis is considered to be one among the life style disorder. Life style diseases are those whose occurrence is primarily based on daily habits of people and are a result of an inappropriate relationship with their environment [8]. Cervical spondylosis commonly affects those doing prolonged work with neck in a flexed position [9]. It may be precipitated by stress, anxiety, tension or depression [10].

As per the cross-sectional study of the cervical spondylosis patients, who attended the different Out patients and Rural centers of Sarada Krishna Homoeopathic Medical College & Hospital during 2014-2016, it came to my notice that cervical spondylosis is quite prevalent among young and middle age group and it is more common in females.

Degeneration of intervertebral discs and secondary osteoarthritis (cervical spondylosis) is often asymptomatic, but it may be associated with neurological dysfunction [11]. Clinically, several syndromes, both overlapping and distinct are seen. These include neck and shoulder pain, sub occipital pain, radicular symptoms and cervical spondolytic myelopathy (CSM), etc. [12]. The pain can be severe in some cases. Headaches may also occur, which usually start at the back of the head, just above the neck, and travel over the top to the forehead. Pain usually comes and goes, with flare-ups followed by symptom-free periods and around 1 in 10 people develop long-lasting (chronic) pain [13].

Medical treatments for cervical spondylosis include neck immobilization, pharmacologic treatments, lifestyle modifications, and physical modalities (e.g., traction, manipulation, exercises). No carefully controlled trials have compared these modalities; therefore, these therapies are often initiated based on a clinician's preference or specialty [2].

The normal practice in the Allopathic system is to treat neck pain with the usual painkillers, Non-Steroidal Anti-Inflammatory Drugs (NSAIDs) etc. In cases where patients feel vertigo or dizziness, some medicines are prescribed to contain the vertigo that is often present with the pain. Traction is often provided as another short-term measure. Wearing a collar is often recommended by doctors. Some patients get short term relief from restricting movement by the use of a collar. While this may be of some help in the short term, it has a detrimental effect in the long run. Restricting the use of neck muscles for a long period tends to reduce the strength of the muscles and it results in atrophy of the muscles. This is counterproductive as there is a need of stronger muscles to support the neck and head. Atrophied muscles become weak and are unable to provide the requisite support to the neck and the head. This in itself starts causing pain. Therefore, the use of collar should be minimal and done only when there is acute pain [14].

Surgery is advised for cervical radiculopathy in patients who have intractable pain, progressive symptoms or weakness that fail to improve by conservative measures. Surgical procedures may arrest the progression of disability but may not result in neurological improvement and may precipitate acute neurological conditions [14].

Cervical spondylosis is an irreversible damage and the conventional method of treatment used for pain relief has more side effects than giving relief to the patient. This awareness had made the patients turn towards the alternative systems of medicine and Homoeopathy tops the list.

Nux vomica is a medicine prepared from the seeds of the strychnos Nux vomica tree also known as poison nut or vomiting nut or Kuchila. The tree belongs to the Loganiaceae family. The main alkaloid in the seeds are strychnine and brucine [15] Igasurine (yet in doubt). The main acid is Igasuric acid, while the glucoside is named Loganin. These are colorless bodies and the alkaloids being very bitter, and energetically poisonous. Brucine is similar to strychnine, but acting with less violence and more slowly [16]. Nux Vomica is a frequently indicated remedy for neuralgia especially cervico-brachial neuralgia [17].

The poison nut tree has a crooked trunk and irregular, awkward-looking branches. Its flowers bloom in the cold season and have a disagreeable odor, characteristics contrary to most flowers which bloom in the warm season and have a pleasant odor. These contrary features are characteristics of people who need Nux vomica as well. They are chilly, both physically and psychologically. They are disagreeable, irritable, and quarrelsome. The poison nut tree’s wood is closing grained and hard. The Nux vomica people are similarly coarse, close minded, and hard-headed.

Dr. Boerick says “Nux Vomica is preeminently the remedy for many of the conditions incident to modern life” [17]. Cervical spondylosis, being one among the lifestyle disorder with neuralgic pain can be well managed wit Nux vomica when prescribed homeopathically. Thus, Nux vomica can serve as an effective medicine in managing the pain of patients with cervical spondylosis and also prevent further degeneration of the cervical spine and thus improving the health of the patient.

This study would bring evidence-based research in the pain management of cervical spondylosis with Nux vomica clinically, so that the modern generation can stay away from the conventional medications and its side effects.

This study has focused on the pain management of diagnosed cases of cervical spondylosis with Nux vomica prescription and its effectiveness would be analyzed.

Sampling: Simple Random sampling. 30 cases of cervical spondylosis with pain attending OPD, IPD and Peripheral centers of Sarada Krishna Homoeopathic Medical Collegiate Hospital were taken for this study. Diagnosis has been made based on clinical presentation and X -ray findings. Nux vomica has been prescribed on the patients, if the constitutional score indicated the remedy and the subjects were observed for changes in pain. VAS is used as a pain rating scale to record the intensity of pain before and after clinical management (Figure 1). 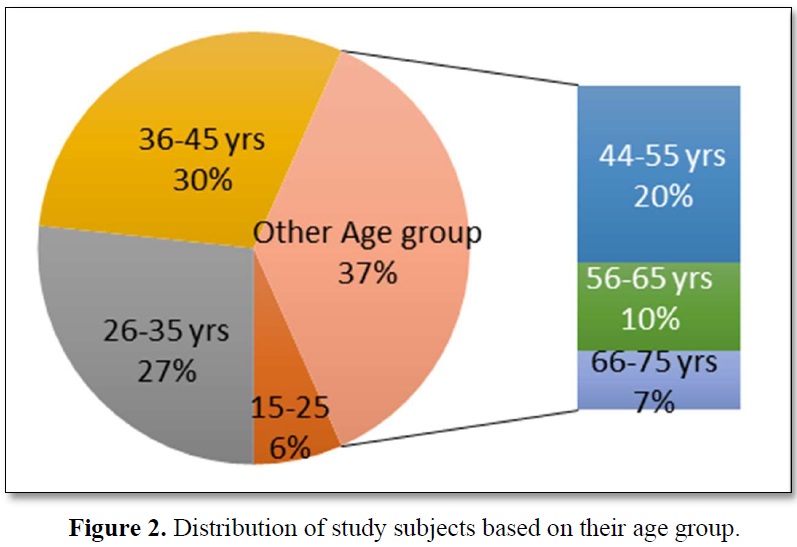 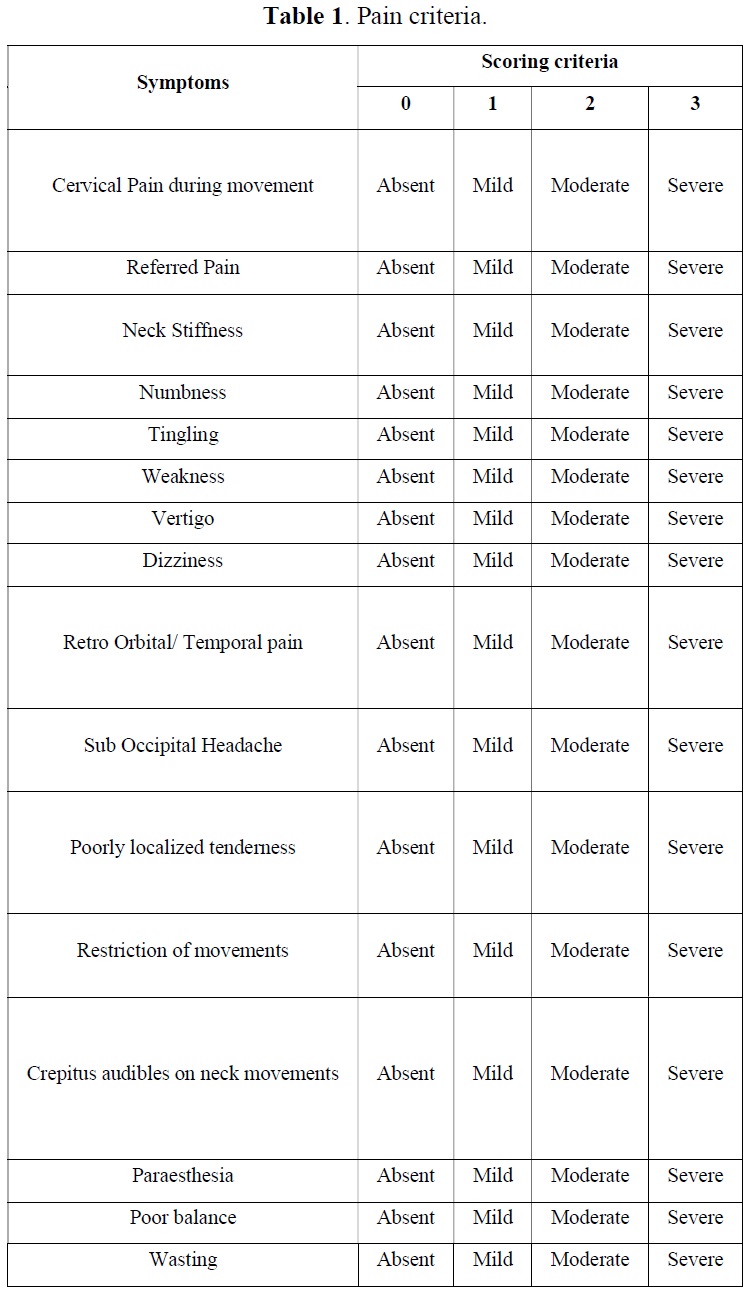 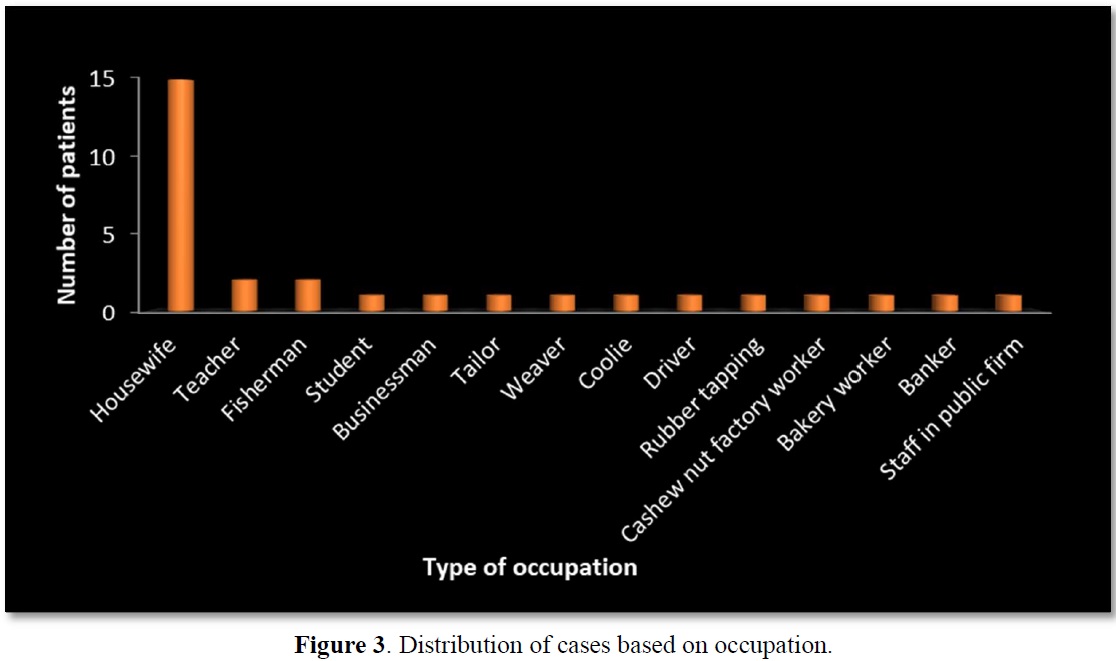 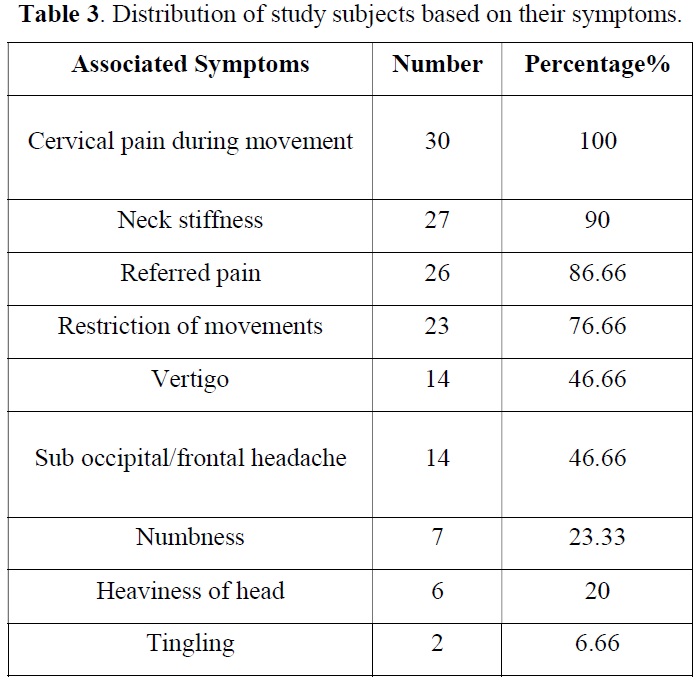 Among the 30 cases, 23 cases (76.66%) were females and 7 (23.33%) were males. Generally, it is found that males are prone to get the disease than females. According to the study by Irvine et al., 1965, prevalence in males was 13% by third decade and 100% by the age of 70 years. In females, prevalence in females was 5% in fourth decade and 96% above 70 years [12]. But in this study females are more affected with cervical spondylosis. Females are more affected due to their improper lifestyle.

Occupation has a key role in the onset of cervical spondylosis. In this study Housewives (50%) were the most affected. Mild injuries during household work, when left untreated pave way to degenerative change in the spine leading to cervical spondylosis. Repeated stress, hard physical labour, lifting weight, and reduced mobility of cervical spine forms the other contributing factors. These factors are confirmed by the incidence of disease prevailing in other occupations like Fishermen 6.66% (2 cases), Teacher 6.66% (2 cases), and 3.33% (1 case) each of student, tailor, business, weaver, coolie, driver, rubber tapping, cashew nut factory worker, staff in public firm. But the study published by Hagberg and Wegman in 1987 showed that “heavy workers” had significantly higher rates of cervical spondylosis.

According to the study, all cases presented with cervical pain aggravated by movement. It was followed by neck stiffness in 27 cases (90%), referred pain in 26 cases (86.66%), vertigo in 14 cases (46.66%), Sub occipital/Frontal headache in 14 cases (46.66%), numbness in 7 cases (23.33%), tingling and weakness in 2 cases (6.66%) each. Pain is the first and most common symptom which gives the patient a sign of his trouble. Most of the patients who took treatment never opted for homoeopathy in initial stages of disease as revealed by the symptoms, so there is a need to spread awareness about the potential of homoeopathy in treating such cases.

Out of 30 cases, all cases showed marked improvement after treatment with Nux vomica.