Copyrights: ©2022 Sultana MT, Dhar JR, Kakan FB & Mahmud S. This is an open-access article distributed under the terms of the Creative Commons Attribution License, which permits unrestricted use, distribution, and reproduction in any medium, provided the original author and source are credited.

Background: Fetal growth restriction is one of the common complications in pregnancy. It is responsible for various adverse perinatal outcomes. Modification of risk factors that are frequently associated with FGR can be done for better prevention of FGR and improvement of perinatal outcome.

Methods: A retrospective hospital record based observational study was done in Maternal Fetal Medicine unit of Dhaka Medical College Hospital, Bangladesh on the admitted patients of 2020. All data was analyzed by SPSS and risk factors for FGR were discussed according to weightage.

Conclusion: There are very little treatment options for patients with FGR so modification of risk factor is the key to improve perinatal outcome.

Fetal growth restriction (FGR) is a common complication of pregnancy leading to multiple adverse perinatal outcomes [1]. FGR occurs in up to 10% of pregnancies and is a leading cause of infant morbidity and mortality [2]. In high-risk cases, prevalence of FGR is up to 25% [1]. At all gestational ages, the fetus weighing below the 10th percentile is currently considered as FGR [3]. The stillbirth rate is approximately 1.5% in FGR, which is twice the rate in fetuses with normal growth. With fetal weights below the fifth percentile, the stillbirth rate can be as high as 2.5% [4,5]. Perinatal outcomes are largely dependent on the severity of FGR, with the worst outcomes noted in fetuses with estimated fetal weights (EFWs) at less than the third percentile or in association with fetal Doppler abnormalities. Besides perinatal mortality FGR babies have an increased risk of acidosis at birth, low 5 min APGAR score, high rate of NICU admission, complications of prematurity and birth adaptation [6]. In addition to its significant perinatal impact, FGR also has an impact on long-term health outcomes. It has been associated with metabolic programming that increases the risk for future development of metabolic syndrome and consequent cardiovascular and endocrine diseases [7,8]. It also can contribute to cardiac remodeling, leading to cardiovascular dysfunction that can persist into childhood and adolescence [9,10]. In addition, studies have shown an association between FGR and long-term neurologic impairment, with rates of cognitive and learning disabilities as high as 20% - 40% by school age [11].

FGR remains a complex obstetrical problem with limited treatment options. Modification of maternal risk factors is a better way to reduce the occurrence of FGR and subsequent complications. Though the risk factors are same all around the globe, their weightage is not even in all socio-demographic profiles. For addressing the problem of FGR, one has to identify its underlying risk factors and the way of its modification before and during pregnancy.

For assessing the current situation this study was conducted to find out the weightage of risk factors among Bangladeshi women with FGR.

A retrospective hospital record based observational study was done in the Maternal-Fetal medicine (MFM) unit of Obs and Gynae department, Dhaka Medical College Hospital, Bangladesh. After taking permission from hospital authority and Obgyn department, the patient's records from January to December 2020 were retrieved. Permission from Ethical review board was taken for publishing the data (Ref. Memo No. ERC – DMC/ECC/2021/ 422). From records of all admitted patients of MFM unit, the women who had FGR fetus were sorted out. FGR was defined by estimated birth weight less than 10th percentile, for the particular gestational age with or without abnormal Doppler finding. Patient's anthropometric data, previous medical status, previous obstetric outcome and current pregnancy complications were put on SPSS (version 16). Analysis was done by using frequency and percentage for categorical data and mean±SD for quantitative variables. Data was presented as charts and diagrams for better understanding. 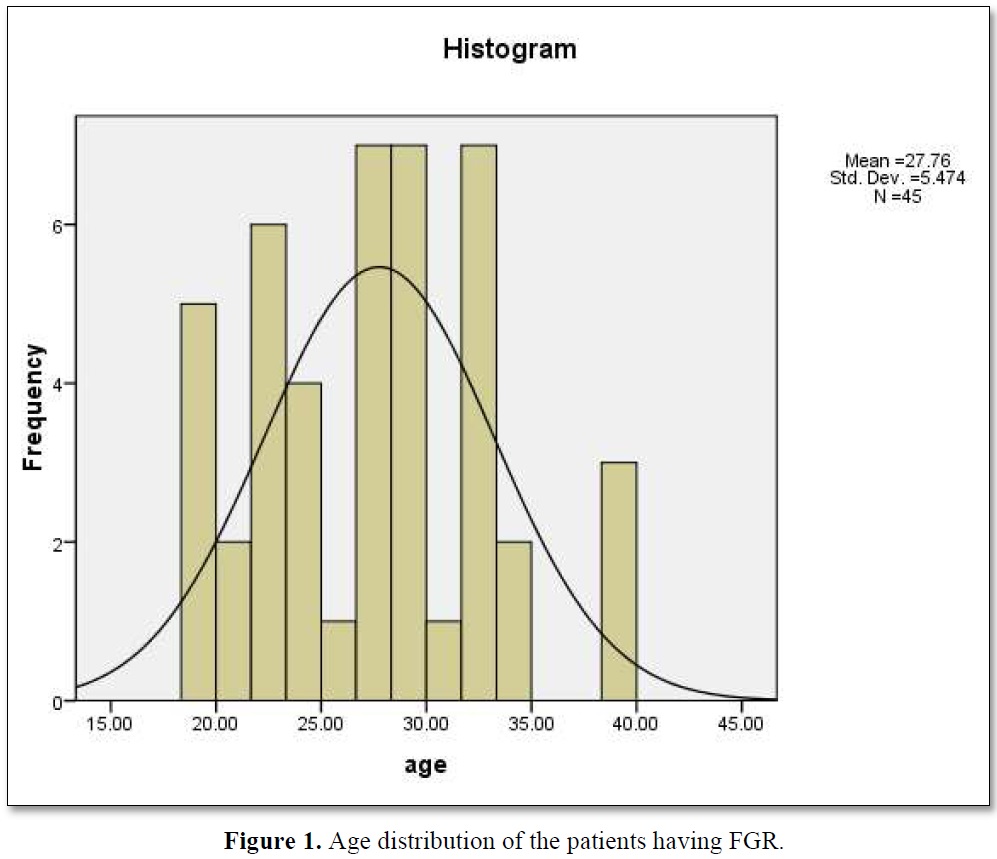 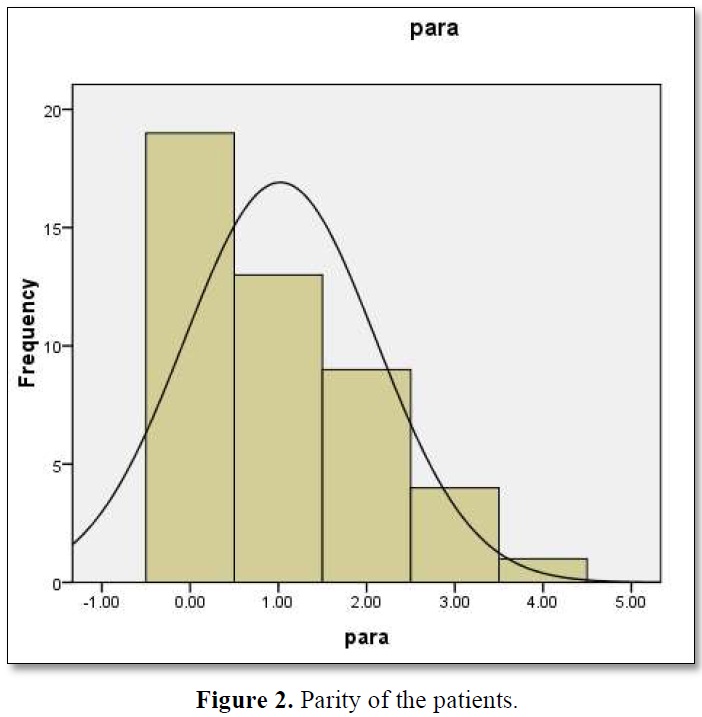 The associated preexisting medical disorder was found in 37.78% of patients. The individual disease frequency is shown in Table 1. 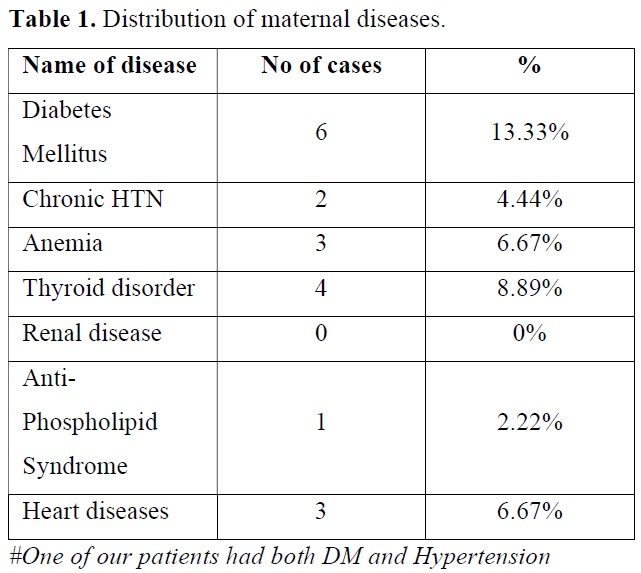 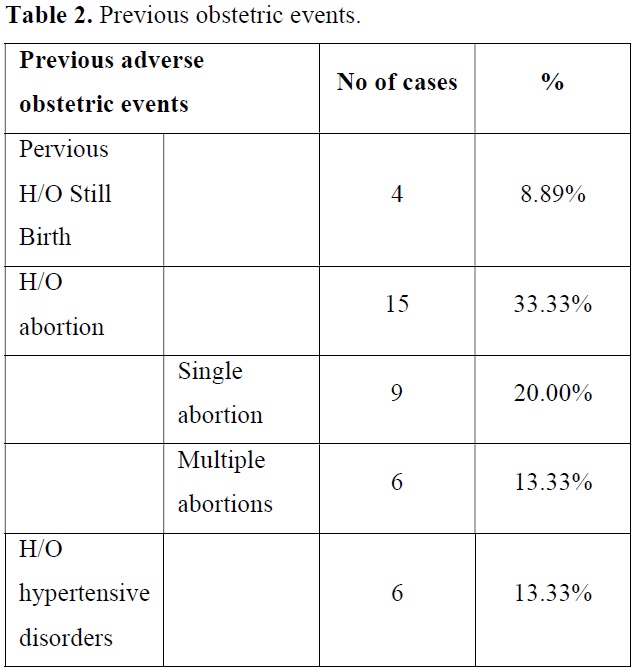 In previous obstetric history 33.33% of patient had H/O abortion and 8.89% had H/O previous still birth. Preeclampsia was present in 13.33% of patients in their previous pregnancies (Table 2).

Complication of current pregnancy with FGR is shown in Table 3.

In this study, 53.33% of patients had hypertensive disorders in current pregnancy. Among them 40.00% had preeclampsia with severe features, 4.44% had preeclampsis and 2.22% had eclampsia. One patient had H/O COVID-19 infection in third trimester and she also had Preeclampsia with severe features. PROM was present in 8.89%. 35.56% of patients had abnormal fluid volume not due to PROM. Anomaly fetus was found in 8.89% of cases.

Dhaka Medical College Hospital (DMCH) is the largest hospital of Bangladesh and it is a tertiary care center which is fully supported by government. High risk pregnancy patients came here from all over the country and got admitted in Maternal Fetal medicine unit of Department of Obs and Gynae, for better management. After evaluation of maternal and fetal condition we found the mean age of our patients with FGR was 27±5.47 years, among them 60% of the patients were within the age group of 20-30 years. This result is similar with the study in Egypt, which shows that mean age of patients with FGR was 28.6 ± 2.7 years [13]. In India, Subramanian and coworkers found 53% of patients with FGR were within age group of 20-24 years [1]. This may be due to low age of marriage in India.

In this study 53.33% of patients had hypertensive disorders in current pregnancy which carry the single most weightage for development of FGR. 35.56% of our patients had abnormal fluid volume, most of which was oligohydramnios. This oligohydramnios was most likely the effect of FGR rather than cause. Anomaly fetus was found in 8.89% of cases, in whom the cause of FGR is intrinsic for these fetuses.

From above discussion we can find that FGR in Bangladeshi as well as south Asian population is mostly developed on the ground of Hypertensive, Diabetic, Cardiac and anemic mothers. Though the other chronic diseases also have contribution along with some fetal factors, proper pre-conception checkup and modification of common heavy weight risk factors can reduce the prevalence of FGR.

There are very little treatment options for patients with FGR. Identification of major risk factors in pre conception period and modification along with proper antenatal care is the key to improve perinatal outcome.

To conduct large study in a more precise way so that the odds for each risk factor can be calculated.

I would like to express my gratitude and acknowledge the following persons for their active participation and inspiration through-out this research work:

There is no conflict of interest in this study.