Copyrights: ©2022 Kahrarian Z, Mojarrab M & Shahbazi Y. This is an open-access article distributed under the terms of the Creative Commons Attribution License, which permits unrestricted use, distribution, and reproduction in any medium, provided the original author and source are credited.

Materials and Methods: This study data collection by articles in internal databases such as, Irandoc, SID and external databases including Science Direct, Scopus, PubMed, Elsevier, Google Scholar, Directory of Open Access Be it.

Results: Chemical analysis of Artemisia dracunculus essential oil including volatile oils, quarines, flavonoids and phenolic carbonic acids that have specific antimicrobial effects. So, the essential oils of this plant can be used as a food preservative and in the trap of infective diseases.

Conclusion: Comparison of the analysis of the essential oil ingredients of this plant related to the geographical diversity of the region and different cultivation conditions. Iran is one of the most regions in world in that grows these plants, detection, extensive and optimization of oil essential of these plants can be important role in treatment diseases, however, this study was not performed to assay treatment of the essential oil of Artemisia dracunculus.

Foodborne diseases are a global challenge. Every year, millions of people die from eating unhealthy foods [1]. Today, due to the increasing use of chemical preservatives, natural additives have received very attention [2]. Using of chemical drugs to treatment of infectious diseases has led to the emergence of resistant microbial strains [3]. Therefore, in order to control the spread of multidrug-resistant pathogens (MDRs), the use of new antioxidant and antimicrobial agents, including plant extracts, as a source of new antimicrobials can be effective [4]. Plant essential oils often contain polypranoids, aromatic compounds and quince terpenes, which due to the presence of phenolic groups in their structure can have antimicrobial effects on bacteria [5].

Artemisia is the largest genus of the Asteraceae family, consisting of between 350 and 500 species [6]. Artemisia species are often found in Asia, Europe and North America [7]. Most of these species are found in Asia [6]. There are 35 species of this genus in Iran [8]. Dracunculus is a small, perennial, woody plant with a stem 40 to 150 cm high. Aerial stems arise from thick, horizontal rhizomes that grow in clusters and separately. Basal leaf with one to three lobes. They have clustered inflorescences with numerous flowers [9].

Artemisia species has been used in traditional Iranian medicine as an antiseptic, antibacterial, gastrointestinal and gastric [10].

A.dracunculus essential oil. The active secondary metabolites including: coumarin, flavonoids and phenolic acids [11]. Monoterpenes, sescopy terpenes, Lactones, flavonoids, quarines, and sterols, polystyrene have been extracted from the chemical compounds of Artemisia species essential oils [12]. Antimicrobial mechanism the structure and function of the cell membrane [13]. Cineol is the most abundant compound of artemisia essential oil that is widely used in the preparation of medicinal substances [14]. Tarkhon with the scientific name of Artemisia dracunculus belongs to the large family Asteraceae in (Artemisia) Iran [15]. Tarkhon has long been used as a spice and flavoring in food in Iran [16].

The composition of tarragon essential oil depends on the ecological diversity of the region. Occupied has a plant. In addition, the cytotype of the sample has an effect on determining the properties of the essential oil [17]. Methyl chavicol, one of the main components of the plant base oil, has genotoxic properties [18].

In previous Survey, the antimicrobial effect of A. dracunculus essential oil on gram positive and gram-negative bacteria have been proven in studies [19]. The main compounds for 96.36% of tarragon essential oil are shown in (Table 1) [20]. 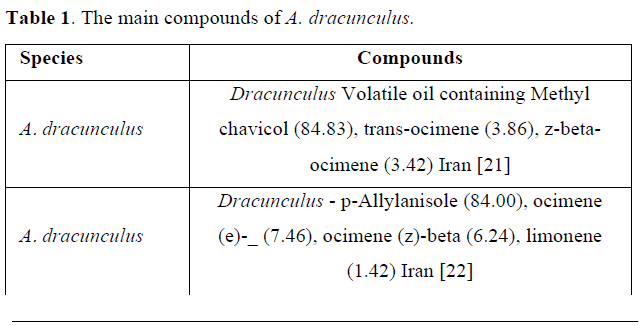 Antibacterial activity: In the previous studies, antibacterial properties of A. dracunculus have been reported against a number of gram positive and gram-negative bacteria (Table 2).

Results showed that the MIC of gram-positive bacteria is more than gram negative. This comparison is shown in Table 3 [23].

In addition, Cordalli et al. (2005) reported the antibacterial potential of A. dracunculus essential oil against syringae glycinea, Brevibacteriumcasei, Proteus vulgaris, etc. [24]. In a study conducted Antibacterial activity of A. dracunculus extract has been reported against Gram negative bacteria of Helicobacter pylori [25,26].

Hamidi [29] in a study examined the antibacterial activity of tarragon against Listeria monocytogenes in fresh white cheese alone and in combination with monolurin. Combination of monolaverine with Eos had additive effect and inhibitory concentration index (0.66). all Eos, which were added alone to cheese, showed antibacterial effect, which is associated with an increase in their concentration. Addition of EO tarragon with monolurin provided the highest inhibition compared to Eos alone. The results of this study showed that the use of a combination of these substances at concentrations below 400 ppm could be used to control the growth of L. monocytogenes in food [32]. Bonyadian [30] conducted a study to determine the effect of tarragon essential oil on B. cereus, S. typhimurium, L. monocytogenes and Y. enterocolitica. The results showed that tarragon essential oil in this study has significant antimicrobial activity against the tested bacteria. Also, second stage showed that plant essential oil has an effect on bacterial growth not only in the delay stage but also in the logarithmic stage [33].

Behbahani [23], in a study, the diameter of the inhibitory zone of Listeria inocua, Staphylococcus epidermidis, Salmonella typhi and Enterobacter aerugin obtained 11.2, 14.2, 9.80 and 8.8-mm MBC / MIC, respectively. Staphylococcus epidermidis and Listeria inocova and Salmonella typhi and Enterobacter aeruginosa were identified in the Table 5 below. According to the results of this study, tarragon essential oil has antibacterial properties that are less than the antibacterial effect of vancomycin and gentamicin antibiotics [35].

Therefore, using the essential oil of A. dracunculus Agents’ from deasaies fungi [36].

Antiparasitic activity: Cutaneous leishmaniasis is one of the most important fungal diseases of the skin with various clinical manifestations with a prevalence of 0.7-1.3 million cases per healthy, this disease is often reported from six countries, including Iran. Mirzaei [35], it was shown that tarragon extract is anti-Leishmania. Tarragon essential oil was obtained in 962.03, 3688.368 and 55.55 g / ml in 24, 48 and 72 h, respectively. There was a significant relationship between concentration and time (P <0.05) [37].

Artemisinin based combination methods are currently considered as a treatment for malaria Plasmodium falciparum anti-leishmaniasis effect. The essential oil of Artemisia species, due to the presence of a cesquiterpene lactone endoperoxide, has provided a new class of very effective analgesics, and the antiparasitic and antimicrobial effects of this species have been proven [38].

Nasrabadi et al. (2014) in a study of the chemical composition of Artemisia essential oil and the antibacterial effect of essential oil and aqueous and alcoholic extracts (ethanol and methanol) on Listeria monocytogenes and Bacillus cereus, important. The minimum growth inhibitory concentration of MIC for essential oil in the methanolic extract of this plant with a concentration of 3000 ppm in Staphylococcus aureus, Escherichia coli O157: H, Listeria monocytogenes and Bacillus was 10, 10, 8, 4 / ml / ml, respectively. They showed that the essential oil and methanolic extract of the plant have a greater inhibitory effect on the above bacteria and can be used as a natural preservative in food [39].

Ashrafpour [38], ovia Disc diffusion method and well method were used to measure the diameter of the growth inhibition zone obtained from each extract and their different concentrations as an indicator of antimicrobial activity. The antimicrobial activity of the extracts against Balenk samples as well as antibiotics commonly used in the treatment of microbial infections was compared. The results showed that all three aqueous, ethanolic and methanolic extracts of essential oil were able to produce significant antibacterial properties in comparison with Balenck and antibiotic samples. Aqueous extract at a concentration of 100 mg / ml equivalent to 30% of the antibacterial effect of ciprofloxacin on Escherichia coli and methanolic extract with the highest antimicrobial activity equal to 71% vancomycin showed an inhibitory effect on the growth of Enterococcus faecalis. Aqueous extract had the least inhibitory effect on Escherichia coli and Enterococcus faecalis, but the inhibitory effects of this extract were significant compared to Balenck sample [40].

In previous studies, confirming the existence of significant chemical differences between the essential oils of different species of the genus Artemisia, most of the antimicrobial properties in the studied essential oils are due to monoterpene compounds. All Artemisia species are rich in terpenoids. The compounds in Artemisia essential oil are due to ecological differences such as latitude and longitude, altitude, temperature, humidity, climate and soil; metabolic pathways and biosynthesis affect the active ingredients in these plants and as a result, diverse secondary metabolites are biosynthesized under different environmental conditions [41].

Currently, the increase in multidrug-resistant pathogens in the world is a major problem. Escherichia coli, Enterobacter, Klebsiella, Proteus, Salmonella, etc., are usually resistant to more than two groups of antibiotics. As a result, there is a greater need to discover new natural remedies [42].

Herbal remedies are used worldwide in the traditional treatment of various diseases, but the effectiveness of such herbal remedies has rarely been proven in controlled clinical trials. In this study, the essential oils tested in Artemisia genus have been confirmed in Iran and in other countries. For this purpose, due to the nativeness of this plant, research in this field, including the analysis of the essential oil composition of different parts. The plant and its effects on microbial agents were investigated. Due to the presence of flavonoids and volatile oils in the essential oil of this plant have potential antibacterial, fungal and viral activity.

Stragol and methylogenol are the two main constituents of A. dracunculus essential oil. In addition, aqueous tarragon extract was found to be free of both estrageol and methylogenol and was reported to be safer than ethanolic extracts [20]. Significantly lower than French tarragon was 74.46% (<10% vs. 75%, respectively).

Artemisinin-based combination methods are currently considered as a treatment for malaria disease Plasmodium falciparum anti-leishmaniasis effect. The antimicrobial and antimicrobial effects of this species have also been proven. The antimicrobial effect of A. dracunculus essential oil on gram-positive and gram-negative bacteria has been proven in studies [19]. Effect of Artemisia species essential oils on gram-positive and gram-negative bacteria considering that they have been studied in studies, it seems that the MIC of essential oils on gram-positive bacteria is higher than gram-negative. This comparison is presented in Table 4 [23]. Despite the long tradition of using some Artemisia species to treat infectious diseases, little medicinal work has been done so far to validate their traditional uses. Further research is needed to analyze and identify the essential oils of different parts of these plants.

Analysis of the essential oil composition of these plants depends on the geographical diversity of the region and different cultivation conditions. Iran is one of the richest regions of the world in terms of number and variety of these plants, identification, development and optimization of the extract of these plants can play an important role in the health of society, economy and production. This study may focus on the unknown potentials of Artemisia species in Iran. Despite the long tradition of using some species of Artemisia to treat infectious diseases, so far little pharmacological work has been done to validate their traditional uses.