Copyrights: ©2021 Abarnadevika A, Vishali M & Ariharasivakumar G. This is an open-access article distributed under the terms of the Creative Commons Attribution License, which permits unrestricted use, distribution, and reproduction in any medium, provided the original author and source are credited.

Diabetes mellitus is a group of metabolic diseases characterized by chronic hyperglycemia resulting from defects in insulin secretion, insulin action, or both. The chronic hyperglycemia of diabetes is associated with long-term damage, dysfunction, and failure of different organs, especially the eyes, kidneys, nerves, heart, and blood vessels. The objective of present investigation is to investigate hypoglycemic activity of Eleocarpus tectorius extract against Streptozotocin nicotinamide induced type II diabetic rats. Diabetes was induced by a single intraperitoneal injection of Streptozotocin 60mg/kg 15 min after the administration of Nicotinamide 120 mg/kg (i.p) followed by (i.p). The diabetic rats were treated with HALEET (200 and 400 mg/kg, p.o) for 21 days. Fasting blood glucose level and body weight were monitored every 7 days during the treatment. At the end of the study fasting blood glucose level, hemoglobin and HbA1c were analyzed in whole blood. Total cholesterol, triglycerides, SGOT, and SGPT were estimated in serum, and in vivo antioxidant markers (GSH, CAT and LPO) were estimated in liver homogenate. Histopathology’s of pancreas were carried out to assess antidiabetic effect of HALEET. After treatment with HALEET fasting blood glucose, HbA1c levels, SGOT, SGPT and LPO were significantly decreased in diabetic rats. However, hemoglobin, CAT and GSH levels were significantly increased in HALEET treated diabetic rats. The histopathological studies of the pancreas in extract treated diabetic groups’ revealed regeneration of beta cells. The results indicated that significant hypoglycemic effect in Streptozotocin and nicotinamide induced Sprague Dawley rats.

Diabetes mellitus is a group of metabolic diseases characterized by chronic hyperglycemia resulting from defects in insulin secretion, insulin action, or both [1]. The chronic hyperglycemia of diabetes is associated with long-term damage, dysfunction, and failure of different organs, especially the eyes, kidneys, nerves, heart, and blood vessels [2].  Metabolic abnormalities in carbohydrates, lipids, and proteins result from the importance of insulin as an anabolic hormone. Low levels of insulin to achieve adequate response and/or insulin resistance of target tissues, mainly skeletal muscles, adipose tissue, and to a lesser extent, liver, at the level of insulin receptors, signal transduction system, and/or effectors enzymes or genes are responsible for these metabolic abnormalities [1]. The prevalence of DM is increasing at an alarming rate. As per the International Diabetes Federation 415 million people had been diagnosed with diabetes by 2015, and it is currently being estimated that nearly 642 million people will have diabetes by 2040.If diabetes mellitus left untreated, it can be life threatening and can greatly reduce quality of life [3].

Sprague Dawley rats aged 6months; weighing 180 ± 20 g were obtained Biogen-laboratory animal facility, Bangalore. The rats were housed in clean polypropylene cages having six rats per cage and maintained under temperature-controlled room (27 ± 2ºC) with a photoperiod of 12 h light and 12 h dark cycle. The rats were given standard pellets diet and water ad libitum throughout the experimental period.

The experiments were carried out in accordance with guidelines and protocol approved by the Institutional Animal Ethics Committee (Approval No:KMCRET/M.Pharm/11/2019-2020).

The animals were fasted overnight and diabetes was induced by a single intraperitoneal injection of a freshly prepared solution of streptozotocin (STZ) (60 mg/kg body weight) in 0.1 M cold citrate buffer (pH 4.5) 15 mins after followed by Nicotinamide (120mg/kg) in normal saline. The animals were considered as diabetic, if their blood glucose values were above 250 mg/dl on the third day after STZ injection.

Eleocarpus tectorius treatment was given to the diabetic rats for 21 days [4].

Collection and Authentication of Plant

The leaves of Eleocarpus tectorius were collected from the surrounding areas of The Nilgiris, Tamilnadu, India during the month of January and authenticated by Botanical survey of India (BSI) southern circle, Coimbatore, Tamilnadu. The authentication certificate number is No.BSI/SRC/5/23/2019/Tech./3238.

Extraction of the Plant Material

The coarsely powdered plant material of Eleocarpus tectorius leaves is initially extracted by placing the powder in a stoppered container with the solvent (petroleum ether) and allowed to stand at room temperature for a different period of time (6h, 12h, 24h, 48h) with frequent agitation until the soluble matter has dissolved and then the mixture is strained, the marc (the damp solid material) is pressed, and the combined liquids are clarified by filtration or decantation after standing. The marc of E. tectorius was again soaked in hydro-alcohol for 15days followed by filtration and evaporation under reduced pressure by using heating mantle at 45°C and stored in air tight glass container at 4o C for biological studies [5].

The rats were divided into five groups, six rats in each group and treated as follows:

The data obtained from the result was analyzed by using two ways ANOVA test using graph pad prism software. All data were expressed as the mean SEM of their parameter.

The concentration of reduced GSH was measured at 412nm [6]. The extent of lipid peroxidation was estimated as the concentration of thiobarbituric acid reactive product MDA by using the method of Ohkawa [7]. All the enzyme activities were expressed per mg protein and the tissue protein was estimated according to the method of Lowry method using bovine serum albumin (BSA) as a standard (Figure 2). 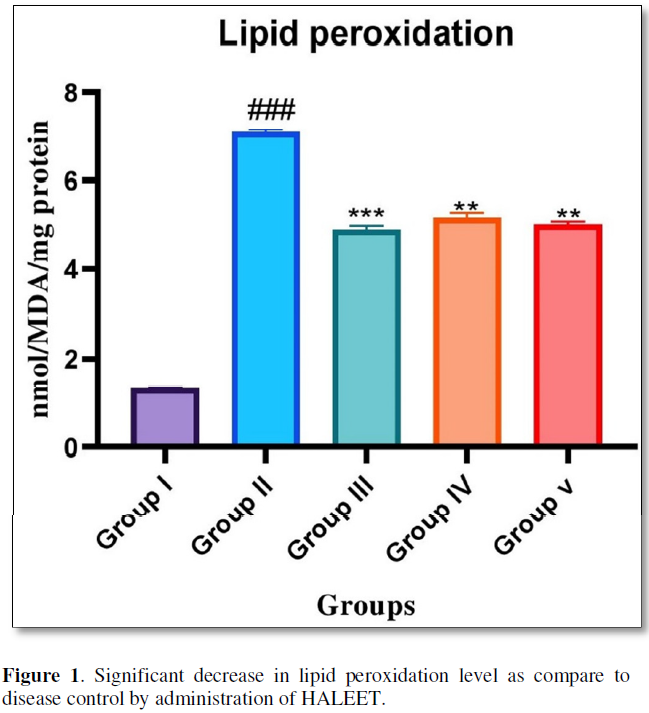 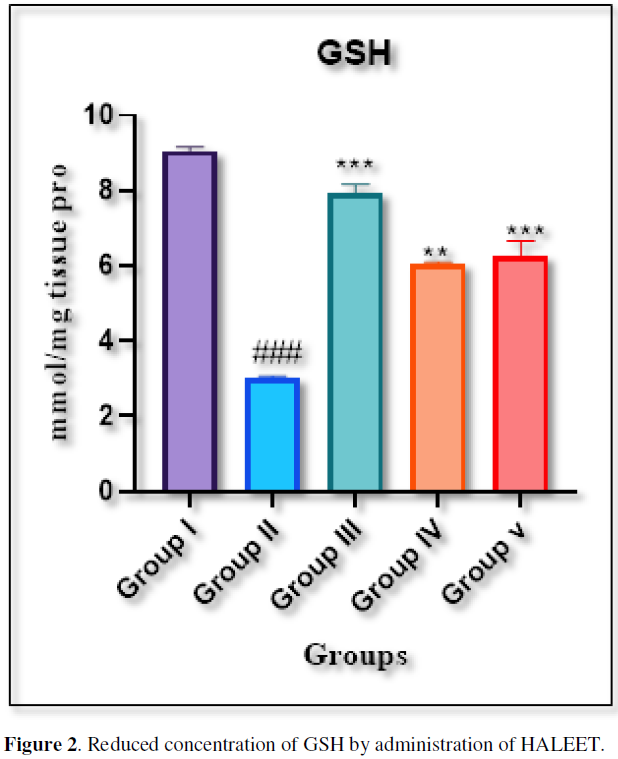 Diabetes mellitus is a worldwide problem, and type 2 diabetes is found to be more prevalent. Patients in this group range from those with insulin deficiency and insulin resistance to a predominantly secretory defect with some insulin resistance. The STZ-NIC induced diabetic rat has shown a marked increase in the serum glucose levels after 3rd day of induction period, indicating the hyperglycemia, when compared with controls. The increase in serum glucose levels were observed due to diabetogenic action of STZ-NIC in diabetic rats (Diabetic group).

Insulin resistance plays a major role in the pathogenesis of diabetic dyslipidemia which causes increased free fatty-acid release from insulin-resistant fat cells and promotes more triglycerides production [8]. Presence of hypertriglyceridemia and hypercholesterolemia and reduction of HDL are the most common lipid abnormalities that were reported in diabetic condition [9]. The present study results showed significant increases in serum TC and TG levels and reduction in serum HDL level in diabetic control rats. Administration of HALEET (200mg/kg, 400mg/kg dose) and glibenclamide (20mg/kg) decreased levels of TC, TG, LDL and VLDL as well as increased HDL levels in treatment group than diabetic control rats. Therefore, this action of HALEET will help to reduce macrovascular complications in diabetes (Figure 3a & 3b). 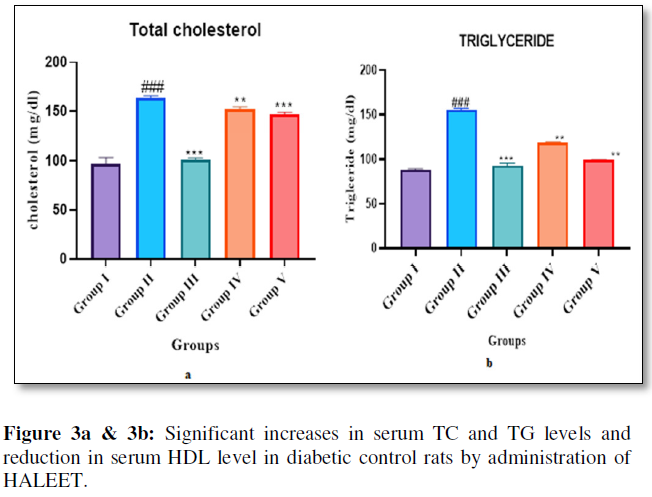 The glycosylated hemoglobin (HbA1C) is a major clinical marker in diabetes which helps to find the degree of protein glycation during diabetes [10]. In persistent hyperglycemic state, formation of HbA1c occurred by nonenzymatic reaction between glucose and free amino groups of hemoglobin. HbA1c level in diabetes helps to find long-term glycemic control, and it helps to predict the risk of the development or progression of diabetic complications. Published studies supported that reduction in HbA1c levels during the diabetes treatment considerably reduced microvascular complications [11]. There is a significant decrease in Hb and increase in HbA1C levels in STZ-NIC induced diabetic control rats. The treatment with HALEET (200mg/kg and 400mg/kg dose) showed reduction of HbA1c and improvement in Hb levels nearby equivalent to standard group, and it may be possibly due to blood glucose lowering effect of HALEET through reversal of insulin resistance or increasing insulin secretion by regeneration of pancreatic 𝛽-cells (Figure 4a & 4b). 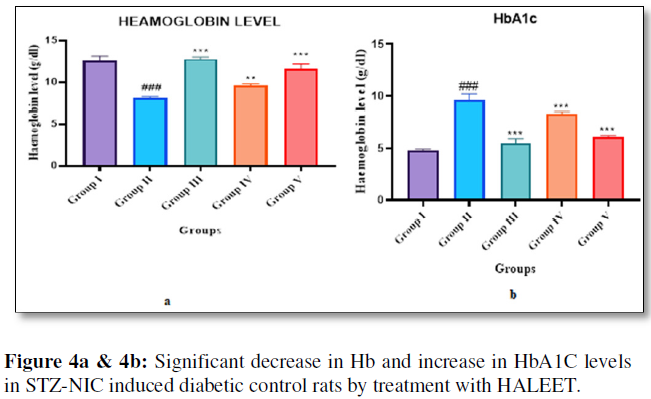 One of the key enzymes for carbohydrate metabolism in the small intestine are pancreatic 𝛼-amylase which converts consumed polysaccharides to monosaccharides. This enzyme action causes postprandial blood glucose level elevation due to absorption of formed glucose from polysaccharides in the small intestine. Drugs having an inhibitory action on both of these enzymes possess an ability to control of postprandial blood glucose level specifically in type 2 diabetic patients. Currently, available drugs in this category are acarbose and miglitol, which competitively inhibit above enzymes. But these drugs have common side effects such as flatulence and abdominal bloating [12]. New drugs or formulations which are devoid of the above side effects will improve the compliance in type 2 diabetic patients. The present study results clearly demonstrated that HALEET possesses potent pancreatic 𝛼-amylase inhibition which confirmed that in vivo antidiabetic action of HALEET may be due to inhibition of the above enzyme.

In type 2 diabetes, peripheral insulin resistance and impaired insulin secretion from pancreatic -cells are two important features Drug which diminishes insulin resistance will effectively control hyperglycemia, normalize lipid metabolism in type 2 diabetes, and hence it will prevent the diabetes-mediated cardiovascular complications [13]. The drugs like metformin and pioglitazone will ameliorate insulin resistance and control the hyperglycemia and abnormal lipid metabolism. This class of drugs has adverse effects such as lactic acidosis, gastrointestinal disturbance, liver toxicity, and cardiovascular risk [14]. Thus, drugs which improve insulin sensitivity without adverse effects were reported to be useful for the long-term treatment in type 2 diabetes. In the present study, Mechanism of glucose transport across the yeast cell membrane has been receiving attention as in vitro screening method for hypoglycemic effect of various compounds/ medicinal plants. The results of the yeast cell glucose uptake study revealed that HALEET increased glucose uptake in yeast cells at various glucose concentrations Plants and plant-derived products contain a wide range of phytochemicals, such as alkaloids, flavonoids, glycosides which are thought to have a hypoglycemic role. Preliminary phytochemical tests were confirming the alkaloids, flavonoids, glycosides, saponins, tannins, proteins and amino acids present in HALEET.

The increase in SGOT and SGPT are predictors of diabetes. Increased activities of SGOT and SGPT are a common sign of liver disease. In streptozotocin-nicotinamide induced type 2 diabetic, rats increase in serum SGOT and SGPT level may be due to the leakage of these enzymes from liver cytosol into blood stream as a result of the hepatotoxic effect of STZ [15]. Treatment with HALEET decreased the levels of SGOT and SGPT in diabetic animals, which indicates that the HALEET tends to prevent liver damage in diabetes by maintaining integrity of plasma membrane, thereby suppressing the leakage of enzymes through membrane (Figure 5a & 5b). 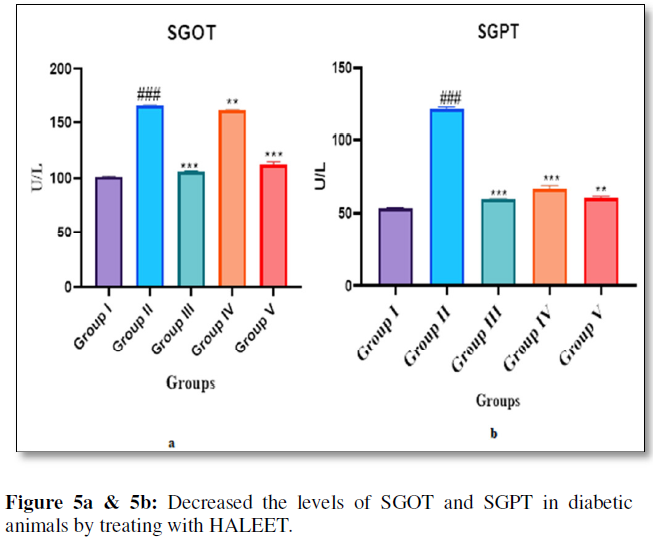 Lipid peroxide mediated tissue damage has been observed in the development of both Type 1 and Type 2 diabetes mellitus. Insulin secretion is impaired during diabetes and this may evoke lipid peroxidation in biological systems. Present study shows that administration of HALEET and glibenclamide inhibits production of liver peroxides. SOD and CAT are the two major scavenging enzymes that remove toxic free radicals in vivo and are thought to play important role in protecting the cell against the potentially deleterious effects of reactive oxygen species. Reduced activity of SOD and CAT may result in a number of deleterious effects due to the accumulation of superoxide radicals (O2-) and hydrogen peroxide [16]. Administration of HALEET and glibenclamide results in the activation of SOD and CAT to near normal levels in diabetic rats. The result of the SOD and CAT activity clearly shows that HALEET has free radical scavenging activity, which could exert a beneficial action against pathological alterations caused by the presence of O2- and OH- (Figure 6a & 6b). 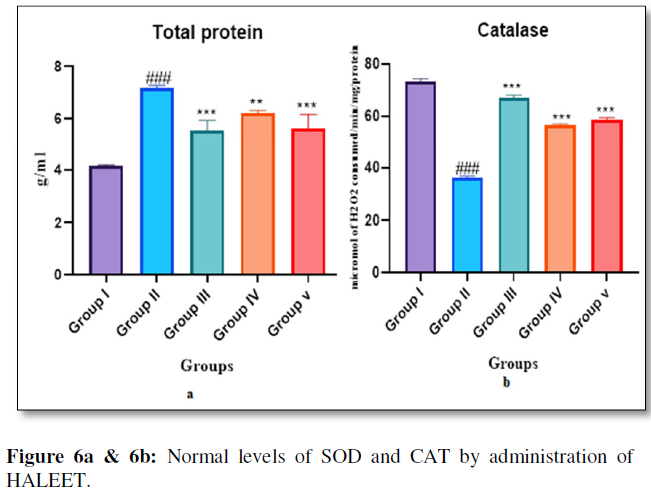 The present study confirms the hypoglycemic activity of Eleocarpus tectorius on Sprague Dawley rats. Thus, the study substantiates traditional claim of Eleocarpus tectorius as an anti- diabetic drug. However, further studies are needed to elucidate the mechanism(s) of action and to identify the active principle/s responsible for producing this activity.