A Review About Barleria Prionitis; A Rare Known Shrub with Potential Medicinal Properties

Copyrights: ©2021 Farrukh S. This is an open-access article distributed under the terms of the Creative Commons Attribution License, which permits unrestricted use, distribution, and reproduction in any medium, provided the original author and source are credited.

There are thousands of species which are known for their potential medicinal properties while many of them are still need to be discovered as a potential drug targets and their active drug molecules. B. prionitis is one of the rarely known shrubs which has wonderful medicinal properties whether its leaves, flowers, stem and whole plant. It is native to tropical East Africa and tropical and temperate Asia. The whole plant leaves, and roots are used for a variety of purposes in traditional Indian medicine. For example, the leaves are used to promote healing of wounds and to relieve joint pains and toothache. Because of its antiseptic properties, extracts of the plant are incorporated into herbal cosmetics and hair products to promote skin and scalp health. Preliminary phytochemical analysis of hydro-methanol of B. prionitis whole plant indicated the presence of glycosides, saponins, flavonoids, steroids and tannins. The antidiabetic activity of alcoholic extract of leaf and root of B. prionitis was evaluated by using alloxan monohydrate. B. prionitis leaves showed significant decrease in blood glucose level, glycosylated hemoglobulin and significant increase in serum insulin and liver glycogen level. B. prionitis root showed moderate but non-significant anti-diabetic activity in experimental animals.

From the time immortal plants always has been used as food and medicines. There are thousands of species which are known for their potential medicinal properties while many of them are still need to be discovered as a potential drug targets and their active drug molecules. India is not only known for its broad diverse culture and tradition but also known for its broad diversity of plant species because of diversified landscaping and varied climates.  During the last decade, use of traditional medicine has expanded globally and gained popularity. Because of awareness of deleterious effects of modern synthetic drugs, the plant-based drugs are getting much attention for use in herbal medicines, antioxidants and cosmetics. Natural products have a significant role in pharmaceutical industry as potential drug sources and bio active compounds [1]. 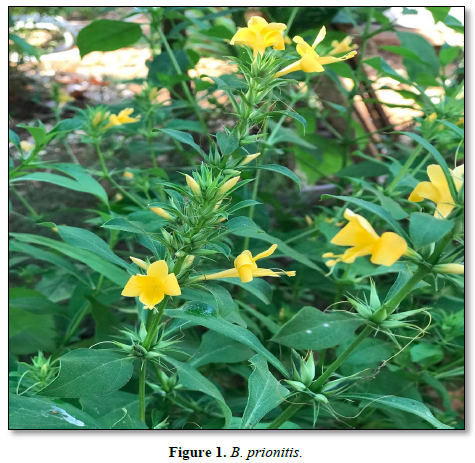 B. prionitis grows in a wide variety of soils, but it grows best in well-drained sandy soils. Within its naturalized range, for example in Puerto Rico, it grows in areas receiving from about 750-900 mm of mean annual precipitation [3]. B. prionitis is moderately intolerant of shade, growing in both full sunlight and under light forest canopies [6].

Porcupine Flower has numerous medicinal properties including treating fever, respiratory diseases, toothache, joint pains and a variety of other ailments; and it has several cosmetic uses. A mouthwash made from root tissue is used to relieve toothache and treat bleeding gums. The whole plant leaves, and roots are used for a variety of purposes in traditional Indian medicine. For example, the leaves are used to promote healing of wounds and to relieve joint pains and toothache. Because of its antiseptic properties, extracts of the plant are incorporated into herbal cosmetics and hair products to promote skin and scalp health. It used in Indonesia as a component in traditional medicines [7], parts of the plant are bitter, astringent in taste, and are regarded in Myanmar as highly beneficial for skin, blood and other diseases [8]. Often combined with sesame oil and fermented-rice washing-water, the whole plant, leaves (sometimes burnt to ash or crushed for juice), stems, branches, and roots are used together or separately. In Pakistan shrubs are grown as a hedge while its bitter quinine-like extract is used in traditional medicine to treat whooping cough and tuberculosis [9].

Author itself has undergone to Case studies at father’s own homeopathic clinic (Homeopathic practitioner), for treating Renal stones with the leaves of ‘B. Prionitis’ as ‘traditional medicine’ considering its amazing diuretic properties, more than 30 cases of patients undertaken for studies suffering from renal stones who were treated at different intervals. As the size of stone varied from patient to patient ranging from 10mm to 30mm. The patients were advised to take paste of three leaves orally, following with a glass of butter milk before going to bed for 3 days.

Observations were as follows: 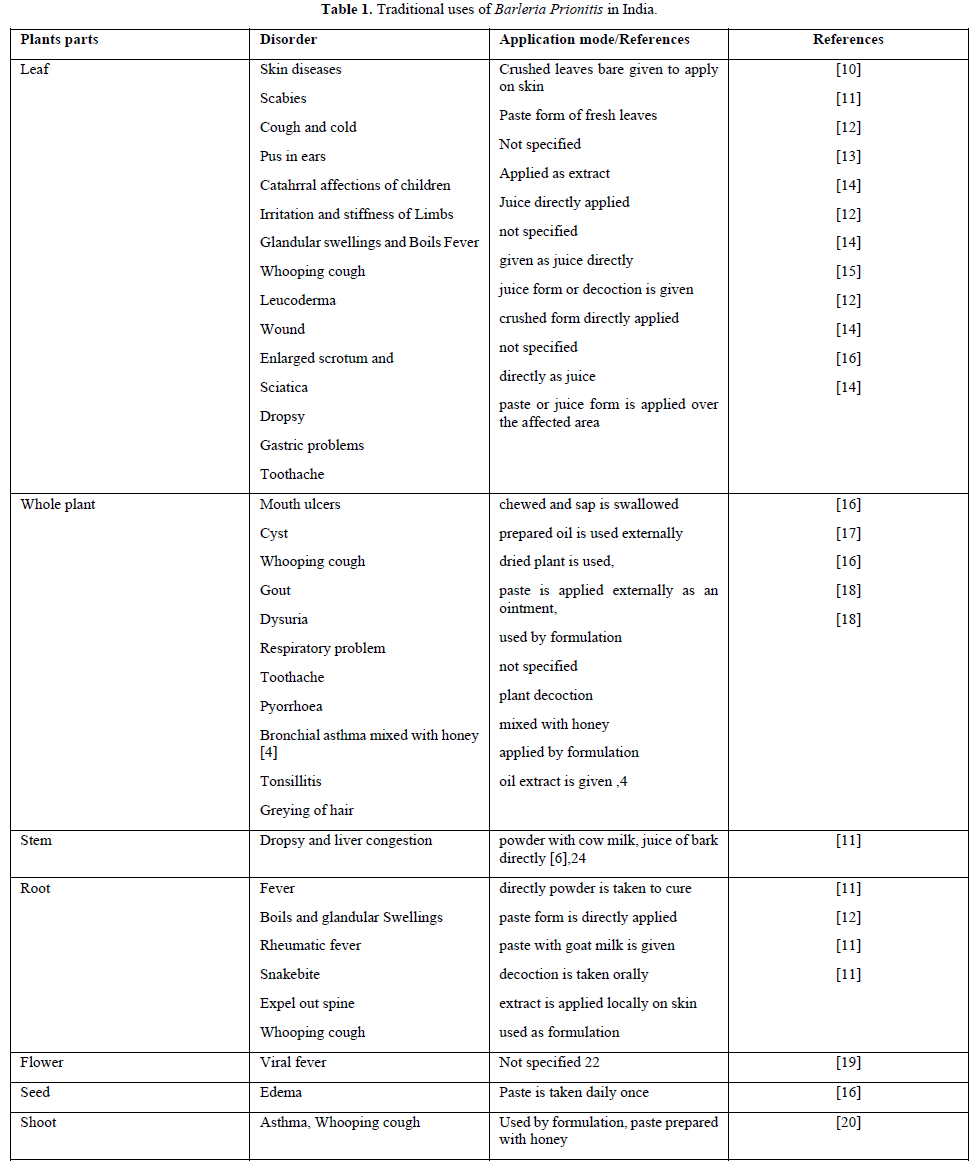 The Barleria prionitis leaves and flowering tops are reported to rich in potassium salt [21]. Preliminary phytochemical analysis of hydromethanolic extract of B. prionitis whole plant indicated presence of flavonoid, glycoside, saponin, tannins and steroid [22]. Phytochemicals isolated from B. prionitis such as balarenone, pipataline, lupeol, prioniside A and Prioniside B [23]. Glycoside are isolated from the areal plant are barlerinoside, verbascoside, shanzhiside methyl ester, 6-0-trans-p-coumaroyl-8-o-acetylshanzhiside methyl ester, barlerin, acetylbarlerin and 7- methoxy diderroside. Chromatographic examination of the alcoholic extract of the leaves and stems of Barleria prionitis Linn, revealed the presence of iridinoid glycosides such as acetyl barlerin and barlerin [9,21,15]. The leaves were reported to contain scutellarein, melilotic acid, synergic acid and 6-hydroxyflavones [24]. β-sitosterol, scutellarein 7- neohesperidoside and apigenine 7-O-glucoside are present in B. Prionitis. Two new anthraquinones compound isolated from Barleria prionitis and characterized as 1,8, dihydroxy-2,7-dimethyl 3,6-dimethoxy anthraquinone,1,3,6,8-tetra methoxy-2,7-dimethyl anthraquinone.

Preliminary phytochemical analysis of hydro-methanolic extract of B. prionitis whole plant indicated the presence of glycosides, saponins, flavonoids, steroids and tannins [25]. The leaves and flowering tops were reported to rich in potassium salts [5]. Several phytochemicals viz., balarenone (1), pipataline (2), lupeol (3), prioniside A (4), prioniside B (5) and prioniside C (6) has been isolated from the ethanolic extract of B. prionitis [10]. Numbers of glycosides include barlerinoside (7), verbascoside (8), shanzhiside methyl ester (9), 6-O-trans-p-coumaroyl-8-O-acetylshanzhiside methyl ester (10), barlerin (11), acetylbarlerin (12), 7-methoxydiderroside (13), lupulinoside (14) has been also isolated from the aerial parts [10]. Two anthraquinones derivatives has been also identified in this plant and their structures were characterized as 1,8, dihydroxy-2,7-dimethyl 3, 6-dimethoxy anthraquinone and 1,3,6,8-tetra methoxy-2,7-dimethyl anthraquinone [26]. The leaves were reported to contain scutellarein (15), melilotic acid (16), syringic acid (17), vanillic acid (18), p-hydroxybenzoic acid (19), 6-hydroxyflavones (20) [5]. Beside these phytochemicals, luteolin-7-O-β-D-glucoside (21), β-sitosterol (22), scutellarein 7-neohesperidoside (23), apigenin 7-O-glucoside (24), 13, 14-seco-stigmasta-5, 14-diene-3-a-ol (25) were also reported to present in B. prionitis [27] (Figure 2).

Alcoholic extract of roots and leaves oft of B. prionitis did not showed any toxic effect in adult albino rats. During the 14 days of study period death was not observed on oral administration of extract [30]. Using different dose of iridoid fraction in the safety evaluation and maximum tolerance dose study the oral LD50 with no signs of abnormalities or any mortality observed [31].

It is evident from different studies that B. Prionitis potentially carries medicinal properties and in India it has been traditionally used to cure various ailments. As per the studies of [10,11,14] refer (Table 1) leaves of B. Prionitis can be used to cure skin diseases, scabies, glandular swellings etc. if applied directly as paste or juice given orally (as mentioned specifically in Table 1). Similarly, according to the studies of [11,16] and other authors (Table 1) Stem, root flower and whole plant can be used to treat various diseases like viral fever, rheumatic fever whooping cough, Edema etc. In the present study author has mentioned the case studies of 30 patients getting relief from renal stones when they were advised to take a paste of leaves orally followed by glass of butter milk for 3 days in continuation and more than 70% patients got relief within fortnight. This proves its amazing diuretic property and other medicinal properties makes B. Prionitis a special medicinal plant while it is still merely known to common PR actioners and pharmacists as well.

Besides, the phytochemical analysis of various parts of the plant also indicated the presence of glycosides, saponins, flavonoids, steroids and tannins [25]. The leaves and flowering tops were reported to rich in potassium salts [18] and other important phytochemicals (Table 2) has been reported by different scientists.

Moreover, anti-diabetic activity, antidiarrheal activity, anti-toxicity and Gastro protective activities has also been mentioned when tested on rats by different workers as mentioned in above paragraphs.

Hence, present review about amazing medicinal properties of B. Prionitis as suggested and reported by various authors will be helpful to disseminate the knowledge among practitioners, pharmacists and other workers and opens a gateway for further studies on the basis of existing scientific reports.

In the present studies it has been found that B. Prionitis has tremendous medicinal properties and can be used as potential drug in various combinations to cure many diseases. Though it is a very commonly found herbal plant in almost every part of Asia but still its significant properties are rarely known and undiscovered. Hence further research is suggested to understand its pharmacological importance against numerous diseases and to identify its phytochemical metabolites. So that it can be used efficiently in pharmaceutical industry.