Copyrights: ©2022 Crawford C. This is an open-access article distributed under the terms of the Creative Commons Attribution License, which permits unrestricted use, distribution, and reproduction in any medium, provided the original author and source are credited.

Purtscher’s retinopathy is a rare micro vasculopathy eye disease that causes sudden painless loss of vision after a severe injury but can be associated with nontraumatic etiologies. In this case, a 30-year-old female had noticeable decrease in visual acuity and a central scotoma to her right eye after undergoing ankle surgery. The fundoscopic exam showed that she had Purtscher flecken and macular edema of both eyes with the right eye more severe than the left. A clinical diagnosis of Purtscher’s retinopathy was made based on history and fundoscopic examination. After a course of corticosteroid treatment, her vision improved to near complete resolution. Larger studies are needed to assess whether the use of steroids is beneficial in hastening recovery. This patient had one eye with no worsening in visual acuity but showed retinal changes in both eyes which indicate that increased screening may reveal a larger incidence of this condition in asymptomatic cases.

Purtscher’s retinopathy is a rare micro vasculopathy eye disease that causes sudden painless loss of vision after a major trauma such as severe head injury or long bone fracture. It is commonly seen in young or middle-aged men with a prevalence of 24 persons per million years. H(2007)owever, the number of cases may be underreported [1]. The exact pathogenesis of Purtscher’s retinopathy is unknown, but it is believed to be a microangiopathy that occurs due to occlusion caused by embolization of the terminal retinal arterioles that supply the superficial peripapillary capillaries. These retinal arterioles are present in the retinal nerve fiber layer (RNFL) within a vascular plexus called the radial peripapillary capillary (RPC) network [2]. Purtscher-like retinopathy is a similar condition associated with various nontraumatic etiologies including but not limited to pancreatitis, preeclampsia, vasculopathies, lupus and other connective tissue and autoimmune diseases [3-5].

Dr. Othmar Purtscher first described this retinopathy in 1910 and referred to it as “angiopathia retinae traumatica” or traumatic retinal angiopathy. Other descriptive titles include lymphorrhagia retinae, traumatic liporrhagia retinalis, and retinal tele traumatism [4]. Dr. Purtscher proposed that a sudden rise in intracranial pressure caused by increased cerebral spinal fluid results in lymph stasis [5]. The most accepted theory now is that intraretinal hemorrhages and capillary occlusions are caused by microembolization derived from fat emboli or leukoembolization. Leukocyte aggregation is initiated by C5a and complements play a role in secondary lymph extravasation and thrombosis from intravascular coagulation of platelets [5,6].

Purtscher flecken, which are large polygonal retinal white areas around the optic nerve head and fovea as well as between retinal arterioles and venules, are pathognomonic fundoscopic findings [4,7]. A clear demarcating line is seen between the normal and affected retina with surrounding optic disc edema [8]. The multiple white retinal patches are confined in the posterior pole where the capillaries of the superficial nerve fibers are [2,9]. Microvascular infarct of the RNFL results in cotton-wool spots and paravascular clearing may be associated with intraretinal dot-and-blot hemorrhages seen in Purtscher’s retinopathy [3,4,9,10].

Purtscher’s retinopathy is characterized by decreased visual acuity being the most prominent symptom. Patients will present with painless visual decline which can occur within 48 h if linked to a precipitating traumatic event. Visual disturbances can range from severe vision loss or persistent blurred central vision in one or both eyes [5]. Improvement in vision can occur spontaneously, but prognosis for visual outcomes varies with no proven treatment. If the underlying etiology is known, then addressing the cause and supportive care are indicated.

The two main therapeutic strategies consist of corticosteroid treatment or observation [3,5]. Other measures that have been suggested and reported include nonsteroidal anti-inflammatory drugs like indomethacin, traditional Chinese medicine or papaverine hydrochloride and oxygen although these treatments have very limited evidence [4,6]. Further studies to determine the exact pathophysiology of Purtscher’s retinopathy and evaluation on the efficacy of treatment are needed.

A 30-year-old female with recent ankle surgery presented to an ophthalmology eye center with decreased visual acuity to her right eye and complained of a “black spot” in her central vision that occurred 2 weeks prior after she had orthopedic surgery performed on her ankle. She wears single vision distance glasses with no previous eye surgery and no eye nor head trauma. The visual disturbance was constant and gradually worsening. Her best corrected visual acuity (BCVA) was 20/40 in the right eye and 20/20 in the left eye. The intraocular pressures (IOP) obtained by iCare tonometer was 16 on the right and 17 on the left. Fundus examination of the left eye showed a normal anterior segment and subtle swelling of the optic disc. The right eye had an inferior corneal scar and severe swelling of the optic disc with Paton’s lines or retinal folds indicative of papilledema. Fundus examination of the right eye also showed mild edema of the macula and scattered white dots and discoloration of the retina. The patient was referred to a retina specialist for further evaluation the next day. Her visual acuity the following day was 20/25-1 on the right and 20/20 on the left. The IOP obtained by Tono-Pen was 12 on the right and 13 on the left. An optic coherence tomography (OCT) was ordered, and the findings showed retinal thickening consistent with macula edema in both eyes. Given the patient’s history of recent long bone leg surgery and retinal findings, she was diagnosed with Purtscher’s retinopathy in both eyes (right side worse than the left).

This patient was prescribed oral tablet steroids (Prednisone) with a weekly tapering dose starting at 50mg per day and decreasing by 10mg each week. She followed up 11 days later with improvement in visual acuity and decreased inflammation in both anterior and posterior segments. Her BCVA at the follow-up appointment was 20/20 in both eyes. IOP at that time was 11 on the right and 9 on the left. The nerve and macular edema were markedly improved, so adjustments to the steroid medication were made to begin at 50mg and then taper 10mg for 5 days each (Figures 1 & 2).

One of the causes of Purtscher’s retinopathy is due to long bone fractures and is associated with orthopedic surgery [4]. In this case, a 30-year-old female had painless decrease in visual acuity and a central scotoma to her right eye after undergoing ankle surgery. Purtscher’s retinopathy is diagnosed clinically and by fundoscopic examination showing Purtscher flecken, optic disc edema, cotton-wool spots, and intraretinal hemorrhages. The disease is likely to be self-limited, but initiation of steroids may hasten recovery as in this case. In less than two weeks with steroid treatment, the patient’s vision and retina were markedly improved with decreased nerve and macular edema. 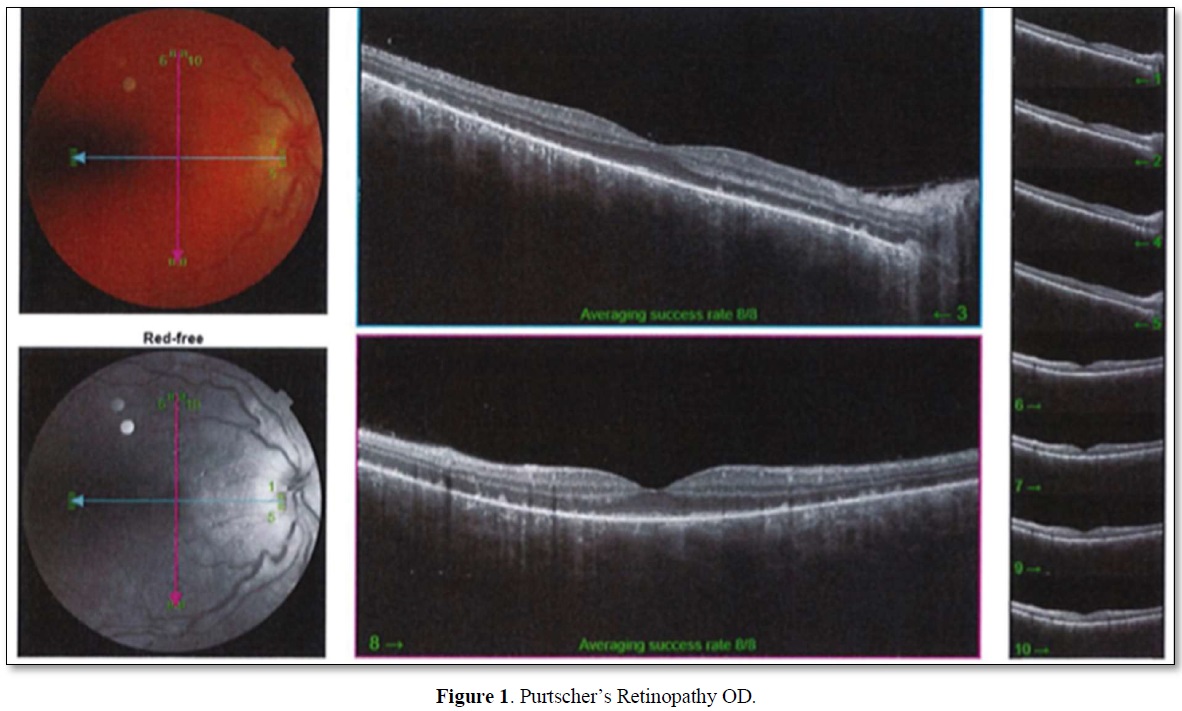 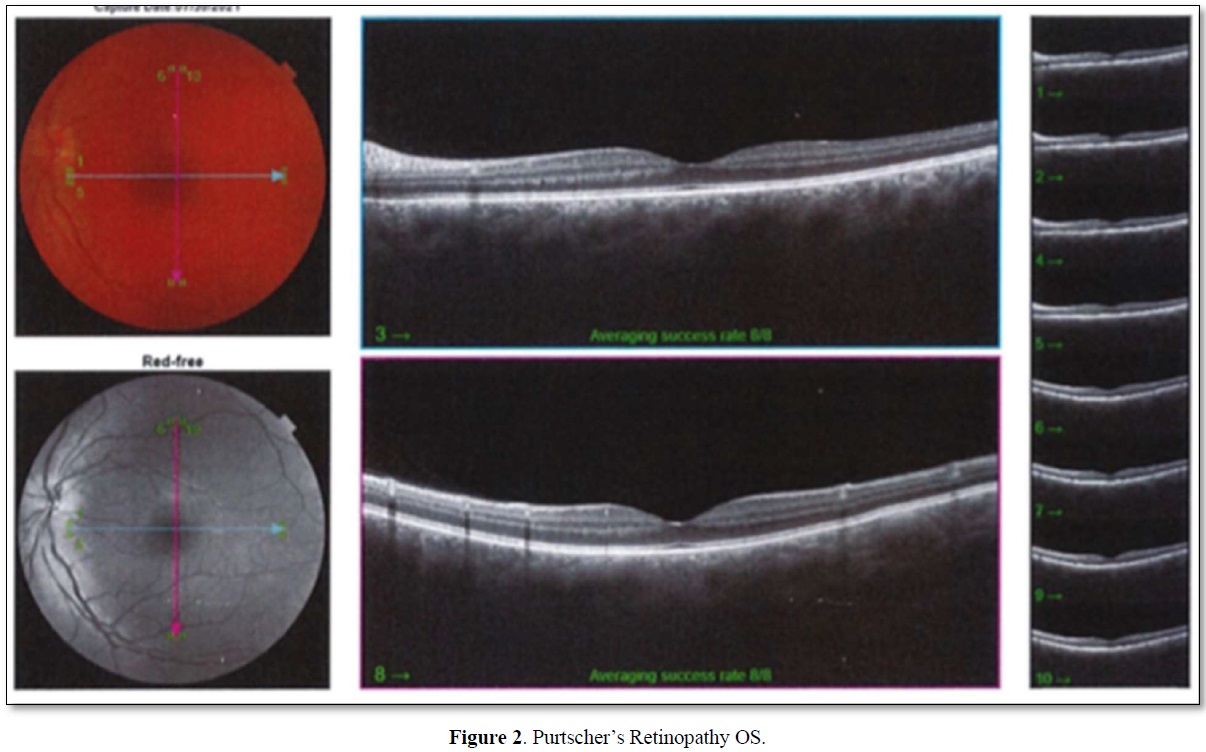 A study looking at 15 cases actively reported to the British Ophthalmic Surveillance Unit (BOSU) found that without treatment, spontaneous visual recovery is seen in 50% of the eyes with improvement of at least 2 Snellen lines within 6 months [1]. It has also been reported from a systematic review that there is no statistically significant difference in visual acuity improvement between use of corticosteroids for treatment and no treatment. However, the assessment of available data was of low quality with high risk of bias in visual acuity quantification [3]. The role of steroids for treatment still remains controversial and future research is needed to further evaluate this rare condition although the incidence of Purtscher’s retinopathy is likely of relatively high frequency especially in asymptomatic cases. The patient in this study had no visual impairment to her left eye but both eyes showed retinal changes. Increased screening in patients soon after head trauma, long bone fracture, pancreatitis or other conditions that have been found to be associated with Purtscher’s retinopathy would more accurately identify the incidence of this disease in both symptomatic and asymptomatic eyes.

Orthopedic surgery of long bones is a cause of Purtscher’s retinopathy. Diagnosis should be made early with fundoscopic examination showing Purtscher flecken which are large polygonal retinal white areas around the optic nerve head or fovea and between retinal arterioles and venules. Treatment with corticosteroids as shown in this case can be beneficial. Both eyes may be affected, although changes in visual acuity can be seen in only one eye.