Copyrights: ©2021 Edwiza D, Sovani I, Ratnaningsih N & Medissa. This is an open-access article distributed under the terms of the Creative Commons Attribution License, which permits unrestricted use, distribution, and reproduction in any medium, provided the original author and source are credited.

Purpose: To analyze the correlation between knowledges and attitudes with the practices of general practitioners in Primary Health Centers (PHC) in Bandung regarding diabetic retinopathy.

Diabetic retinopathy (DR) is one of the common microvascular complications in patients with diabetes mellitus (DM). The prevalence of DR and Vision-Threatening Diabetic Retinopathy (VTDR) from 35 population-based studies worldwide from 1980 to 2008 is 35% and 12%. Projected to Indonesian population in 2019, as many as 6.5 and 1.9 million peoples suffering from DR and VTDR in the productive age in Indonesia [1-3].

A study on GP’s KAP towards diabetic retinopathy by Pradhan in Nepal, showed a good level of GP’s knowledges about diabetic retinopathy, 98% disagreed that patients only examined their eyes if there were complaints, and 44% of doctors had never done an eye fundus examination of DM patients. A study by Abdulsalam in Nigeria found that 95.2% of GPs were not aware of the gold standard screening for DR, and 63.8% of GPs did not carry out routine eye examinations of DM patients, and only 3.7% of GP’s were able to detect retinal abnormalities from ophthalmoscope examination. In this study attitude shows a negative correlation with practice. This study shows that GPs have good knowledges about the frequency of examinations in diabetic patients and glucose control which delay the onset of DR. But this is not followed by the practice of referring patients to ophthalmologists. Attitudes and practices in DR management are influenced by the level of GP’s knowledges of the DR itself [4-6].

The Indonesian adaptation of the KAP survey questionnaire from several studies based on KAP studies regarding DR was adjusted to the KAP Study Protocol guideline from vision 2020 e-resource. The translation process was carried out using the forward-backward translation method and carried out by two bilingual translators. Preliminary test of the questionnaire was done to 30 GPs. Validity test was done using Pearson Product Moment test and the reliability test with the Alpha Cronbach reliability coefficient. The questionnaire was filled out using the self-administered method through the Google-form application to assess the knowledges, attitudes, and practices of general practitioners regarding diabetic retinopathy. The questionnaire was divided into 4 sections (inform consent and demographic data, knowledges, attitudes, and practices).

The first part of the questionnaire contained data on the subject’s characteristics; age, sex, duration of practice, and region of the PHCs. Categorical data analysis on the characteristics of research subjects was performed with the Chi-Square test. The second part of the questionnaire consisted of 36 questions out of 10 questions about Knowledges, with a score of correct answers = 1, and incorrect answers = 0. In the Attitudes section questionnaire, there were 8 questions that were measured using a Likert scale. Finally, the Practices section questionnaire consisted of 6 questions, with a score = 1 for each good practice done. The level of knowledge was divided into 3 categories (good if the score is ≥75%, fair 50 - 75%, poor <50%). The level of attitude was divided into positive attitude if score >50% and score <50% considered negative attitude. Practices were divided into good practice if score >50% and poor practice with score <50%. Spearman’s correlation analysis test was conducted between knowledges with practices, and attitudes with practices. Interpretation of hypothesis test based on correlation strength, correlation direction, and p value: The strength of correlation (r) based on the Guillford criteria:  0.0 -

Numerical data presented with a median, categorical data are presented with a number and percentage, the p-value is calculated based on the Chi-Square test. The significance value is based on p value Table 2, practices score was 33.48% (0-83). General practitioners in this study (85, 2%) had good level of knowledges, 100% GPs had positive attitudes, and 32% with good practices (Table 3).

This study showed that 83 (72.1%) GPs agreed that all diabetes patients should be referred to ophthalmologist, 110 (95.6%) GPs agreed that blindness due to diabetic retinopathy could be prevented if diabetes was treated early, 85 (73.9%) GPs agreed that eye fundoscopic examinations by non- ophthalmologists can help detect diabetic retinopathy. 88 (78.2%) GPs did not agree if the eye examination was done only if there were visual impairments. The results of the Likert scale score calculation on the attitude variable was 81.74% included in the excellent category (Table 4). 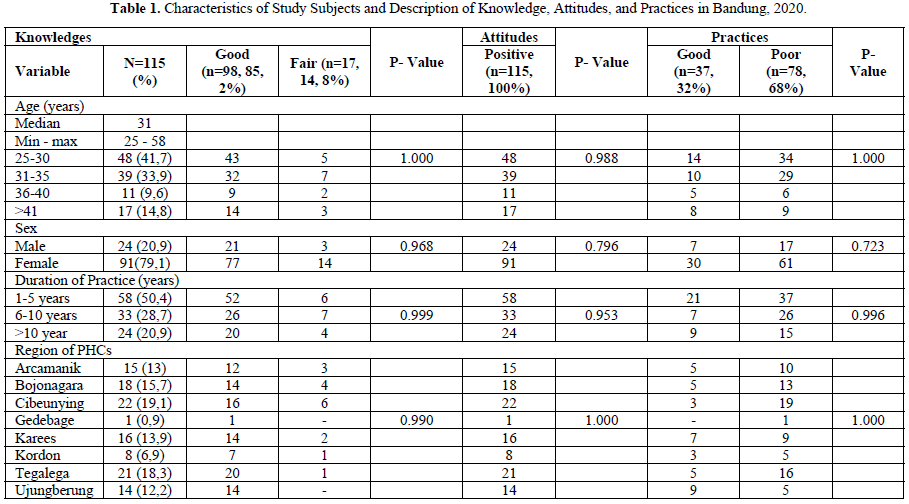 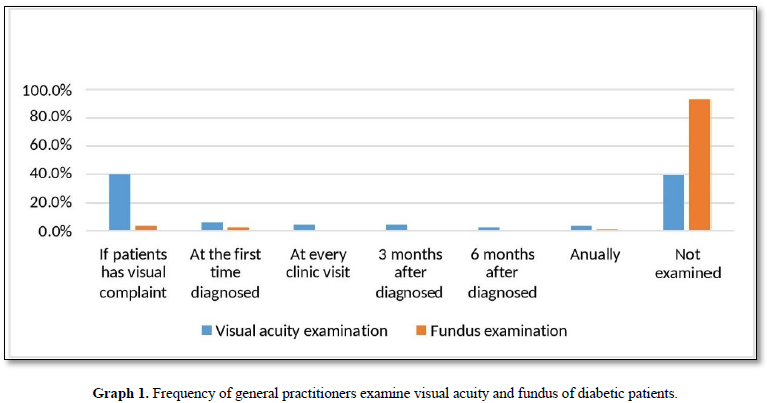 Barriers mentioned in this study were limited facilities and infrastructures (59%) such as the unavailability of fundoscopic equipment, no mydriatics eye drops, and inadequate space for eye examination. As many 15% of GPs said they did not have confidence to do an eye fundoscopy examination. Sixteen GPs (14%) mentioned the obstacles from patients who did not want to be referred, rarely routine control, and patient's economic problems. Some GPs (9%) mentioned the limitations of the limited time of examination, and 3% GPs mentioned the referral limitation by the National Health Insurance (Badan Penyelenggara Jaminan Sosial/ BPJS kesehatan) being an obstacle of referral to ophthalmologists (Graph 2). 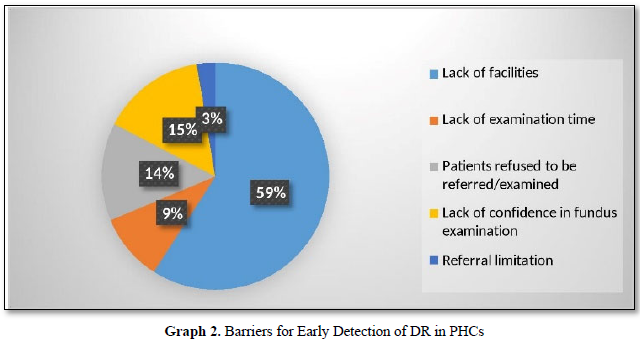 In this study 85.2% of GPs had a good level of knowledges regarding diabetic retinopathy. This is parallel with research by Pradhan in Nigeria stating 100% of GPs know diabetes can cause vision impairment. But contrary to the results of the Khandekar study in Oman obtained a good level of knowledge in 33% of GPs, Abu-amara with 54.3% results, and Ghosh in West Bengal, India stated that only 22% of GPs had good knowledges about diabetic retinopathy. A good level of general practitioner knowledges in this study can be caused by the majority of general practitioners with young age groups, and short working hours or short time spans since graduation from medical education, so that general practitioner respondents still remember lessons during medical education. [7,10,12,14,15].

All general practitioners (100%) in this study have positive attitudes. The majority of GPs agrees that all diabetic patients should be referred to an ophthalmologist (72.1%), routine eye examinations not only if there are visual complaints (78.2%), and eye funduscopic examinations by non-ophthalmologists can help reduce vision problems due to diabetes (73.9%). This is parallel with study by Abdulsalam stated that 81.9% of GPs disagreed if eye examinations were not the duties of GPs and choose to refer. In this study all GPs have positive attitudes towards the detection of diabetic retinopathy in diabetic patients who are expected to be able to increase the effectiveness and efficiency of the early detection program of DR. [10,12,16-18.]

Good level of practices in this study was obtained only in 32% of general practitioners. The majority of GPs (93%) in this study had never done an eye funduscopic examination and 85.2% preferred to refer patients for eye examinations. Niyonsavye [19] and Akun [20] stated that only 4.9% and 36% of GPs had ophthalmoscope access at their workplace. In this study a lower result was found, with only 14.8% of GPs having ophthalmoscope access at their workplace.

Poor practices of visual acuity examination and eye funduscopic examination in this study was due to inadequate facilities and infrastructures, such as the unavailability of an ophthalmoscope, Snellen chart, or adequate room for eye examination, so that the majority of GPs choose to refer patients if they had vision complaints. General practitioners in this study who had ophthalmoscope access and performed an eye fundoscopic examination, were not able to assess the details of the retina well. This can also be influenced by the unavailability of eye drops for pupil dilation at the PHCs and the lack of doctor's confidence in observing the eye fundus with an ophthalmoscope because it is not a routine examination done by the GPs. The chronic disease prevention program (Program Penanggulangan Penyakit Kronis/PROLANIS) at the PHCs is not always led by GPs, can be led by paramedics, so that general practitioners with good knowledges and attitudes can have poor practice regarding DR because they are not involved in the program. Other barriers to early detection of DR in PHCs such as patients who refuse to be examined or referred, as well as limited time of examination and limitation of the BPJS referral system that limited to a maximum of 15% of the total number of patients for a month [21,22].

Study on the knowledges, attitudes, and practices of general practitioners regarding diabetic retinopathy is widely carried out in various countries, but study with measurement of correlations between variables is still limited. In Al-Ghamdi's [23] study in Taif, there was a significant correlation between knowledges and practices. In Al-Ghamdi's [23] research, one-third of GPs in the study had attended additional training in diabetes and DR, while the majority of GPs in this study did not attended seminars/trainings on DR, this could affect the level of knowledge. In this study it was concluded that there was no statistically significant correlation between knowledge and practices, and between attitudes and general practitioner practices towards diabetic retinopathy. Other factors besides knowledge and attitudes that are not analyzed further in this study can influence the level of practices [16,17,23].

The strengths of this research compared to previous KAP researches on diabetic retinopathy were the correlation analysis and the proportion of knowledges, attitudes, and behavior categories measured in this study. Most previous studies were descriptive studies without analyzing the relationships between variables. Conclusions drawn from previous studies must also be done with caution given the inclusion criteria, unequal study sites, assessment methods, and questionnaire questions that have some differences [7,9,11,12,14,19,20].

A limitation of this study is that although the minimum number of samples needed for the correlation test was sufficient, not all general practitioners in the PHCs in the city of Bandung participated in this study. This research was conducted to coincide with the COVID-19 pandemic conditions, so that the Puskesmas General Practitioners were focused on examining and management of COVID-19, so this caused a lack of response to this study. This study did not analyze other internal and external factors that could influence the behavior of GPs towards diabetic retinopathy.

In this study, there was no statistically significant correlation between knowledges and practices, and between attitudes and practices of general practitioners in primary health centers in Bandung regarding diabetic retinopathy. Other factors beyond knowledges and attitudes that can influence practices need to be further evaluated. The confidence of general practitioners in PHCs needs to be improved in various early detection activities for diabetic retinopathy. Monitoring and inspection of facilities for examination according to the minimum standards in primary level health centers needs to be done by the PHCs and the City Health Office of Bandung.