Citation: Shōbo A. (2022) Effects of Sitting Position on Volumes of Hemi thoraces of Healthy Men and a Patient Who Underwent Thoracotomy with a Midline Incision. J Ageing Rehab Res, 1(1): 1-4.

Copyrights: ©2022 Shōbo A. This is an open-access article distributed under the terms of the Creative Commons Attribution License, which permits unrestricted use, distribution, and reproduction in any medium, provided the original author and source are credited.

In clinical practice physical therapists encounter patients with poor posture that may lead to changes taking place in the mechanics of thoracic excursion with accompanying abnormal breathing patterns. The thoracic cage principally consists of the thoracic vertebrae, ribs and sternum. If an incongruity, albeit a small one, occurs in this structure, its mechanics will be affected, resulting in a significant impact on respiratory function. Therefore, it was considered significant to clarify the relationship between changes in thoracic configuration and respiratory function.

post-thoracotomy patients may acquire restrictive lung expansion due to poor posture. It is important to understand thoracic configuration and chest movement. Anomalous alignment of the thorax may be evident in patients with respiratory conditions and post-thoracotomy. This leads to asymmetrical displacement of the thorax against the pelvis with differences in expansion during breathing. The aim of this study was to compare the left and right thoracic contours at different loci on the thorax.

The participants were tested in two sitting positions. These were an upright sitting position with a pelvic tilt of zero degrees and a hunchbacked sitting position with a pelvic tilt of 20 degrees. For both positions the feet were flat on the floor and the hip and knee joints in 90° of flexion. The pelvic angle was defined as an angle created by intersecting imaginary lines formed by infrared reflective markers attached to the skin over the anterior and posterior superior iliac spines. This was in conjunction with an imaginary spatial horizontal line, which was determined by using a spirit level.

A total of 84 infrared reflective markers each with a diameter of 9.5 mm were placed at specific points on the skin over the anterior and posterior aspects of the trunk. Any changes in their movement recorded changes in thoracic volume. The precise positioning for both the anterior and posterior markers was determined from six midline markers placed vertically in line on six levels, these being the sternal notch, third rib, xiphoid process, eighth rib, tenth rib and umbilicum, all of which are commonly used as a guide for palpation of chest movement. In relation to the six midline markers on the trunk an additional 78 markers, in order of their proximity to them, were placed medially, centrally and laterally on the anterior and posterior aspects of the trunk. Specifically, three markers were placed on either side of a midline marker, totaling seven markers in all.

The anterior half was encompassed within the space of the upper thorax demarcated by the sternal notch and third rib, and the posterior half within the space of the lower thorax demarcated by the xiphoid process and tenth rib. Using a three-dimensional motion analyzer Vicon MX (Vicon, Inc.), the difference in volume within the upper and lower hemi thoraces was measured in the two sitting positions during quiet breathing and volitional deep breathing, each with five or more consecutive breaths. An average value of three consistent breaths was taken for the calculation. In accordance with previous studies [1-6], the changes in thoracic volume were calculated from the amount of change in the movement of the infrared reflective markers attached to the body surface. For recording of this movement, seven infrared cameras were used, and the data were stored on a personal computer with a sampling frequency of 100 Hz.

The thoracic volume was calculated in accordance with the method developed by Ferrigno and Carnevali [1] and Nakabo and Yamamoto [3]. Specifically, six imaginary hexahedra were visualized for the upper thorax with three for the right and three for the left using four markers for each on the anterior and posterior aspects of the thorax at the levels of the sternal notch and third rib (Figure 1a). Similarly, this was repeated for the lower thorax at the levels of the xiphoid process and tenth rib (Figure 1b). Further, each of these imaginary hexahedra was, then, divided into three imaginary triangular pyramids to calculate positional vectors using the data obtained from the position of each marker in accordance with the method employed by Ferrigno and Carnevali [1]. Finally, the volume for both the hexahedra and triangular pyramids was calculated, culminating in any change of thoracic volume on a whole.

For statistical analysis, the Wilcoxon rank-sum test was employed for comparison of the changes in volume of the bilateral hemi thoraces. The level of significance was set at p<0.05, and, for the data analysis, the Statistics Package for Social Sciences version 23.0 (SPSS Japan Inc, Tokyo, Japan) for Windows was employed. This study was approved by the Bunkyo University Medical Ethics Review Board (Approval No. 2016-0034).

Dots indicate markers from which the hexahedra were constructed. Circles indicate imaginary midpoints. 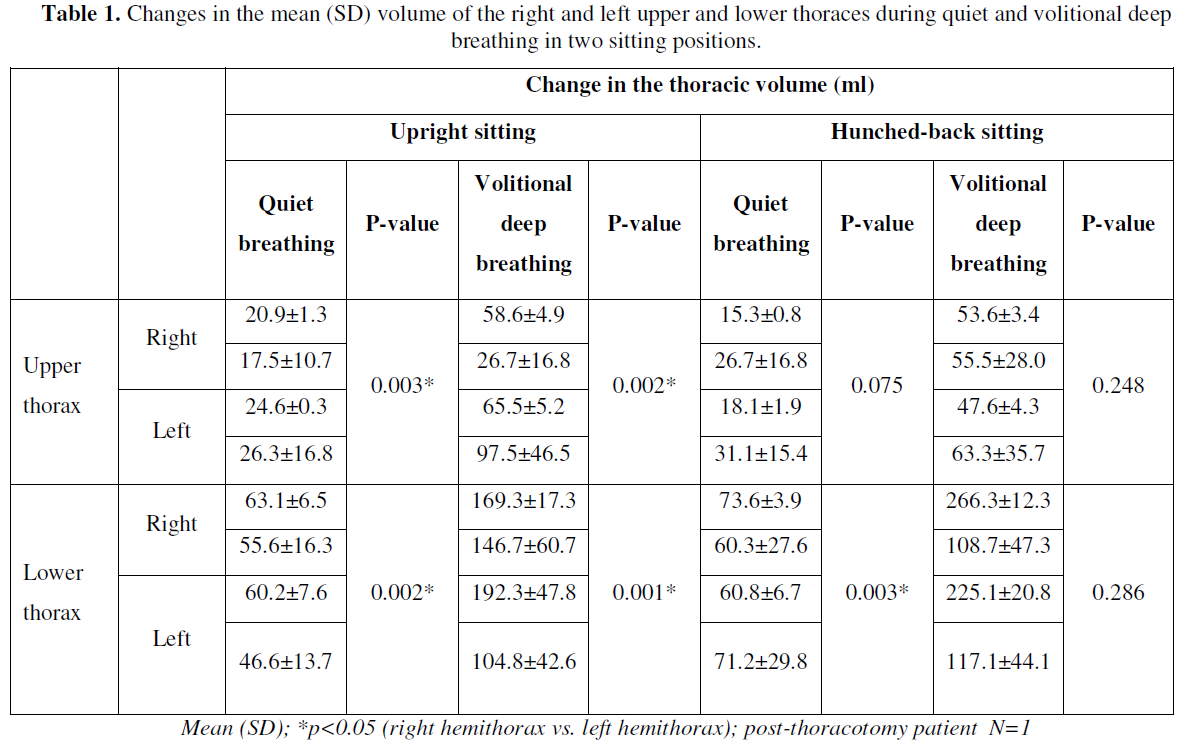 Therefore, it would be of interest in the future to further investigate and verify this factor. 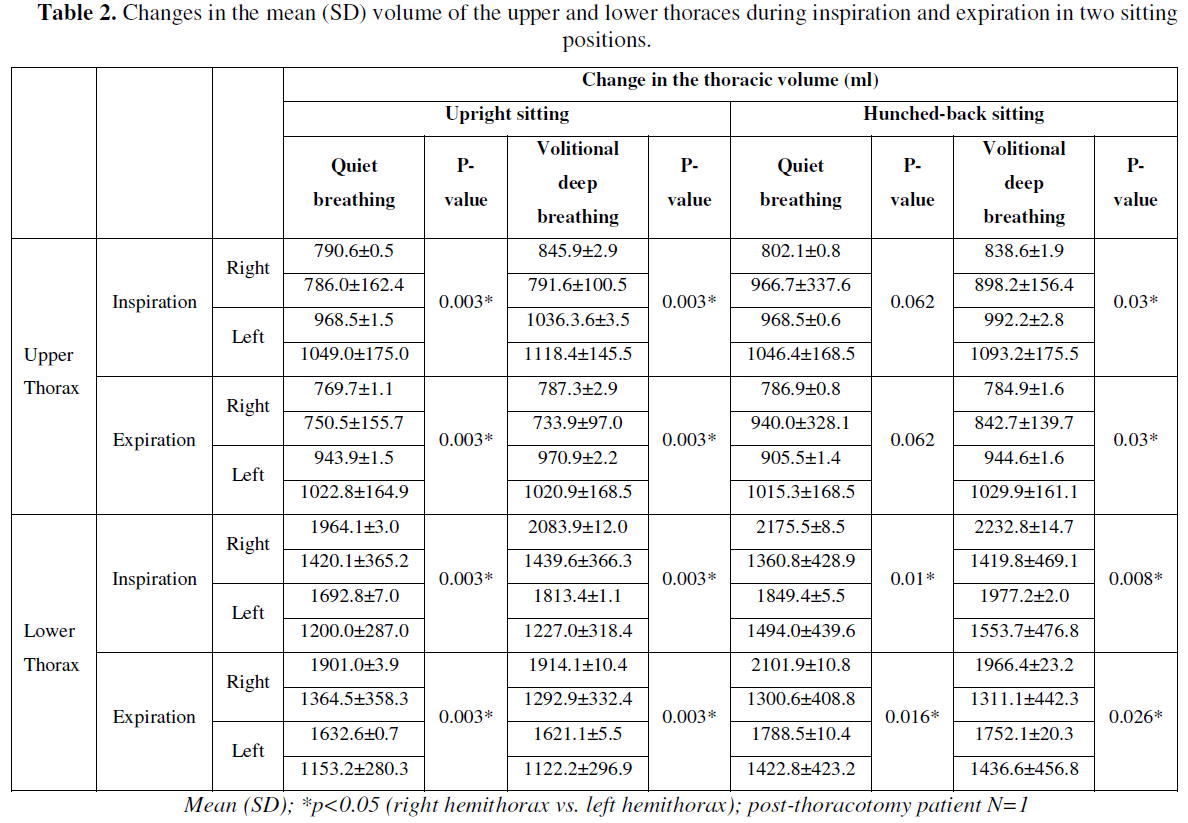 In the patient with a median sternotomy, left thoracic deviation was apparent during quiet expiration during upright sitting and, also, in hunched-back sitting with no neutralization of the thoracic contour.

Limitations of this study were that activity of the erector spinae was not examined in this study. However, future studies are required to investigate the role of this muscle in relation to respiratory function in various postures, together with abdominal external oblique, serrates anterior and latissimus dorsi muscles. In addition, our study population was rather small.