Copyrights: ©2022 Mawarid MM, Mafruchati M, Suprayogi TW, Widjiati, Hendrawan VF, et al. This is an open-access article distributed under the terms of the Creative Commons Attribution License, which permits unrestricted use, distribution, and reproduction in any medium, provided the original author and source are credited.

Carbamate insecticides are commonly used to get rid of pests attacking crops or fruits particularly carbofuran [1]. Residue on agricultural crops impact on health of humans and livestock’s, which is not the main target of using insecticide. The results of a research [2] found carbofuran residue in animal feed such as hay, corns, and rice (value of 12–102 ppb), which can cause residue in the meat as much as 110–269 ppb and in the cattle serum as much as 167–721 ppb. Carbofuran exposure can cause free radicals in the form of Reactive Oxygen Species (ROS), which will impact on the death of cells in the body including intestinal epithelial cells [3]. ROS can cause membrane lipid peroxidation so fatty acid chains in cell membranes are broken and then it causes injury in cells [4]. Exposure to toxic substances can cause inflammation in intestinal lamina propria so it will cause villi damage, congestion, oedema, neutrophilic infiltration [5]. Malonaldehyde (MDA) and SOD are used as indicator to lipid peroxidation and necrosis [6,7]. The presence of antioxidant compounds and an increase in ROS, which is imbalanced will lead to oxidative stress and cause the damage on DNA, lipid, and protein [8].

Mothers have hyperphagia at lactation period, which causes unstable condition of the mothers. The change in intestinal mucosa leads to an increase in the number of mucosal epithelial cells, which causes the change in villi condition [13]. Females that are at lactation period are more susceptible than females that are not at lactation period due to higher stress level, which triggers susceptibility to toxic substances [14]. The intestine can also be the main tract or portal in which a substance undesired by the body such as toxic substances, like insecticides and drugs enters the body [15,16]. Insecticides can cause necrosis, which leads to hypermotility and malabsorption due to a decrease in the number of erythrocyte cells [17]. Entry of toxic substances can cause free radicals to increase endothelial permeability and intestinal mucosa so it leads to infiltration of inflammatory cells in intestinal mucosa [18,19]. Cell membrane permeability increases so that absorption is impaired and leads to a clinical symptom that is diarrhea [20].

This research was carried out to find out the potency of Kebar grass extract, which contains antioxidants to prevent free radicals in order to decrease histopathological damage of the mice’s duodenum. Several indicators on the level of duodenum damage were observed: epithelial damage, congestion, edema, and infiltrasi neutrophil.

The experimental design in this research used a completely randomized design (CRD) using 42 pregnant mice divided into seven groups with six replications. This research was approved by the Research Ethics Commission of the Faculty of Veterinary Medicine, Universitas Airlangga (1.KE.107.06.2019).

A total of 42 pregnant mice were divided into seven groups: C, T1, T2, T3, T4, T5, and T6. Each group consisted of six replications. The mice were placed in plastic cages covered with wire and using husks as a base. The mice were fed on pellets and drank aquadest water ad libitum every day during the research.

The dried Kebar grass was first boiled in aquadest. 350 grams simplicial of mashed Kebar grass was macerated in a tube for 3x24 hours with 70% ethanol solvent with a ratio of 1:10. Next, it was filtered and the pulp was re-macerated twice with the same treatment. The macerated pulp was evaporated using a rotary evaporator at a temperature of 30-40oC to form a thick extract. The extract was put in a bottle and stored in the refrigerator.

Microscopic observation on the duodenum was carried out using a 400X magnification microscope by observing five different angles from each slide. The damage observed included epithelial damage, congestion, edema and neutrophil infiltration in duodenal epithelial cells of the mice according to [5] (Table 1). 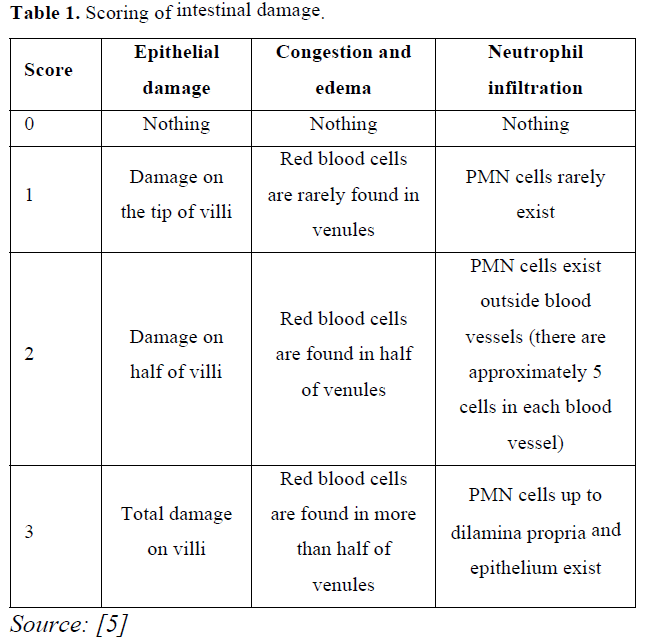 The scoring results on the changes that occurred in duodenal preparations were then analyzed using the Kruskall Wallis test followed by the Mann Whitney test with the application of SPSS (Statistical Package for the Social Sciences). 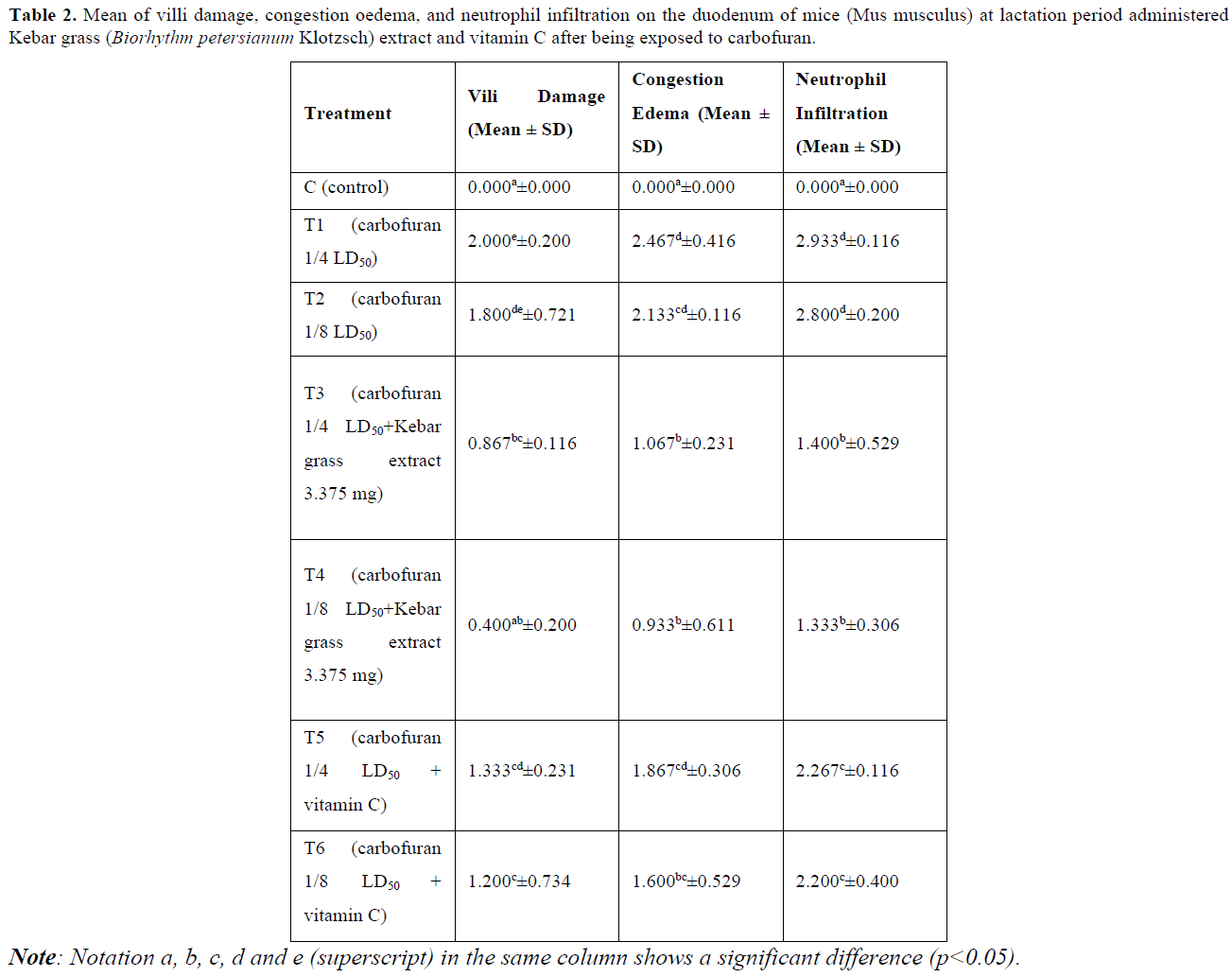 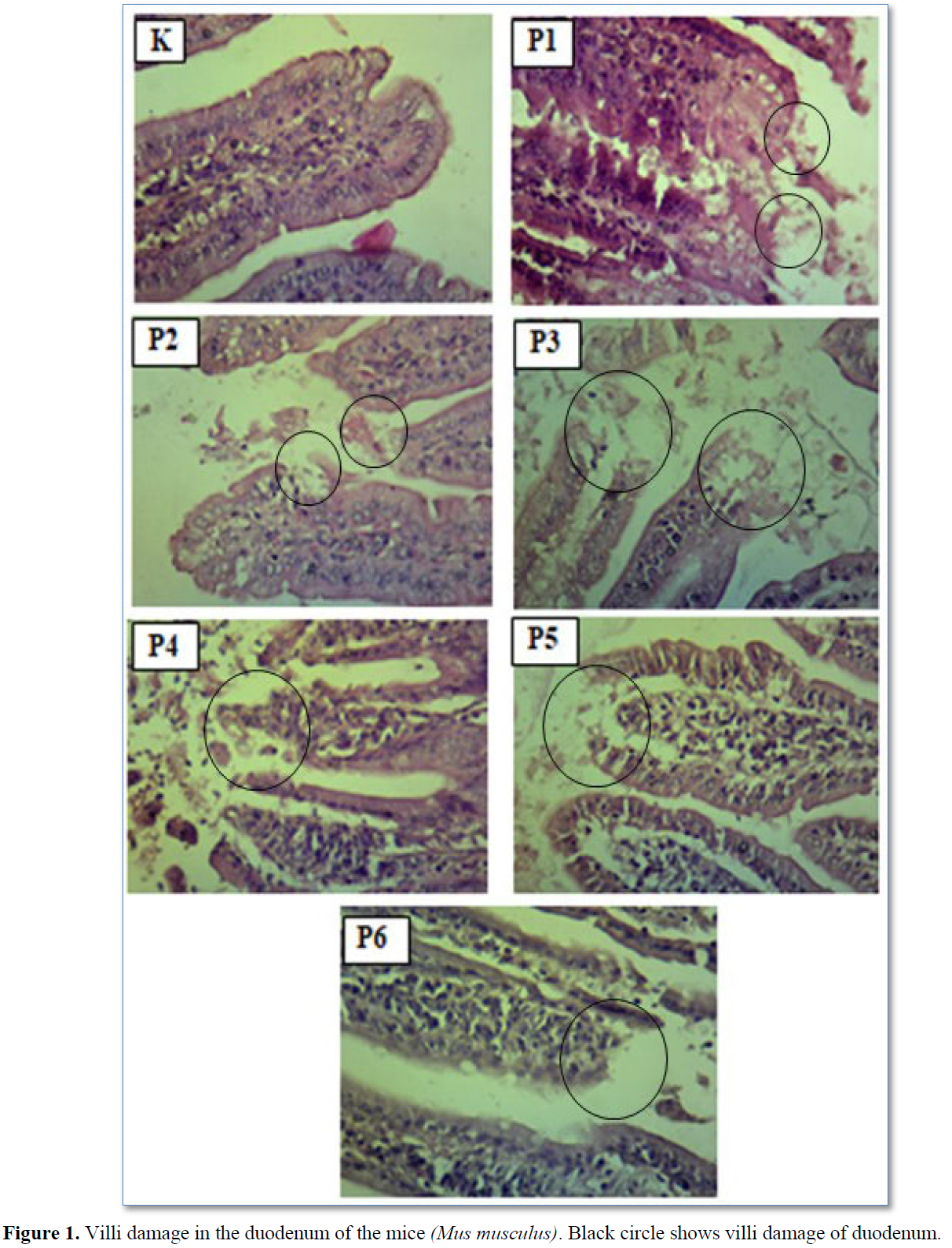 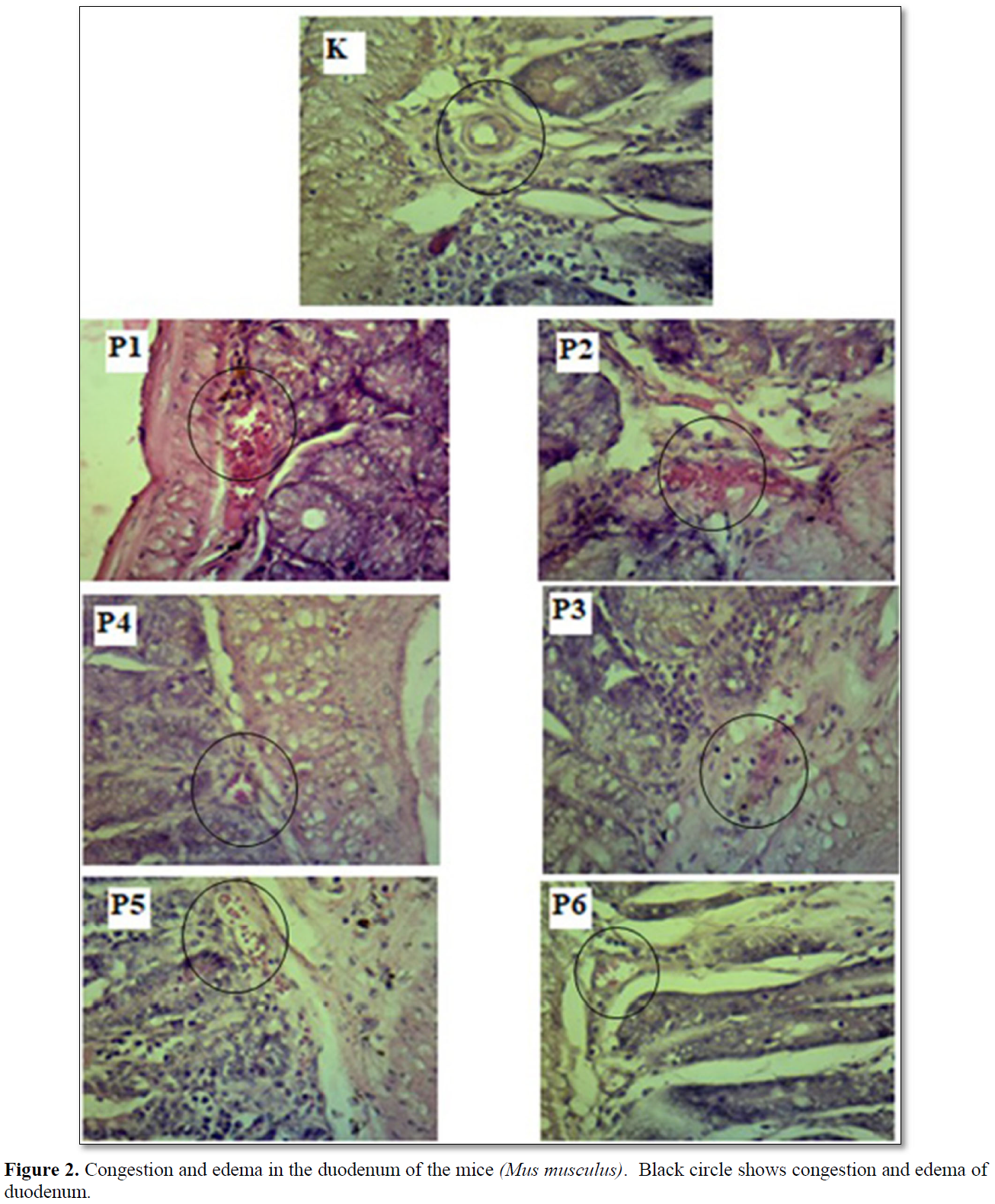 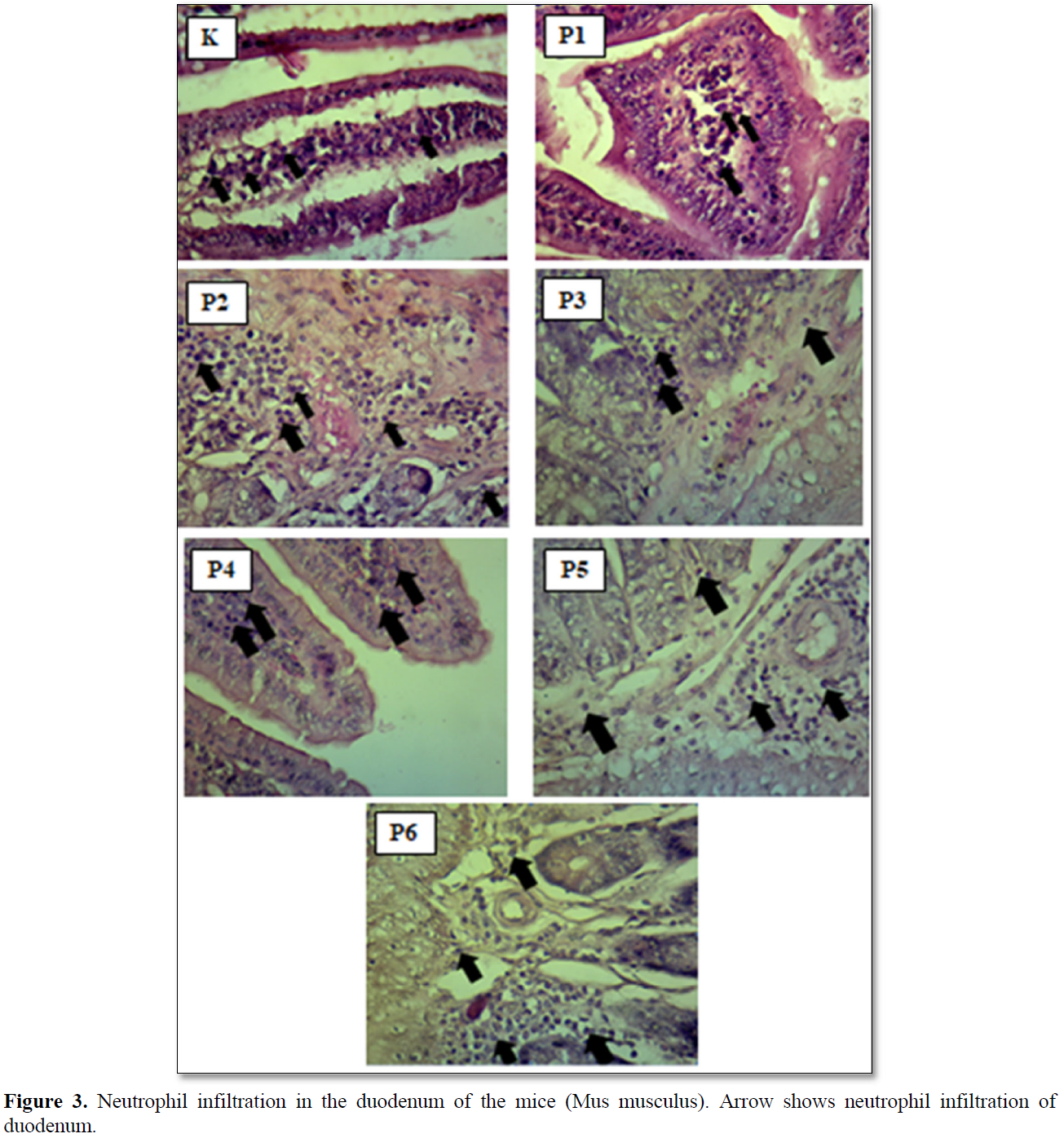 Carbofuran acts as a systemic poison with extreme toxicity to the stomach [23]. Carbofuran can enter the body through several ways that are absorption through the skin, inhalation and orally [24]. Oral exposure to carbofuran can irritate the digestive tract and can cause oxidative stress [25]. Carbofuran is metabolized by the body by cytochrome P450 to 3-hydroxy carbofuran, which can increase its toxic activity [26]. Oxidative stress is an imbalance between free radicals and antioxidants that is triggered by two common conditions, which are deficiency of antioxidants and excess production of free radicals [27]. Flavonoids in Kebar grass were non-enzymatic antioxidants that also protect cell membranes against oxidation from free radicals. Kebar grass also contains vitamin A and vitamin E. Vitamin A works by reacting with free radicals and causing them to stabilize [28]. Vitamin E functions to protect poly-unsaturated fatty acids and other cell membrane components from free radical oxidation by breaking the lipid peroxide chain. Examination on Clinical chemistry and histopathology is one of the methods used to detect the specific effects of chemical exposure [29,30].

Villi Damage: The damage is thought to have occurred as a result of exposure to toxic substances [31]. Villi damage was not found at the control group (C). Carbofuran administration at T1 and T2 was able to increase the villi damage in proportion to the increase in the dose administered (Table 2). Inflammatory cell activity occurs when the body is exposed to toxic antigens such as carbofuran, so a non-specific immune response that functions against these antigens at the site of the damage. In addition, the imbalance due to oxidative stress can result in malfunctioned endothelial [32].

Groups T3 and T4 showed that villi damage in the mice’s duodenum could be reduced (Table 2). The decrease in villi damage was due to vitamin A, vitamin E and flavonoids contained in Kebar grass, which was better at responding the toxic substances of T1 and T2. Flavonoids function as primary antioxidants because they serve as free radical acceptors, so that they can inhibit free radical chain reactions in lipid oxidation, which can prevent membrane damage [33].

Groups T5 and T6 also showed a reduction in villi damage due to exposure to carbofuran (Table 2). The reduction in villi damage was better at responding to the toxic substances of T1 and T2. Vitamin C has a strong ability to reduce and acts as an antioxidant in reacting with hydroxyl [34]. Vitamin C is easily oxidized by atmospheric oxygen or by the enzyme ascorbate oxidase. However, vitamin C is a very powerful antioxidant and can prevent the oxidation process in food and in the body system [35].

In the control group (C) congestion and edema were not found. T1 and T2 could increase congestion and edema in proportion to the increase in dose administered (Table 2). Congestion is a pathological reaction as a manifestation of inflammation due to injury. Congestion changes occur due to vascular hydrostatic pressure and osmotic pressure. Osmotic pressure is the pressure caused by proteins in plasma [36]. Edema is an indication of hydrostatic pressure or an error in imbalanced blood osmotic pressure, increased capillary permeability, lymph, and obstruction. This condition can be caused by toxic chemicals, viruses, bacteria and parasitic diseases [37].

Groups T3 and T4 showed that congestion and edema could be reduced (Table 2). The reduction in congestion and edema was due to vitamin A, vitamin E and flavonoids contained in Kebar grass which was better in responding to the toxic substances of T1 and T2. Antioxidant compounds work by inhibiting the oxidation rate of other molecules or neutralizing free radicals [38]. Groups T5 and T6 showed that vitamin C was able to reduce congestion and edema due to exposure to carbofuran (Table 2). The reduction in congestion and edema was better at responding to the toxic substances of carbofuran at T2 to T1. Vitamin C can act as a co-antioxidant by regenerating a-tocopherol radicals [39]. Another characteristic that makes vitamin C an ideal antioxidant is the low reactivity of ascorbyl radicals formed when ascorbic acid reacts with ROS. Ascorbyl radical is not a strong oxidizing agent and reducing agent, so it reacts slowly with oxygen. This cycle produces a strong defense system against free radicals or other oxidant compounds [40].

The results of this study indicate that administration of Kebar grass extract as an antioxidant is better at reducing the level of villi damage, congestion, edema, and neutrophil infiltration in duodenum of the mice at lactation period compared to vitamin C.

The authors express sincere thanks to the Ministry of Research, Technology and Higher Education of the Republic of Indonesia for funding the research, and the Dean of Faculty of Veterinary Medicine Universitas Airlangga for providing all necessary facilities and funds in conducting this research work.

The Ministry of Research, Technology and Higher Education of the Republic of Indonesia and the Dean of Faculty of Veterinary Medicine Universitas Airlangga.

The authors declare no conflict of interest.