Copyrights: ©2022 Widjiati, Joewono HT, Miftakhurohmah S, Madinah A, Latisfian M, et al. This is an open-access article distributed under the terms of the Creative Commons Attribution License, which permits unrestricted use, distribution, and reproduction in any medium, provided the original author and source are credited.

The need for protein in pregnant women in the first to third three-semester has increased from 1 gram, 10 grams to 30 grams [7]. One of the foods that have a high protein content is mackerel. Mackerel is known to have high protein content and contains omega 3, which is an unsaturated fatty acid [8]. The need for omega 3 in pregnant women according to the RDA is 0.3 grams per day. Omega 3 is an element to compose neuron cell walls in brain formation [9].

This research has received ethical approval No. 2.KE.033.04.2020 from the ethics commission of the Faculty of Veterinary Medicine, Universitas Airlangga. The type of research used was a laboratory experimental research with a post-test only control group design. This study used 30 rats (Rattus norvegicus) divided into 3 groups and each group consisted of 10 rats. The control group (C) and the two treatment groups, which were administered mackerel oil (T1) and omega 3 (T2). In both treatment groups, mackerel oil and omega 3 were administered from the first day to the 17th day of gestation with a dose of 3.24 mg/day each. The oral administration was conducted at 10h Western Indonesian Time, using a feeding tube. On the 18 day of gestation period of Rattus norvegicus, then cesarean section was performed.

Preparation and Dosage of Mackerel Oil

The mackerel oil was obtained by extracting approximately 70 grams of dry mackerel powder (14.29% moisture content), extracted by socklet using 300 ml of chloroform solvent for 2 h and 10 min or 8 times circulation. The solvent was separated by a Buchi-rotary evaporator to obtain chloroform-free mackerel oil. The mackerel oil was further characterized by its density, viscosity, saponation number and acid number, and its toxicity was tested using the Brine Shrimp Lethality Test (BSLT) method. The composition of mackerel oil was determined using Gas Chromatography-Mass Spectrometry (GC-MS) equipped with a 30 meters long RTX-5MS type column and was operated at a column temperature of 100-280°C.

Types and Dosages of Omega 3

The type of omega 3 used in this study was omega 3 (Omeheart, RPI Santa Anna, USA). The calculation of the dose administered to the experimental animals was as much as 3.24 mg/rat/ day.

Mackerel oil and omega 3 were administered orally using a gavage feeding tube once a day at 10h Western Indonesian Time.

The female Rattus norvegicus were sedated with ketamine and acepromazine-xylazine, and then were slaughtered by cervical dislocation. Fetus born by cesarean section were weighed, and from each female rat, 3 baby rats were selected to obtain the heaviest, medium, and lightest weight. 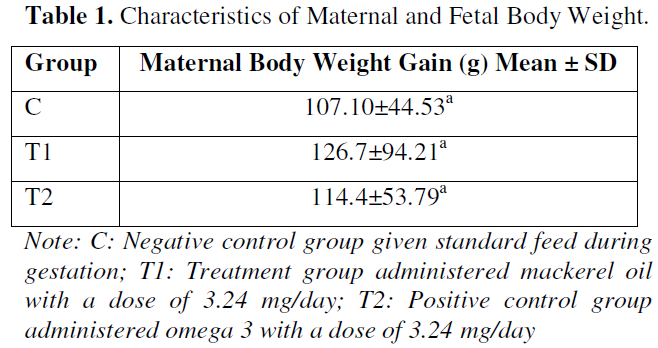 Based on the results of the Mann Whitney test it was found that administration of mackerel oil extract gave a significant difference in fetal weight gain when compared to the control but did not cause a significant body weight gain when compared to the group administered omega 3 (Table 2). According to Vinding [12] administration of fish oil supplements to pregnant women can increase fetal birth weight, prolong gestational age and increase the size of the gestational sac. Fulfillment of nutritional consumption in pregnant women comes from the sea such as fish, which can increase fetal length and weight [13]. Fish oil contains fatty acid compounds of omega 3 and 6. Omega 3 fatty acids are known to increase fetal weight and length by increasing the ratio of prostacyclin to thromboxane. Prostacyclin is a prostaglandin produced by endothelium, which has a vasodilating effect on blood vessels, while thromboxane has a vasoconstrictive effect. An increase in the prostacyclin thromboxane ratio causes an increase in mother's blood flow to the fetus so that the supply of oxygen and fetal nutrition can be fulfilled to support fetal growth [14]. 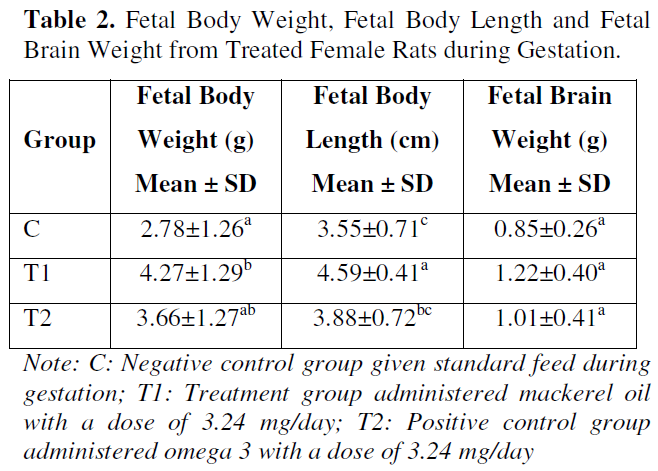 Based on the results of Mann Whitney test, it was known that there was a significant difference between fetal length in the control group and the group administered mackerel oil extract, but it was not significantly different from the group administered omega 3 at a dose of 3.24 mg/day. This is because the extract of mackerel oil contains 16.65-20.09% protein and 3-12% fat [15]. Mackerel oil contains 32.8 and 4.5% omega 3 and 6, respectively [16]. Apart from omega 3, omega 6 also has an important role for fetal growth. Omega 6 helps build muscle mass while omega 3 is useful in the mechanism of bone formation to support the formation of fetal extremities. Omega 3 plays a role in calcium absorption, release of calcium through urine, prostaglandin synthesis, lipid oxidation, osteoblast formation and inhibits osteoclastogenesis. High omega-3 plays a role in the formation of trabecular structures and superior cortical, which plays a role in bone density and quality [17].

Omega 3 cannot be synthesized by the body itself but must be supplemented by food. Omega 3 is an important component needed in pregnancy because it plays a role in the process of forming the brain and retina and affects the length of pregnancy. Most of the formation of brain structures occurs in the womb. The brain has the ability to transform linoleic and alpha linoleic acids into long-chain fatty acids such as AA and DHA. Fats and fatty acids are important structures that make up white matter [18]. Fats, especially phosphoglycerols and cholesterol, are rich in AA and DHA [19]. Therefore, the consumption of AA and DHA-rich foods as needed will affect the formation and weight of the brain. DHA accumulates in the uterus, which will then be passed on to the fetus through the placenta [9]. DHA and AA accumulate rapidly in the brain during the later stages of pregnancy. The administration of a dose of omega 3 and mackerel oil in accordance with the daily nutritional needs is important for the formation of the fetal brain during pregnancy. The nutritional content of mackerel includes 89 mg/100 g protein, 18.33 mg/100g fat, 78.56 mg/100g amino acids, and 73.34mg/100g carbohydrates [20].

The authors declare that there is no conflict of interest.