Copyrights: ©2022 Pertiwi H, Sofyan MS, Dadi TB, Rosman N & Kamaludeen J. This is an open-access article distributed under the terms of the Creative Commons Attribution License, which permits unrestricted use, distribution, and reproduction in any medium, provided the original author and source are credited.

A dog 10 years old, female, 30.0 kg weight, golden retriever breed reported with history mucus discharge from vagina for past 2 days was brought to Veterinary Teaching Hospital of Airlangga University, Surabaya. Based on hematology analysis and X-ray examination the dog was diagnosed as bilateral ovarian carcinoma in situ. This case was treated with ovariohysterectomy surgery combined with chemotherapeutic medication treatment using doxycycline. After a week post-surgery, the dog recovered well and was active normally.

Ovarian disease in female dogs is rare [1] but in female animals it can affect the health, fertility, or even animal life. One reason for the lack of diagnosis of ovarian disease may be that many female dogs are neutered at an early age [2,3]. Cases of ovarian tumors in dogs range from 1-6 percent [4]. Epithelial tumors are more common and constitute 46 percent of canine ovarian tumors [5]. unknown the exact cause of an ovarian tumor. In dogs, ovarian epithelial tumors have been induced in prostitutes who were given diethylstilbestrol for a long period [6].

ovarian disease arising from ovarian tissue that is not fully resected [3]. In the case series, it was found that 7 of 19 female dogs with ovarian remnants also had neoplasms from the reproductive system [7]. Of special clinical relevance are diseases that can cause hyper esthetics or uteropathies such as cystic endometrial hyperplasia and pyometra [1,2]. Ovarian tumors cause various disorders in the sexual cycle such as anestrus, masculinization, hyperadrenocorticism, nymphomania and alopecia, or they could be asymptomatic [8,9].

The diagnosis of ovarian tumors is difficult because clinical symptoms often are vague and non-specific [2]. In this case it is rarely found, could be due to OH in young animals. Some authors did not specify the origin of the specimens [10]. Hence, in those cases, data on the animals, age, their breed, medical and reproductive history and clinical findings are not available.

Affected bitches with steroid hormone producing tumors may show persistent estrus, prolonged anestrus or no clinical signs [1,11]. Other signs may be irregular estrous behavior, cystic endometrial hyperplasia, endometrial metaplasia and pyometra [3,12-14]. Diagnosis can be confirmed by endocrine findings, ultrasound or laparoscopy palpation by palpation of neoplastic masses. Ovarian masses on ultrasound may be classified as solid, solid with acystic component or cystic [2]. Additional diagnostics should include complete blood work and thoracic radiographs [3].

Canine ovarian tumors can be grouped into germ cell tumors, sexcord stromal tumors and epithelial cell tumors [15]. Sex-cord stromal tumors are well-known for ovarian malignancy in domestic animals. Originated from the specialized stromal of the ovary, these tumors are unilateral, smooth surfaced, and round with diameter between 20 to 30 cm [16]. One of the most common neoplasms in canine ovary is granulosa cell tumors (GCTs) that originate from sex cord stromal cells. In many cases dogs are euthanized due to a perceived poor prognosis [2,17]. Therefore, this report aimed to explain practice management of ovarian carcinoma in cats which resulted in effective recovery conditions after some particular treatments.

Physical examination revealed no sign of anemia, body temperature was normal (38.5°C), pulse rate 120 bpm and painting. X-Ray examination showed spondylosis deformans due to the age and the position of the small intestine slightly pushed forward (Figure 1). Blood and serum were collected for hematology and biochemistry examination to show any abnormality value of internal organs work. Base on blood test, there is not any infection and inflammation have been occurring, therefore the early diagnosis of pyometra have been rejected and suspected as malignant tumors. 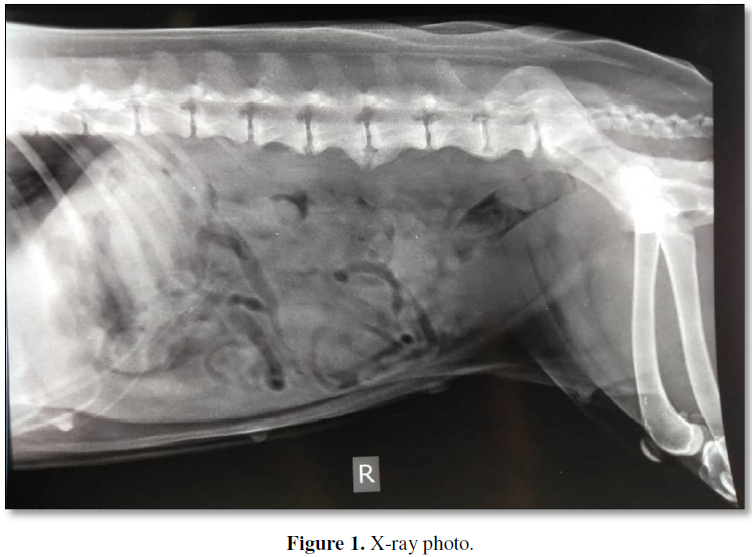 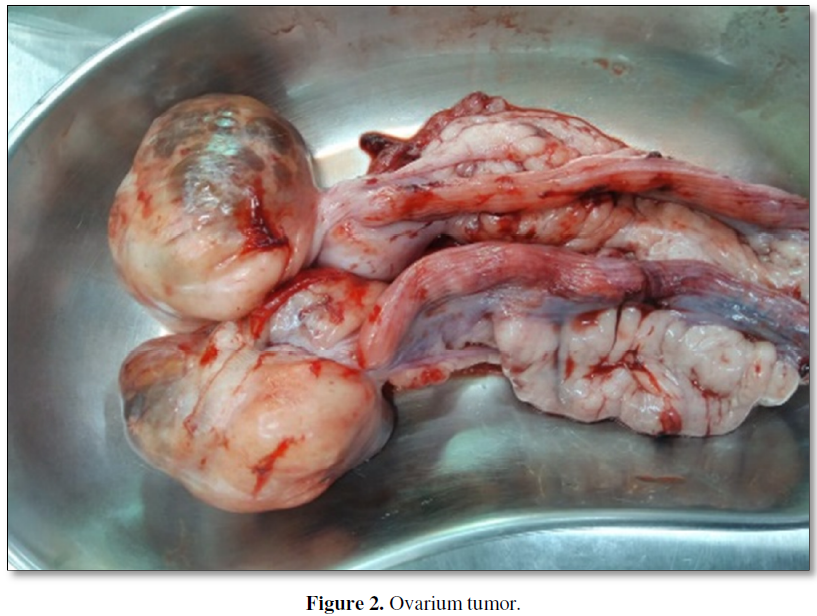 The treatment showed a good progression and no more mucus discharge from the vagina. After five days of surgery the dogs seem normally actives and there were not pathological changes.

Ovarian epithelial tumors arise from cells of the surface epithelium that also extend into the ovarian cortex [1]. Some case reports, epithelial tumors represent 40%-50% of all ovarian neoplasm and are often bilateral [2,18-20]. They are represented by adenomas and adenocarcinoma that can further be described as papillary, serous, cystic or pseudo mucinous [3]. Papillary adenomas and adenocarcinomas, are usually observed near the ovarian surface as cauliflower-like lesions [20]. Also, rete adenomas, fibromas and undifferentiated carcinomas have been described [3].

Granulosa cell tumors (GCTs) has been described in the bitches as well as the other types of sex-cord stromal tumors. GCTs may produce and increase secretion of hormones such as estradiol, progesterone and a-inhibin [21]. As a result of its hormonal secretion, GCT often induces persistent estrus, vulvar swelling with discharge, and alopecia [1,22].

In humans, ovarian carcinoma is the second most common gynecological cancer and, in most cases, a poor prognosis for long-term survival [23]. Treatment procedure in human ovarian neoplasm is cytoreduction of gross to

Some cases with hormone producing tumors may require additional supportive treatment that includes the use of granulocyte colony stimulating factor and erythropoietin to stimulate production of neutrophils and erythrocytes, respectively [3]. In a dog with ovarian adenocarcinoma, intracavitary cisplatin chemotherapy after OH led to an 8-month resolution of malignant effusion10). Higher cisplatin concentration at the tumor surface by intracavitary than intravenous administration has been reported in a rat peritoneal tumor model and advantage is seen only in the outer 1.5 mm of the tumor tissue [25].

There are no consistent abnormalities in blood examinations in dogs with ovarian tumors [2,26], Clinical signs are generally nonspecific, but indications of hormonal disturbances including abnormal estrus cycle, or polyuria/polydipsia, vaginal discharge may help indicate a possible ovarian tumor [2,26]. Ultrasonographic examination has also been used to detect ovarian masses in dogs [2,27,28]. Ovarian adenocarcinomas appear as irregular-shaped masses with heterogeneous echogenicity or with multiple anechoic cysts [2,27,28]. Diez-Bru [2] reported that ovarian masses less than 6 cm in size, especially when involved bilaterally, could be identified as of ovarian origin when the kidney was used as an anatomic landmark.

It could be concluded that in the above case, the dog was diagnosed ovarian carcinoma in situ. Ovariohysterectomy surgery with chemotherapeutic medication treatment with doxycycline combination is the best solution for this case to avoid the metastasis.