Citation: Dutta B, Borah NJ, Borah U, Baruah P & Kar D. (2021) Pattern of Distribution and Diversity of Icthyospecies in the Towkak River in Assam and Nagaland. J Vet Marine Res, 1(1): 1-6.

Copyrights: ©2021 Dutta B, Borah NJ, Borah U, Baruah P & Kar D. This is an open-access article distributed under the terms of the Creative Commons Attribution License, which permits unrestricted use, distribution, and reproduction in any medium, provided the original author and source are credited.

Fishes occur wherever water of reasonable integrity exists, from deep sea depths exceeding 8,000 m to mountain lakes above 5,000 m altitude. About 58% of all fishes are marine and c 41% live in freshwater, with the remaining 1% designated as diadromous, moving regularly between the ocean and freshwater systems. The proportion of freshwater species is rather striking in the light of the availability of freshwater habitats. Approximately 97.5% of Earth’s water is oceanic salt water, leaving only 2.5% as fresh. However, c 99.7% of the freshwater is frozen in polar ice caps and glaciers, stored as groundwater, or locked-up as soil moisture or permafrost [1]. In fact, only about 0.009% of the water on Earth is available as habitat for the more than 10,250 freshwater fish species [2]. It is for this limited resource of freshwater that we compete with fishes and other organisms. Additionally, of this available freshwater, about 99% by volume is in lakes and only 1% is in rivers.

India is one of the Mega biodiversity countries in the World and occupies 9th position in terms of fresh water mega biodiversity. Concomitantly, North-Eastern (NE), region of India has been identified as a ‘Hotspot’ of Biodiversity by the World Conservation Monitoring Centre. This rich diversity of the region could be assigned to certain reasons, notably, the geomorphology and the tectonics of this zone. The hills and undulating valleys of this area gives rise to large number of torrential hill streams, which lead to big rivers, and finally become part of the Ganga-Brahmaputra-Barak-Chindwin-Kolodyne-Gomati-Meghna system. In India, there are c 2500 species of fishes; of which, c 930 live in freshwater (FW) and c 1570 are marine [2,3].

In addition to the above, it may be noted that very little works were done on the habitat mapping of fishes in NE India, except the works of Kar [2,4,5], Barbhuiya [6], Dutta [7], Das [8] etc. It is also in this context, the present work was undertaken to reveal the fish diversity and their distribution in the Towkak River, Assam and Nagaland; mainly to bridge the information gap.

Fish samples were collected from the various fish landing centers of the studied zone. The information on availability of fish species were collected from the local fisherman and fish traders. Fishes were identified following standard literature [2,3,5,9-20]. The fishes were sampled by following standard procedure using cast net, gill net, drag net etc., of required dimensions [2,12].

The distribution pattern of the fishes was analyzed and mapped with help of GIS based software Quantum GIS Dufore 2.1.

A total of 96 species of fishes under 57 genera belonging to 24 families and 8 orders (Figure 1). Cyprinidae family having highest number (41 fish species with 24 genera) belonging to Cypriniformes order followed by Channidae and Bagridae family (8 and 7 number fish species, 2 and 4 genera) belonging to Perciformes and Piluriformes order. The fishes of other family notably, Belonidae, Ambassidae, Anabantidae, Chacidae, Heteropneustidae, Synbranchidae, Labroidei, Tetraodontidae were found to be have 1species in each category. 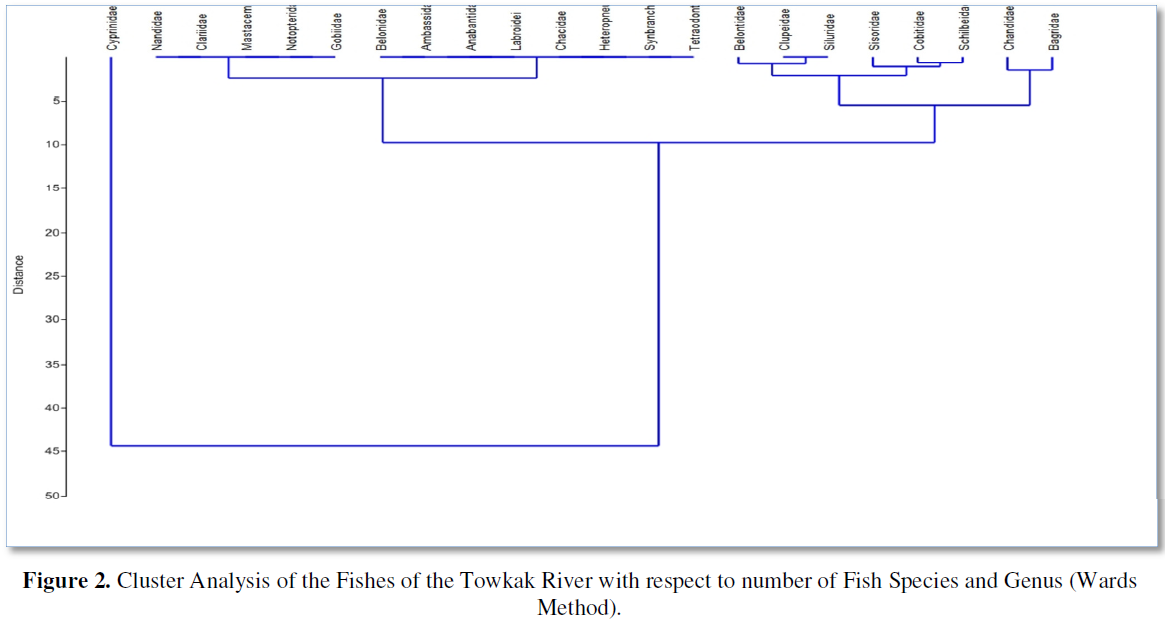 Distribution of fishes in each season 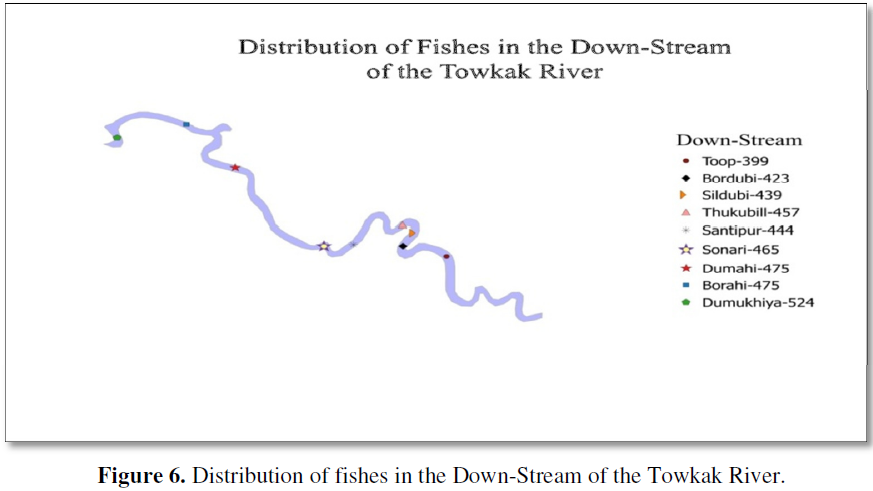 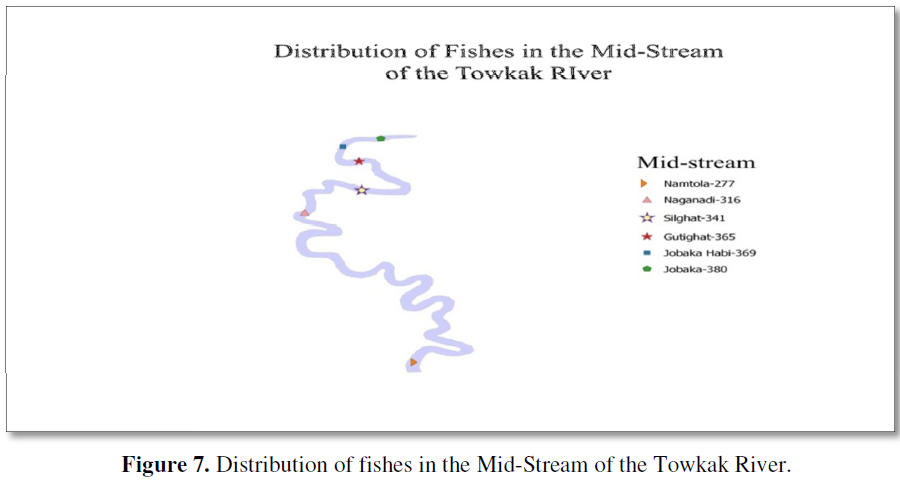 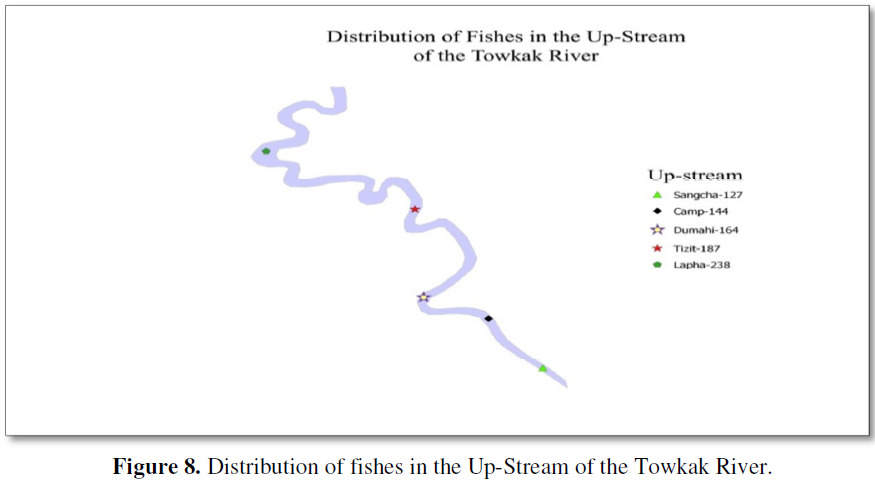 The present work supports the diversity and distribution of fish species view that influence the adjacent ecosystems affect diversity and productivity of the fish populations. Factors affecting diversity of the fish species and species richness in the river, is governed by a number of factors viz., biotic and abiotic. The human interpretation in the riverine courses leads to destruction of the riverine habitat. These biotic as well as abiotic factors act together in regulating the local species richness. A brief study of fishes and their habitat relationship subjected to wide variation of biodiversity. The sustainable development requires integrated land and water planning based upon the river catchment, which is a fundamental unit to incorporate a new environmental need, to promote long term objectives.