Bada AA* and Adewole SO

Copyrights: ©2022 Bada AA & Adewole SO. This is an open-access article distributed under the terms of the Creative Commons Attribution License, which permits unrestricted use, distribution, and reproduction in any medium, provided the original author and source are credited.

Ethnoveterinary practice is the use of local materials to treat animal diseases like Babesiosis, diarrhea, mange and so on [1-3]. It is mostly practiced in the Villages of less developed countries. The animals that were involved include ruminants [1], rabbits, aquatic or terrestrial birds and other livestock. The local materials can include medicinal plants, various food, palm oil, pepper and so on [1]. The advantage of this ethnoveterinary practice over the orthodox medicine is that some parasites were resistance to this orthodox medicine, which cannot be possible with ethnoveterinary practice because it is easily accessible, effective, cheap [1] and contain some active/ original ingredients that can be reactive against the parasites causing the diseases in terrestrial bird.

Ethnoveterinary practice of domestic fowl had been practiced in some villages in less developed countries [4], he also reported diminishing poultry birds like duck, guinea fowl and pigeon, domestic fowl and turkey in villages. Mehlhorn and Rehkamper [5] indicated some parameters such as color, size, habitat and behavior and brain size in domestication of birds. Some birds like parrots were kept under intensive system [6]. The diseases affecting the domestic bird include diarrhea, cold, lameness [4].

Reproductive rates are determined by a number of physiological factors in domestic birds [7]. Poultry bird in rural areas feed on natural foods than in urban [8]. Diseases of poultry in rainy season Include fowl pox, cholera, diarrhea, tortocolis and coccidiosis.

It had been shown that some species of ruminants are diminishing in Ilara-mokin, Ondo-state, Nigeria [3]. So this research investigates at what will happen to poultry bird in Ilara-mokin. And to see which Indigenous knowledge they used to treat their poultry birds.

Description of the study area

Twenty 0ne questionnaires were administered to respondents through open-ended interview [1,3]. The study employed the use of questionnaire and they were given to the rural dwellers for response to it on poultry animals. They were randomly chosen in the town.

Some criteria were used to study the domestic birds investigated which include behavior, color, and habitat, availability within the locality, season, feeding, management, area found and specie.

Statistics of the data

Excel was used to analyze the study. 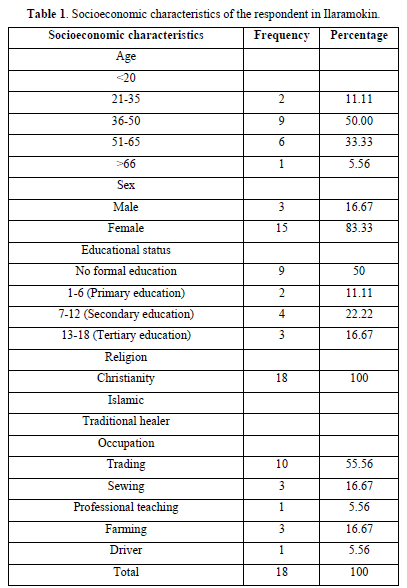 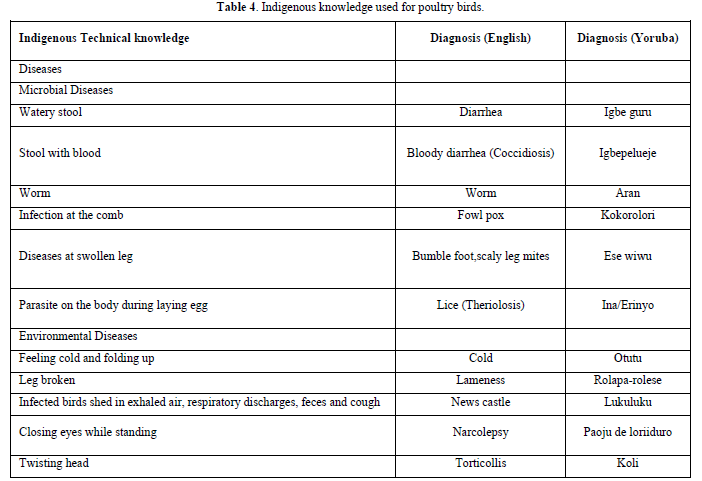 The different breed include: Domestic fowl, Chicken and Agric with specific color 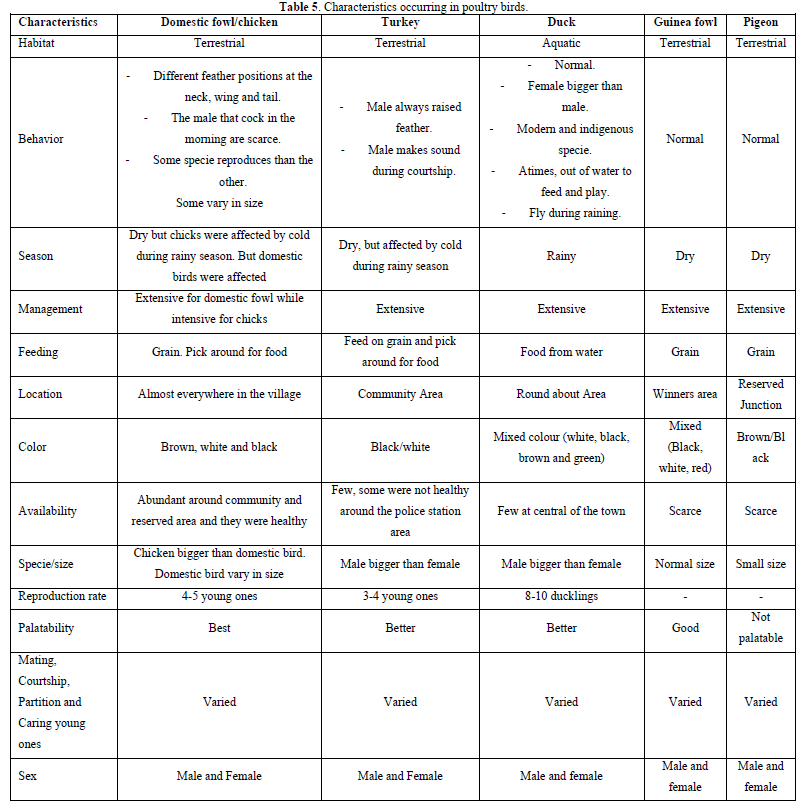 The growth rate, resistance to diseases, reproduction rate and palatability, availability differences size, feather variation, color, tallness and comb variation between domestic fowl and broiler can be due to molecular composition of the birds.

The study can be of economic importance to the state and the country, which can increase the meat production in poultry and income to the country if these poultry birds were preserved.

There is need for biodiversity conservation of medicinal plant and birds like diminishing domestic fowl (that cock early in the morning), indigenous duck, pigeon and guinea fowl within the villages through the provision of gene bank for the poultry birds and the research can be of ecological risk importance and need for policy making on consumption of diminishing poultry animals i.e. duck, pigeon and guinea fowl with in the villages.