Paranoiatic Psychosis: Aspects Epidemiological, Clinical and Prices in Charge in the Service of Psychiatry of the National Hospital Chu of Conakry of Donka

Copyrights: ©2021 Doukouré M, Keita MM, Soumaoro K, Conté S & Conté M. This is an open-access article distributed under the terms of the Creative Commons Attribution License, which permits unrestricted use, distribution, and reproduction in any medium, provided the original author and source are credited.

Background: This descriptive retrospective study aimed to determine the prevalence of paranoid psychosis, to describe the socio-demographic characteristics, the clinical profile and the management of these paranoid psychosis patients.

Methodology: This was a retrospective descriptive study, transversal, lasting seven (7) years from January 1st, 2005 to December 31st, 2011. We included in our study, all the files of the patients having consulted in the psychiatry department during the study period, hospitalized or not, in which the diagnosis of paranoid psychosis was retained.

Conclusion: The management of paranoid psychosis has been difficult because of the reluctance of the patients concerned, as well as the lack of information in some cases. A prospective study would, however, be necessary to appreciate the extent of this pathology and improve this management.

The paranoid psychosis or paranoia defined in 1899 by KRAEPELIN as a chronic and constitutional psychosis characterized by the "insidious development and internal cause of a lasting delirious system, unshakable going hand in hand with conservation, clarity, order in thought, the will and the action [1].

It is a pathology in which the subject does not recognize himself as sick and the restoration of the therapeutic relationship is difficult or impossible. It is also a pathology whose social, professional and legal consequence are important (relationship difficulties, dictatorial behavior, absenteeism and the triggering of endless trials).

The prevalence of paranoid psychosis is often appreciated in the literature. In Sweden, it accounts for 6.9% of psychiatric hospitalization cases [2]. In sub-Saharan Africa, data are scarce or inaccessible.

According to Kretschmer, there are three clinical profiles depending on the type of paranoid personality: Paranoid combat personality (or sthenic) aggressive, obstinate, quarrelsome; Paranoid personality of wish, with overestimation of self without fighting spirit (idealistic, unknown inventors); Patient paranoid relationship of sensory, rather asthenic, shy emotional, vulnerable [3,4].

Diagnosis is based on the existence of paranoid delirium characterized by: hypertrophy of self (overestimation of self, pride or false modesty, haughty reserve, contempt of others, intolerance, susceptibility and psychorigidity); mistrust (suspiciousness, concealment tendencies); the falsity of

judgment; bad social relationship; and chronic evolution. Diagnosis is often not easy because the paranoid is consistent in their words, often rely on reality and delirium that can be done in sector. The clarity and coherence of the speech very often leads to the adhesion of the entourage, which causes the delay in the decision-making. Evolution is always chronic, often enameled with fertile moments. Management often requires hospitalization and treatment under stress. The use of neuroleptics remains unavoidable.

In Guinea, a single study was conducted on this pathology, Condé [5] in his doctoral thesis in medicine revealed a prevalence of 2.69% in 2004. The rarity of this pathology in psychiatric consultations and the difficulty of its management motivated the choice of this theme. Our general objective for this work was to describe the epidemiological, clinical and therapeutic aspects of paranoid psychosis in the psychiatric ward of Donka National Hospital, Conakry University Hospital. Specifically, to determine the prevalence of Paranoid Psychosis, describe the socio-demographic characteristics of patients, describe the clinical profile and management of these patients.

The psychiatric service of the Donka National Hospital served as the framework for this study. It is a national reference service for the management of mental illnesses and addictions. It has a capacity of 64 beds distributed among three pavilions (A, B and C) and directed by a team composed of 4 psychiatrists including two masters of aggregated conferences of child psychiatry and adult psychiatry; 8 general practitioners; 8 nurses, and 5 surface technicians. It has a triple vocation of care, training and research.

Our study focused on the medical records of patients admitted for paranoid psychosis. The records of consultation, hospitalization, and a data collection sheet were used as support.

This was a descriptive cross-sectional retrospective study lasting 7 years, from January 1, 2005 to December 31, 2011 (inclusive). Included in this study were all records of patients who consulted with the psychiatric service during the study period, hospitalized or not, for whom the diagnosis of paranoid psychosis was retained. However, we did not include incomplete files (when the psychiatric examination was not completed and patients with a mixed diagnosis). We conducted a comprehensive census of all patients admitted for paranoid psychosis to the psychiatric ward of the Donka National Hospital during the study period.

Our study variables were quantitative (prevalence, age, number of hospitalizations and the evolution of the disease) and qualitative (sex, origin, ethnicity, reasons for consultation, Delirium, types of delirium, theme of delirium, extent of delirium, type of paranoid personality, psychoactive substances consumed and possible association of psychoactive substances, level of education, socio-professional activity sector, marital status, psychiatric history, type of treatment and type of treatment). Our data was manually collected on a pre-established survey sheet and entered using the Microsoft Word, Excel 2007 Office Pack; our results were presented in tabular form and figures, commenting and discussing with current data from the literature.

Our main difficulty has been the incomplete filling of medical records.

Out of a total of 5777 patients admitted to hospital or outpatient, 99 cases of paranoid psychosis were identified, a prevalence of 1.7%. The age groups of 35-39years, followed by 30-34years and 25-29years were the most affected, respectively 22.2%; 17.1% and 15.1%. Male patients, singles and married women were the most affected with a sex ratio of H / F: 2.95. The majority of our patients were Malinke from Upper Guinea with 32.3% who were in the informal sector. Our patients consulted for behavioral disorders (59.6%). 29.3% of our patients used a psychoactive substance. 70.7% of our patients were treated in hospital. Incisive and sedative neuroleptics (85.9%) were the most used psychotropic drugs in treatment.

We conducted a 7-year cross-sectional retrospective study, from January 1, 2005 to December 31, 2011, at the psychiatric ward of Donka National Hospital. During the study period, 5777 patients consulted, including 99 cases of paranoid psychosis, with a hospital prevalence of 1.7%. This prevalence is variously appreciated according to the authors: Condé [5], who in his doctoral thesis in 2004 had found a prevalence of 2.69%, Ostling [6] reported a rate of 6.9%. This low prevalence is explained by the delay of consultation in specialized hospital structures on the one hand and the use of traditional treatment on the other. The age groups 35-39, 30-34, and 25-29, were the most affected, at 22.2%, 17.1% and 15.1%, respectively.

The majority of our patients (27.3%) had an evolution before the first consultation from 6 months to 1 year (25.3%), from more than 2 years to 3 years (22.2%). Our data are consistent with those of the literature [7-8], which describes paranoid psychosis as a chronic pathology whose evolution is greater than 6 months. The high rate of progression before the first consultation is explained by the insidious nature of the evolution of this disease over several years and especially the cultural aspect which delays the consultation in a specialized environment.

In our study, the male sex was the most affected, 74.7% of the cases against 25.3% for the female sex with a sex ratio between men and women equal 2.95. This finding is related to the literature data [9-12]. The majority of our patients were Malinke or 32.3% and came from Upper Guinea with a frequency of 38.4%. We found a high frequency of Malinke without finding a scientific explanation. This question opens an anthropological and ethno-psychiatric investigation of this ethnicity in its socio-cultural functioning. As for the reasons for consultation, the most frequent were behavioral disorders; logorrhea and sleep disorders are 59.6%; 48.5% and 38.4%. Regarding delusions, the most met was the delirium of interpretation is 67.7% followed by passionate delirium 18.2% and delirium of sensitive relationship 14.1%. Our results are comparable to those of Condé [5], who reported 59.25% delirium of interpretation; 19,45% of passionate delirium and 18,35% delirium of relation of the sensitives.

The theme of persecution was the most predominant, 77.8% followed by passionate themes 15.4% and themes of magnitude 5.1%. Our data are consistent with some data from the literature [6,13-15]. The high frequency of these themes in our study, could be explained by psychopathological personality traits in patients who are a factor of predisposition to the occurrence of this theme. The paranoid fighting or quarreling personality was the most recovered, at 76.8% followed by sensory type 14.1% and desire 9.1%. Our results are comparable to those of Condé [5], who reported a rate of 54% querel, 42% sensory and 4% desire. In 29.3% of our patients, we did not note the consumption of psychoactive substances, followed by 18.1% who consumed by associating several psychoactive substances.

This high frequency of patients who did not use psychoactive substances could be explained by their psychopathological profile and their personality traits which can be considered as means of protection.

In our study, all levels of education were achieved with a predominance of primary level 33.3% followed by non-level 27.3% and secondary level 23.2%. Our data are in line with those of Condé [5], who had found; primary level at 32.04%, secondary at 28.17% and level at 23.94%. This high frequency of the primary level is linked to the profile of the paranoid personality who, because of the hypertrophy of the ego, the subject discovers that he is self-taught and stops schooling but mainly because of his bad social relationship. All sectors of socio-professional activities were affected with a predominance of the informal sector 32.3% followed by no profession 21.2%. The high frequency in the informal sector is explained by the fact that the majority of the population lives in this sector.

We found in our study that single people were the most affected with a frequency of 39.4%, married (35.3%) and divorced (12.1%). The predominance of singles is explained by the fact that they are young people whose onset of a psychological disorder compromises any proposed marriage. As for the married, this is due to the existence of paranoid personality traits and marriage difficulties (nuptiality both early and intense) that generate significant disturbances of behavior and social maladjustment. Hospitalization was the predominant management modality, i.e., 70.7% compared to 29.3% of outpatient follow-up. Our data are comparable to those of Condé [5], who reported 61.98% of hospitalization versus 38.2% of outpatient follow-up.

Paranoid psychosis is a psychosis of chronic evolution whose prevalence is not negligible in a psychiatric environment in Guinea. Without being able to provide a scientific explanation, Malinkés from Upper Guinea were more represented in our study. This finding opens the way for a socio-anthropological and ethno-psychiatric study. As described in the literature, the clinical manifestations were dominated by hypertrophy of the ego, mistrust, falsity of judgment and bad social relation in the different types of personality (paranoid fighting, desire and sensory). Their treatment was essentially based on the combination of neuroleptics (incisors and sedatives) or neuroleptics and antidepressants in the sensory forms. However, a prospective study would be necessary to appreciate the extent of this pathology and to improve its management. 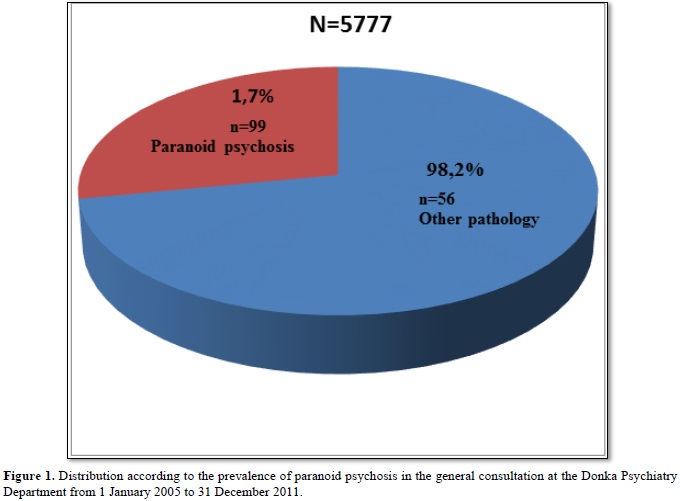 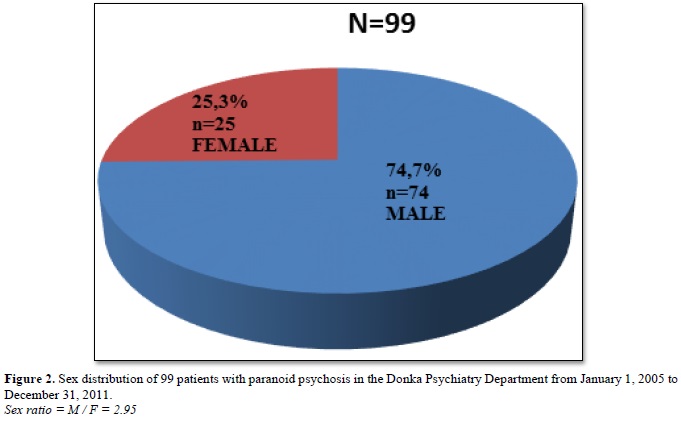