Age as a Progression Factor of Alveolar Bone Loss in Rats

Copyrights: ©2022 de Carvalho C, Ramos DA, Ferreira O, do Nascimento KB & Rodrigues VA. This is an open-access article distributed under the terms of the Creative Commons Attribution License, which permits unrestricted use, distribution, and reproduction in any medium, provided the original author and source are credited.

Objective: The aim of this study was to evaluate the presence and progression of loss of periodontal bone support (PBS) in male rats as a function of age.

Materials and Methods: The animals were reproduced and kept in the institution vivarium under controlled conditions and standard diet. Seventeen male Wister rats were evaluated totaling 34 hemi-mandible pieces, divided into three groups according to their age: group 1 (6 months) n = 12; group 2 (12 months) n = 14 and group 3 (18 months) n = 8. Bone loss was assessed by means of digitized radiographs. Three points were considered in the selected molar: the distal root Apex, distal cusp tip and the bone defect fundus. The results were statistically analyzed using mean () and standard error (SE), followed by the TUKEY test.

Results: Comparison of the observed indices showed significant difference of bone loss between groups 1 and 3 and between 2 and 3. Comparing groups 1 and 2 no significant changes were found.

Conclusion: This study showed that age was determining factor for the progression of bone loss in the animals studied.

The population aging process is a worldwide phenomenon [1]. International organizations predict that, in 2025, there will be 1.2 billion people over the age of 60, with older elderly people aged 80 or over constituting an age group of significant numerical importance [2]. Aging is characterized as a dynamic, progressive and irreversible process, closely linked to biological, psychological and social factors [3]. The improvement in living conditions, progress in health care and the implementation of public health measures have been considered the main causes for the demographic growth of this age group. However, this situation has also led to an increase in diseases associated with aging, disabling conditions and chronic diseases [4,5]. In the aging process, changes in orofacial structures occur due to the deterioration of physiological processes and cellular functions, also leading to anatomical changes. These changes can be related to aging and can be related to diseases, or be the combination of both [2].Bone is a living and dynamic tissue which undergoes remodeling throughout the life of the organism. Its main component is hydroxyapatite that corresponds to about 60% of its gross weight [6].In the course of aging, bone loss varies from one individual to another; as the remodeling process, which consists of resorption and new formation of bone trabeculae, can be modulate by factors such as diet, drugs and hormones, in addition to aging [6-10].The physiological process of normal bone remodeling consists of the balance between bone resorption and bone neoformation. During the aging process, there is an imbalance in this process, with resorption predominating over the new bone formation, culminating in bone loss [11].To understand what factors are associated with loss of alveolar bone, Huttner [12] analyzed the effect of human aging on periodontal tissues and observed that the changes in these tissues are due to molecular changes in cells and that they are related to the intensity of bone loss in the elderly. They concluded that this bone loss may be related to changes in the differentiation and proliferation of osteoblasts and osteoclasts, secretion of cytokines involved in the bone resorption process and endocrine changes commonly found in elderly individuals.In addition to human studies, several studies have been carried out in experimental humans using animal models [13-15]. Therefore, the objective of this work was to show periodontal bone support in naturally aged Wistar rats not showing systemic or oral diseases.

This is an experimental study performed on an animal model in rats, with randomized samples, blinding and examiner calibration and comparison of groups. In the present study, 17 adults male Wistar rats (Rattus norvegicus) were used, aged 6 (n = 6), 12 (n = 7) and 18 (n = 4) months, supplied and kept in the institutional vivarium. Animals suffering from periodontal disease were not included in the study. Throughout the period all animals were monitored for systemic and oral health. The experimental protocols proposed in this study are in accordance with that established by the Brazilian College of Animal Experimentation-COBEA and were approved by the Ethics Committee on Animal Experimentation - FUNVIC.

These animals were divided into three groups according to age kept each group in a polypropylene housing box (60x50x22 cm) at a controlled temperature (22 ± 2°C), in a 12-hour controlled light regime. The three groups were offered a solid routine diet with commercial feed Nuvilab CR-1 (Nuvital®, Dois Vizinhos-PR) and water ad libitum.The animals in each batch had their deaths induced by anesthetic deepening with 0.2 ml / 100 g of live weight of a 1: 1 solution of 2% xilasine hydrochloride and 10% ketamine hydrochloride and necropsied to remove the mandibles.

After being collected, the mandibles were carefully dissected by means of a procedure that included immersion in sodium hypochlorite solution for one hour and dissected with mechanical removal of all remaining soft tissue [14].The right and left mandibles were radiographed by the X-ray machine Gnatus Equipamentos Médico-odontológico LTDA TIMEX 70E WALL 220V + 4% - 60 HZ, with an exposure time of 0.64s. The images were captured using the Soredex Digora 2.1.2 program. The digital radiological sensor was fixed on a table and the cylinder was positioned at a focal distance of 30 cm, the hemimandibles, with the vestibular face facing the x-ray cylinder. The pieces were fixed with the aid of utility wax. The sensor showed a parallel relationship with the free faces of the teeth and a perpendicular relationship with the occlusal faces. And to measure the percentage of periodontal bone support (PPBS) in the interproximal region, the program ImageJ 1.52a was used. The PBS values were obtained using the formula: PBS = AB ÷ ACx100 (Figure 1) [14].

On statistical analysis, mean (), standard error (SE), minimal (Min) and maximal (Max) values were calculated; t-test (p) was used to test differences in the means () between the three age groups followed by the TUKEY test, with a significance level of 5%.

One day before euthanasia, each animal had its oral cavity evaluated and no periodontal disease was found. 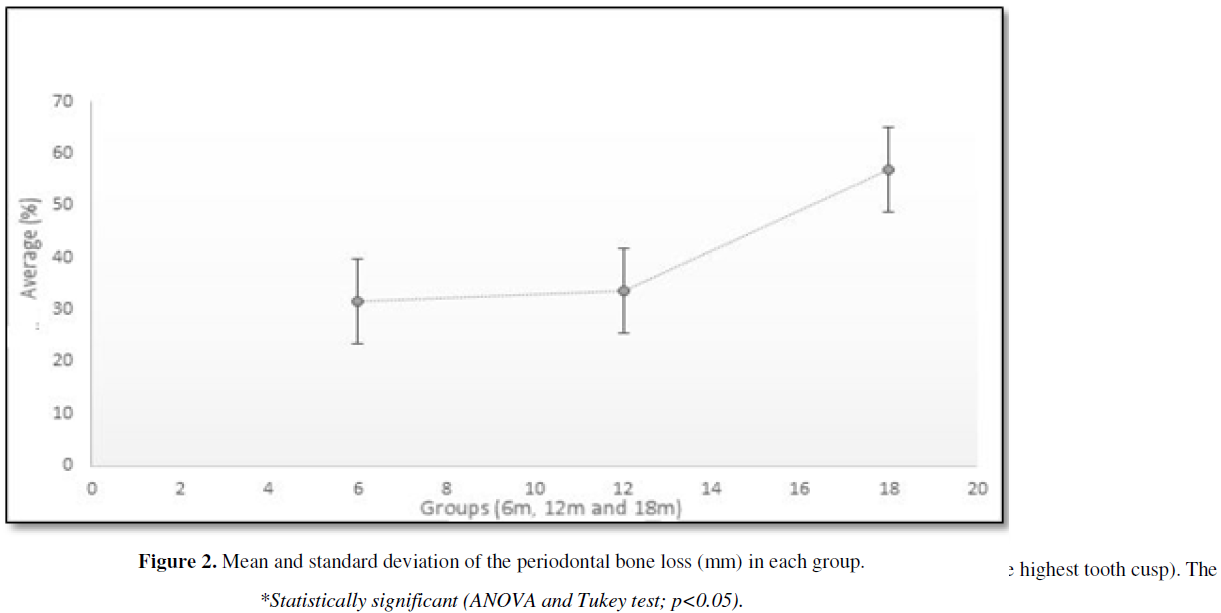 The loss of periodontal bone support may be associated with age [17,18]. Epidemiological studies of periodontal health have revealed that in a healthy adult, the age alone does not lead to a critical loss of periodontal support, although moderate loss of alveolar bone is common in the elderly [19]. However, we still cannot affirm this involvement, due to the difficulty of carrying out studies in humans, because there are several confounding factors. Thus, an alternative to assess these conditions is to conduct studies in rats in a controlled manner. It is known that the physiological conditions are very close to that of humans, justifying the choice of this experimental model [20-22].

Some studies relate bone loss to imbalance in the bone remodeling process, where resorption prevails over bone neoformation. These, also evaluated that there is bone loss in volume, density and height of the alveolar crest. Some risk factors are associated with this bone loss; however, studies highlight the chronic inflammatory process as a predominant factor [7,9-11,20-22]. In this study, no gingival inflammatory process was observed. Huttner [12] studied the effect of aging on periodontal tissues. They concluded that aging alone does not cause a significant loss of alveolar bone in healthy elderly people, but rather, molecular changes such as changes in bone cell differentiation and proliferation, in the secretion of chemical molecules involved in bone resorption and endocrine changes may be related to bone loss. Corroborating these findings, Laurent [9] suggested that with aging there is a reduction in bone mass and a degeneration of bone tissue microarchitecture, predisposing to loss of alveolar bone. Ruquet [18] analyzed the possible association of coronary heart disease and or severe vascular disease with alveolar bone loss and aging. They concluded that there is a statistically significant relationship between cardiovascular disease and alveolar bone loss in elderly individuals [18].The present study evaluated the presence and progression of loss of periodontal bone support in male rats as a function of age, showing a significant difference between the loss observed in animals aged 6 months when compared to animals aged 18 months and in animals aged 12 months when compared to the 18-month group. But there was no significant variation between 6 and 12 months. This observation suggests that the implantation of the loss occurs with the onset of aging and then continues. Alveolar conditions are one of the dental changes that is associated with the process of aging [17] Alveolar resorption as a process of physiological involution is difficult to distinguish from alveolar resorption as a pathophysiological process of infection, inflammation and destruction of damaged periodontium [10-16]. For this reason, it was important to monitor the animals' oral cavity throughout the experiment.

The present finds demonstrate that aging can induce alveolar bone loss in rats in the absence of any other factor inducing periodontal disease.