Copyrights: ©2022 Indrapriyadharshini G, Vishnuprasad S, Karthikeyan GR, Mahesh J & Ravishankar S. This is an open-access article distributed under the terms of the Creative Commons Attribution License, which permits unrestricted use, distribution, and reproduction in any medium, provided the original author and source are credited.

Materials and Methods: A cross-sectional study was conducted for 3 months (from May 2021 to July 2021) among 200 gypsy geriatric populations in the Chengalpattu district, Tamil Nadu, India. A questionnaire for assessing the nutritional status gypsy geriatric population using the Mini nutritional assessment tool and clinical examination for assessing dental caries, and the presence of edentulism. To find the significance in categorical data Chi-Square test was used. In the above statistical tools, the probability value of 0.05 is considered a significant level. Statistical tests for correlation (Spearman) were used to verify the relationship between the independent and dependent variables of this study.

The Narikuravar is a semi-nomadic tribe, originating from North India, who migrated to South India half a millennium ago, according to the group’s oral history. Although they currently spill over state borders, a large part of the population comprised of 8,500 families, or 30,000 individuals, live in Tamil Nadu and represents less than 0.1% of the state’s population. The Narikuravars are a “gypsy”, a seminomadic community that spills across borders, but mainly lives in Tamil Nadu, India. They are known to face discrimination that translates into low education levels, low socioeconomic status, and lack of appropriate access to health care [1].

Gypsies and Travelers (variously described as Gypsies) are the most disadvantaged, minority ethnic groups, who often experience stigma, discrimination, and social exclusion and show the most marked health inequality [2]. Gypsy/Travelers are vulnerable to poor health outcomes, even when compared to other disadvantaged groups including poor living conditions, high rates of homelessness, low educational achievement, social exclusion, and widespread prejudice and discrimination. Gypsy/Travelers also face many barriers to accessing healthcare. For some, a mobile lifestyle is key, however, poor access is also experienced by settled Gypsy/Travelers. This is underpinned by complex factors including stigmatization and lack of understanding by healthcare staff [3].

India has acquired the label of an aging nation with the elderly population currently being over 77 million. The rapid graying of the population comes with several difficulties in terms of general and oral health [4,5]. Conversely, elderly patients are more susceptible to oral conditions due to age-related systemic diseases and functional changes. A recent study of older adults at risk of malnutrition found that patients who reported moderately declining oral health had a 14% malnutrition rate, while those reporting poor oral health had a 20% malnutrition rate [6].

The Mini Nutritional Assessment (MNA) is the most widely used tool for nutritional screening and assessment due to its ease of use in any care setting. The MNA was developed and validated for use in older adults and incorporates anthropometric assessment, functionality, cognition/depression, dietary assessment, and self-perception of health and nutritional status. MNA has been validated in many care settings (independent living, long-term care, and acute care [7]. It is based on anthropometric measurements, a global assessment of general health status, a dietary questionnaire, and a subjective assessment (self-perception) of health and nutrition. Several studies have used this index to assess malnutrition among the elderly [8].

Subjects, design, and location of the study

A cross-sectional epidemiological study was conducted for 3 months (from May 2021 to July 2021) among 200 gypsy geriatric populations living in the Chengalpattu district of Tamil Nadu, India. It was a Fieldwork under the Department of Public Health Dentistry, Karpaga Vinayaga Institute of dental sciences, Chengalpattu. The planning of this study was based on the guidelines of the Strengthening the Reporting of Observational Studies in Epidemiology (STROBE initiative). A convenience sampling method was used to recruit the participants.

The nutritional status assessment was done by Mini Nutritional Assessment (MNA tool). This MNA tool is composed of 5 domains which include declined food intake, weight loss, suffering the acute disease for the past 3 months, and also regarding mobility, neuropsychological problems, and Body Mass Index (BMI). MNA was calculated according to their perception and then calculated [11]. The scoring standard is as follows: 24-30 points indicate good nutrition; 23.5-17.0 points have the risk of malnutrition; 17.0 points or fewer indicate malnutrition. MNA is recommended internationally as a screening tool for malnutrition in older inpatients MNA has high sensitivity (97.9-100%) and specificity (69.5-100%) [12].

Information regarding demographic details, deleterious habits, and data on oral health status was examined by recording dental caries [Yes/No]. Data about the use and need of dentures, and the type of edentulism (partial or total) were also collected by the examiner and the recorders, who were trained and calibrated to record the details under staff supervision to prevent any diagnostic variability during the oral examination. The intra examiner variability was found to be more than 0.84 by kappa statistics. The information was recorded by a recorder in the proforma who was sitting close to the examiner.

The data were initially compiled in a Microsoft Excel spreadsheet, the data analysis was done with the Statistical Package for the Social Sciences for Windows version 20.0 software (IBM, Chicago Inc., IL, USA). To describe the data descriptive statistics frequency analysis, and percentage analysis was used for categorical variables, and the mean & Standard Deviation were used for continuous variables. To find the significance in categorical data Chi-Square test was used. In the above statistical tools, the probability value of 0.05 is considered a significant level. Statistical tests for correlation (Spearman) were used to verify the relationship between the independent and dependent variables of this study, considering a 5% level of significance.

Table 1 shows the statistically significant difference in Mini nutritional assessment (MNA) in people who suffered psychological stress or acute disease in the past 3 months and daily mobility around their area of the gypsy elderly population between males and females.

The distribution of the study participants by the Mini nutritional assessment (MNA) is shown in Table 1. The study findings showed a statistically significant difference in Mini nutritional assessment (MNA) scores between male and female gypsy geriatric populations in terms of, weight loss, suffering the acute disease for the past 3 months, and also regarding mobility, neuropsychological problems [P = 0.022,0.005,0,011,0.005 respectively].

Table 2 shows the scoring criteria of the mini nutritional assessment of the gypsy geriatric population. Nearly half of the total population (46.1%) were at risk for malnutrition according to MNA, of which 40.4% were male and 52.4% were female. About 12.4% were judged as being malnourished, of which 6.4% were male and 19.0% were female. There was a statistically significant difference between the geriatric groups (male and female) with a P-value of 0.031.

Findings with respect to the correlation between MNA scores and outcome variables [ Dental caries, need for dentures, and type of edentulism], showed no statistically significant difference found between males and females gypsy geriatric population (Table 4).

In India, 104 million tribal people reside, constituting 8.6% of the total Indian population. It is estimated that about 30,000 Narikuravars live in Tamil Nadu [13]. Health care access for the most vulnerable of India’s population, such as the marginalized, impoverished Narikuravar “Gypsy”, has been a constant preoccupation for scholars, activists, international organizations, and policymakers for more than a decade [14]. Tribal population in India similar to other underprivileged groups have their reasonable number of distress and often they are hidden and unnoticed from the “mainstream” India. The death rate, diseased state, and malnourishment are more common among the indigenous population when compared with the average Indian population [15]. The present study provided important insights regarding the nutritional status and oral health among the gypsy geriatric population. 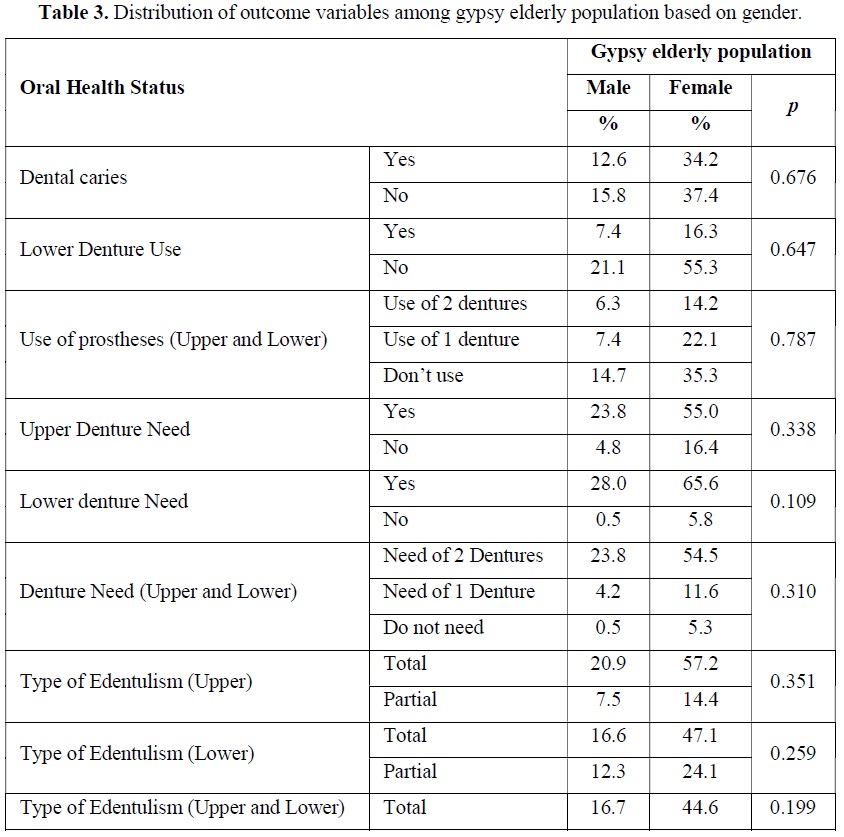 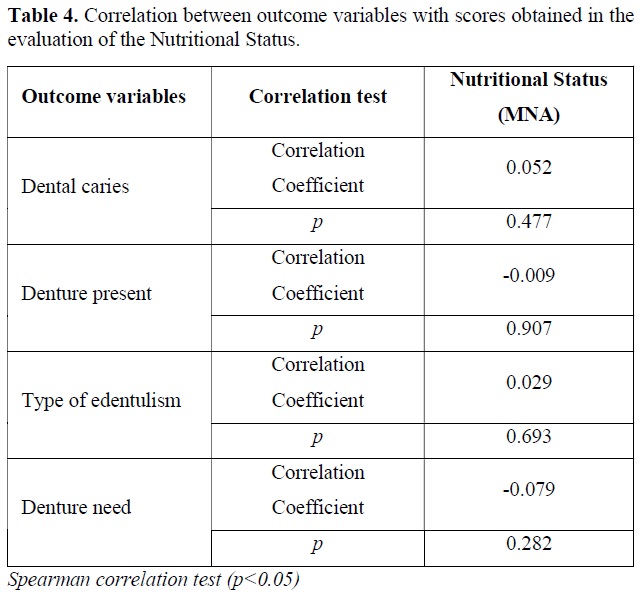 The findings of this study revealed that 34.2% of the female gypsy geriatric population experienced dental caries and higher than males (12.6%). This is in accordance with the study done by Neelamana [5] found that the prevalence of dental caries was 30.7% among elderly tribes. This indicates a lack of accessibility, availability, and affordability to dental health care facilities among the tribal population.

In the current study, nearly half (44.6%) of the female geriatric population had edentulism in both upper and lower arches. This is in line with the previous study by Neelamana [5], complete tooth loss was observed in 42.9% of the elderly tribal population. The female gypsy geriatric population tended to have a higher number of missing teeth than males, which might influence the higher percentage (52.4%) of risk of malnutritional status in females than males. It should be acknowledged from the current study that tooth loss negatively impacts general health and is a risk factor for malnutrition.

About 54.5% of the female geriatric population needed both dentures. This may be due to poor access to oral health care and inequalities in the distribution of the oral care workforce and also due to unawareness [5]. In lieu of the above-mentioned facts, the gypsy geriatric population is discriminated against when it comes to availing of regular health services [17].

The study reveals poor oral health was seen among the gypsy (Narikuravar) geriatric tribes.  The risk of malnutrition is higher with the increasing prevalence of edentulism among the study population.

The study researched and reflected upon a small, understudied group of people, and concluded that poor oral health status exists and the risk of malnutrition is high among the gypsy geriatric population. The study findings reflect a strong concern with the other populations in which cultural or ethnic differences are problematized and reified. The study hopes to springboard future research and a conversation about how to make oral health access more equitable and provide this vulnerable group its right to health.

In the first place, to the design of the research, does not allow extrapolation (generalizability) due to the lack of external validity. By the very nature of the marginalization and discrimination experienced by Gypsy/Travelers in Indian society, it is likely that recruitment to our study was highly challenging and required multiple approaches to recruit those who are most vulnerable e.g., those who do not engage with civil society organizations and/or those living in unauthorized encampments. Despite these caveats, our study will add to the evidence-based works of marginalized populations and mainstream health services.

The present work researched and reflected upon a small group of people, aiming to provide the oral health status of the gypsy elderly population. Upon finalizing this research, we have a few recommendations.

First, there is a need for consistent and constant attention to oral health issues for marginalized communities (Narikuravars), and further research on oral health habits and cultural barriers in accessing health care within nomadic groups is recommended.

Second, both qualitative and quantitative research with the community is needed to integrate and compare it with other similar communities and the population at large to address the oral health inequality.