Copyrights: ©2022 Charfi N, Aguir S, Ouni M, Bekri S, Bibi R, et al. This is an open-access article distributed under the terms of the Creative Commons Attribution License, which permits unrestricted use, distribution, and reproduction in any medium, provided the original author and source are credited.

Ectodermal dysplasia is a hereditary disorder. Patients with ectodermal dysplasia are characterized by hypoplasia or aplasia of embryonic ectodermally-derived organs including teeth, nails, hair and sweat glands. According to the state of sweat glands involvement, two major groups are distinguished: hypohidrotic or anhydrotic. Oral findings in patients with ectodermal dysplasia (ED) include markedly reduction in number of teeth (oligodontia or hypodontia), malformed and widely spaced conical-shaped teeth, and underdeveloped alveolar ridges. Other dominant clinical features can be found like very thin hair.

In an autosomal genetic trait or the hypohidrotic syndrome (also known as Clouston syndrome), the disorder is fully expressed in both males and females. Many individuals with hypohidrotic ectodermal dysplasia have additional, characteristic facial symptoms which are apparent at birth such as frontal bossing, saddle nose and malar hypoplasia [3].

The ectodermal dysplasia is characterized by a clinical trial of hypotrichosis, hypo-, oligo- or anodontia, and hypo- or anhidrosis [4].

The eccrine glands (salivary, lacrimal, sebaceous, submucosal, Meibomian, and mammary glands) may be either absent, reduced in number, or nonfunctioning (hypohidrotic) [5].

For these patients, the appearance of their teeth is extremely important since it can affect their self-esteem. Psychosocial and physiological reasons mandate providing dental care for patients at an early age.

A 12-year-old male patient with HED was referred to the Department of dental medicine of Charles Nicolle’s hospital with esthetic complaints and inability to eat properly. The patient is comprehensively cared for in close cooperation with the department of genetic.

At the anamnesis, patient’s medical history and the family tree were recalled by his mother (Figure 1). The patient suffered frequently from high fever and dried skin, he was intolerant to heat and did not sweat. His intelligence was normal. The child was born of nonconsanguineous marriage. The mother reported that she had a youngest son with similar presentations but her two daughters were normal. 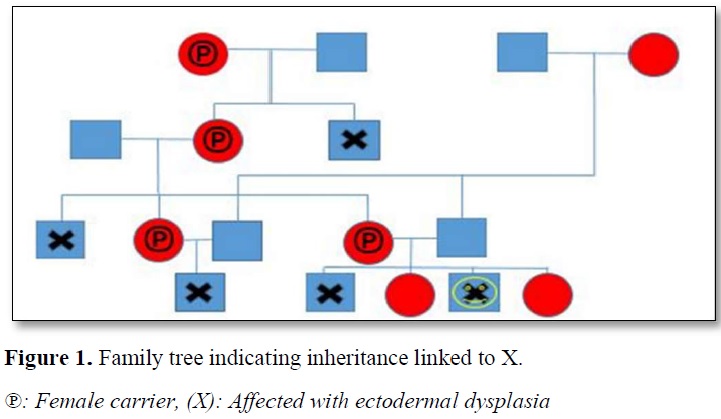 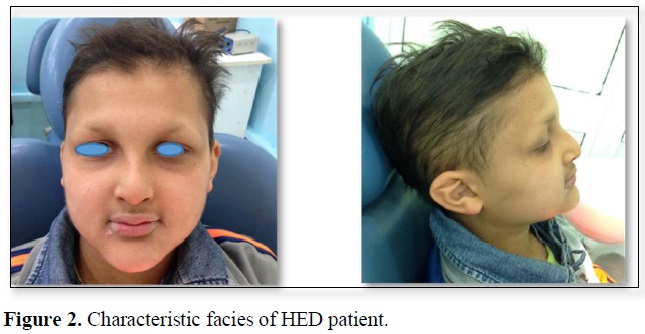 Oral examination revealed bone atrophy of alveolar ridge in both jaws and delayed eruption of permanent dentition (Figure 3). The 13, 23 and 43 pierced the mucosa. 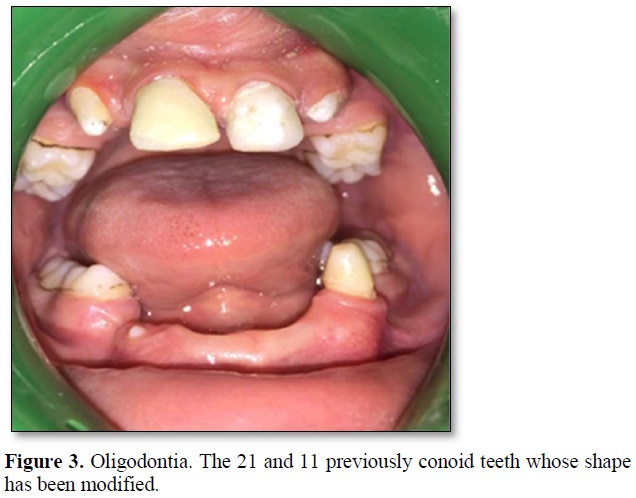 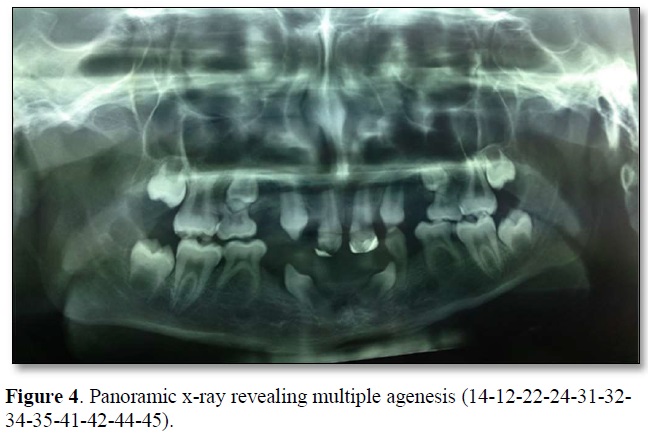 The study casts showed right and left class I molars and decreased prosthetic occlusal height (Figure 5). The models were later used for the wax up (Figure 6). The morphology of upper incisors was improved with composite resin and a preformed pedodontics cap. 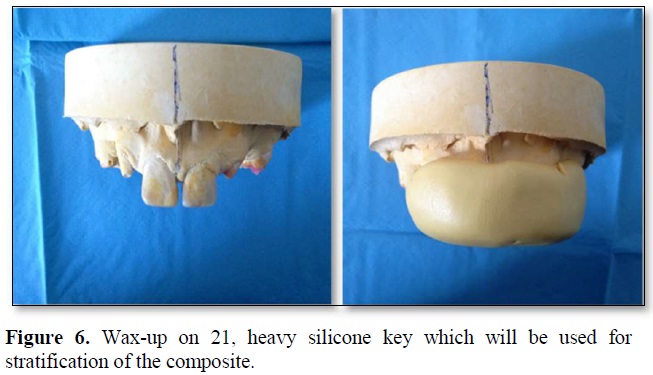 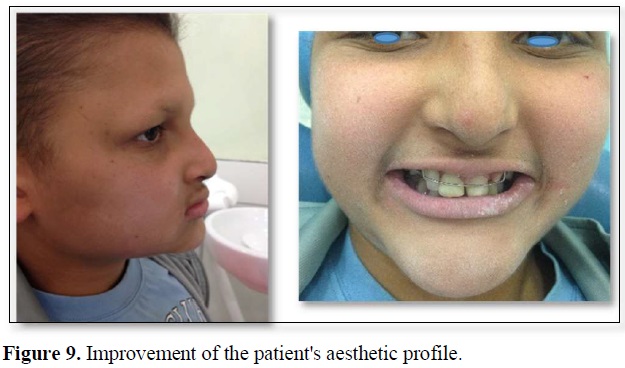 Oral hygiene instructions for the dentures like maintaining a soft diet for few days and removing the dentures at night for promoting the healing of the oral soft tissue, were given to both the child and his mother. Periodic follow-up was advised for activating the screw, modification or replacement of the dentures taking into consideration the patient’s developing maxillary and mandibular ridge.

A 16-year-old girl presented with the chief complaint of defective old removable prostheses and lack of esthetics.

The clinical examination reveals sparsely distributed scalp hair, eyes wide apart and sunken in their sockets, the lips are thick with an apparent protrusion of the chin and a dry skin (Figure 10). 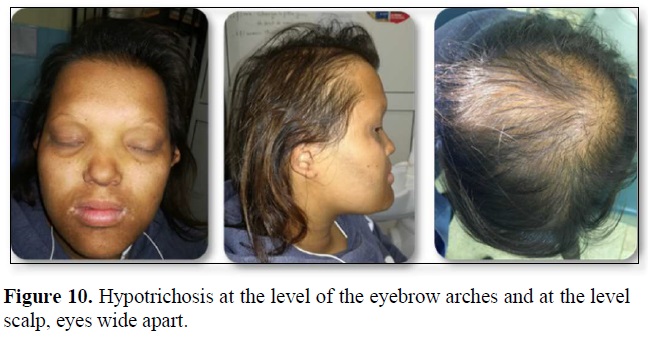 Panoramic radiograph showed presence of 11, 21,16,26,27 and 37 with complete root formation and there wasn’t o evidence of any impacted tooth. The patient was not able to sweat and stated that there was no production of tears. Nobody in the patient’s family had similar condition and she was born of non-consanguineous marriage.

Removable partial dentures were considered as the treatment option for this patient. Prior to impression making, composite buildup of the conical maxillary anterior teeth was done (Figures 11-14). Primary impressions were made with alginate, then individual trays were made. 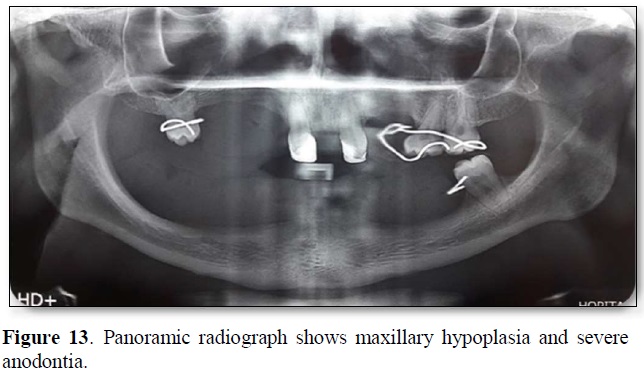 As functional impression we chose a composed impression (two materials with different textures). Modeling and marginal closure were made with thermoplastic material (green Kerr).

The final imprint was made with polysulfide material.

Acrylic bases with occlusal wax rims are made on the master casts for establishing maxilla-mandibular relations (Figure 15), and the master casts were mounted on an articulator. The teeth were arranged according to a balanced occlusal. After

testing the wax master casts, polymerization was done. The Clinical adaptation and occlusal equilibration of the finished dental prosthesis were done (Figures 16 & 17). Future visits are scheduled for 6 months to make necessary adjustments and for denture relining. 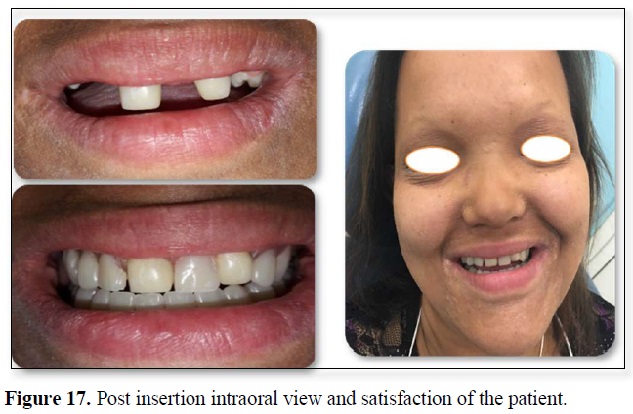 In most cases, HED is diagnosed during early childhood when characteristic dental and hair abnormalities become apparent and prompt further testing. Specialized diagnostic testing may include sweat testing with pilocarpine to determine the reduction or absence of perspiration. The final diagnosis can be clarified through genetic tests that will show mutations in the EDA, EDAR, and EDARADD genes [6]. Mutation in these genes results in defective ectodysplasin A formation, thereby preventing normal interactions between the ectoderm and the mesoderm and, hence, impairing the normal development of hair, sweat glands, and teeth [7].

Hypodontia affect the primary and permanent dentition with a higher incidence in the mandible. In the primary dentition, maxillary second molars, canines, central incisors, and mandibular canines are the teeth most commonly present [8]. In some cases, the child may present total agenesis in the deciduous and permanent dentition. When teeth are absent, the alveolar ridges are often underdeveloped. Lack of alveolar bone and teeth can result in a narrow, pointed chin. Missing teeth and lack of alveolar bone can also cause speech problems and difficulty with chewing and swallowing.

Hand wrist radiograph is recommended to assess the skeletal development of the patient. This will influence the selection of the appliances (implant therapy, fixed or removable dentures) and it seems to be a great value in planning efficient prosthodontic therapy [9]. Removable partial denture is commonly used in the treatment to provide immediate aesthetic results, reestablish the occlusion by replacing missing teeth and allow the practician to monitor bone growth. The treatment can be start at the age 3 to 4 years for cooperative children. Early dentures can lead to significant improvements in appearance, speech, and masticatory function. The positive changes increase the self-confidence of the children, as described by the psychologists who were part of the treatment team, and the speech definitely improved, according to the speech therapist [10].

Both types of self-curing and thermosetting acrylic resins offer sufficient strength and good adhesion for pediatric prostheses [11]. The base plate must have a maximum coverage, avoiding the brakes and muscle insertions. Lateral and anteroposterior stabilization are ensured by the vestibular coverage of the edentulous sectors. The retention is more difficult to achieve: the 6-year-old tooth does not allow retention until around 10 years of age after reaching the occlusal plane [12]. For prosthetic tooth mounting, the teeth meet the occlusal requirements of the child's arch, such as the absence of a compensation curve. The diastemas must be respected. The occlusion should be in harmony with the patient’s occlusion; generally, an occlusal scheme utilizing linear occlusion is recommended to preserve the existing teeth and to create freedom of movement [13].

Flexible dentures with acetal resins have been used as an alternative to metal clasp to improve esthetic and for the good biocompatibility of the thermoplastic materials due to the absence of monomer, light weight, and preventing accidental fractures [14].

Bambino teeth are temporary prosthetic teeth which are suitable for the production of partial dentures for children. The shade must be chosen according to the child’s complexion. Because even temporary dentitions can differ considerably in morphology (and color), in some cases it may be appropriate to modify adult prosthetic teeth by grinding to suit the morphology of the primary teeth.

Fixed prosthesis can’t be proposed for patient in growth period, because it can interfere with jaw growth due to rigid connectors if the prosthesis crosses the midline.

While in the present cases, the remaining anterior teeth, due to their atypical conical shape were reconstituted with composite, some authors suggest to exploit them as abutments for overdentures as the conical morphology not be suitable to stabilize removable partial denture [15]. The use of neutral zone technique, can be advantageous, it will ensure that the muscular forces aid in the retention and stability of the denture rather than dislodging the denture during function.

Concerning implant use, some authors, implants placed in patients during the time of maxillary growth, determined as being up to 15 years of age can cause several problems like the implant prosthesis being submerged and acting like an ankylosed tooth, restrictions on skeletal craniofacial growth and trauma to tooth buds [16]. Other studies show that the mandibular anterior region is the best site for implant placement before skeletal maturation. In fact, this area shows the least variation in growth. The closure of the symphyseal suture begins in the first 2 years of life and transverse growth is completed before the age of 6 years [17]. The restoration of a natural and pleasing appearance is important for the normal psychological development of HED children. The French National Authority for Health concede implant therapy in the mandibular anterior region mandibular anterior region from the age of 6 in children with anodontia in case of prosthetic failure or intolerance to conventional pediatric prostheses. On the other hand, the placement of implants is excluded in the maxilla [18]. In children aged six to fourteen years, mandibular implant survival times of one up to 26 years were reported. It seems to be favorable in terms of food intake, development of speech, and socialization when early prosthetic treatment at less than 5 years of age [19].

Bar-retained mandibular removable prosthesis supported by two implants are unsuitable for early implant treatments. According to the High Authority of Health, they are too rigid and increase the risk of restriction of mandibular skeletal growth [20].

Therefore, a successful management in such cases with ectodermal dysplasia appeals to a multidisciplinary treatment plan involving pedodentist, orthodontist, prosthodontist, and an oral-maxillofacial surgeon for complete restoration of oral function. However psychological development of the child and the emotional effects should also be considered in therapeutic planning.

As the dentist is the first to meet the child in most cases, a depth knowledge about the characteristics facial and oral features of ectodermal dysplasia is primordial and understanding of the treatment modalities is essential from the clinicians.

In child patients and adolescents with HED, removable partial dentures provide the most logical reversible treatment option that enhances esthetics and function without threatening an already compromised dentition.