Stereomicroscopic Evaluation of Implant Healing in Over-Prepared Sites without Primary Stability and Grafted with a Combination of FDBA, Β-TCP and Silicate Cement

Copyrights: ©2021 Moeintaghavi A, Sargolzaie N, Shiezadeh F, Khajavi A, Khodadadifard L, et al. This is an open-access article distributed under the terms of the Creative Commons Attribution License, which permits unrestricted use, distribution, and reproduction in any medium, provided the original author and source are credited.

Objectives: The aim of our study was to evaluate the bone to implant contact ratio (BIC) around the implants without primary stability using FDBA, β-TCP and silicate cement.

Material and Methods: In our study, three dogs were selected. The second premolar at each site of the mandible was extracted. In each dog, one site was selected randomly as the control site (G1), and immediate implantation was done with a standard primary stability. In three other sites, an oversized osteotomy was performed, and then the sites were randomized to receive either an implant with zero torque and secured with βTCP and FDBA (G2) or secured with βTCP, FDBA and silicate cement (G3).

Four months after surgery, Individual bone blocks containing of implants were harvested. After dissection, specimens were evaluated using a stereomicroscope (Olympus, Japan). The mean bone to implant contact (BIC) was measured and compared between groups by ANOVA.

Results: Two implants were not successfully osseointegrated. One of them failed in the G2 group and the other was in the G3 group. The mean BICs in the G1, G2, and G3 groups were 30.6%, 60.7%, and 72%, respectively. The results of ANOVA showed that BIC was not significantly different between these three groups (P value = 0.08).

Conclusions: According to our findings, the absence of primary stability when we used graft materials did not increase the failure rate in comparison to the control treatment. Another finding was that the amount of BIC in implants without primary stability was not significantly different from that in stable implants.

All animal procedures followed the standards of the Association for Assessment and Accreditation of Laboratory Animal Care and the Institutional Ethical Animal Care Committee of Mashhad University of Medical Sciences. Three healthy male mongrel dogs aged 4-6 years and weighing 25-35 kg were selected for this study. Dogs were anesthetized with intravenous injection of ketamine hydrochloride 10% (5.5 mg/kg) (Alfasan, Netherlands), sodium thiopental (10 mg/kg) (Nesdonal, Specia, France), and 0.5 mg/kg diazepam (Zepadic Co, Caspian Tamin Pharmaceutical, Tehran, Iran). Then, oroendotracheal intubation was performed. Throughout the surgical procedure, inhaled O2 and intravenous Ringer’s lactate solution (Shahid Ghazi Co, Tehran, Iran) were administered. After the induction of general anesthesia, local anesthesia was applied using the injection of lidocaine 2% with epinephrine 1/80,000 (2 cc) (Daroupakhsh Co, Tehran, Iran) on each mandibular side for hemostasis. After the anesthesia was completed, sulcular incisions were made into the sulcus from the first premolar up to the first molar on both sides of the mandible. A full-thickness flap was reflected and elevated. The second premolar in each quadrant was extracted. Randomization was performed with random codes for the dogs and sockets. Each socket was randomly categorized with the code using a random number table. Then, according to the code in each dog, one site was selected randomly as the control site (G1), and immediate implantation was done with a standard torque and primary stability, such that the apical 3 mm of the implant was inserted into the bone and the stability of the implant during insertion was approximately 25-30 N·cm. without receiving any type of grafting material. A 10-mm-long and 3.7-mm-diameter implant inserted immediately in the fresh socket with the coronal margin nearly flush with buccal alveolar crest on both sides of the mandible (tapered Biohorizon®). After implant placement, a cover screw was attached to the implants manually within the socket using a dedicated screwdriver. In three other sites, an oversized osteotomy was performed.

To achieve an over-prepared site, drilling was continued up to a 4.6 mm drill. The sites were randomized to receive either an implant with zero torque and secured with βTCP: FDBA (1:1) (G2) or an immediate implant placement with zero torque and secured with βTCP, FDBA and silicate cement (G3) (Figure 1A). After placement of the implant into the socket, there was no contact between the fixture and bony wall, and a gap between the implant surface and the bone was detectable all around the fixture. The platform of the implant was placed at the level with their coronal margin almost flush with the buccal alveolar crest on both sides of the mandible (Figure 1A). At one site, the implant was inserted in the same manner, but a combination of FDBA, βTCP and silicate cement in equal proportions was used to fill the gap between the implant and the socket (Figure 1B). In each site, a periapical radiograph from the surgical site was prepared to ensure the correct placement of the implant in accordance with the mentioned protocol. At the end, an incision was made on the periosteum of the flap, and the tension-free flap was sutured by 3-0 Vicryl (Supabone®). During the postoperative period, each dog received an intramuscular injection of cefazolin 1 g every 12 h. They also received diclofenac sodium 75 mg (1 dose every 12 h for 3 days). In the first month after surgery, each animal was kept in a separate room and kept on a soft diet. After surgery, the wound of the surgical site was observed daily to evaluate possible complications. Animals were visited daily for the first week, weekly for the first month and monthly for the remaining follow-up period. Four months after surgery, the animals were anesthetized and euthanized by an overdose of pentobarbital sodium 3% IV (30 mg/kg). Then, 4% formaldehyde solution was perfused through the carotid artery. The jaws were separated, and the soft tissue was detached and kept in formaldehyde solution 10%. A bone block consisting of the implant and surrounding bone was made by a jigsaw, with no injury to the bone surface surrounding the implant, and preserved in buffered 10% formalin solution. The separated pieces were placed in molding material meticulously to be totally covered. After dissection, both sections of the specimens were evaluated using a stereomicroscope (Olympus, Japan) with magnification ranging from 10X to 20X. The photomicrographs showed the proportion of the gap between the implant and bone to the whole surface of the implant (Figure 2). The surface of the implant in contact with the bone and the surface area without bone contact were measured. The ratio of the implant surface area in contact with the bone to the total surface area of the implant was regarded as the percentage of bone-to-implant contact (BIC). The mean BIC was compared between groups by ANOVA. 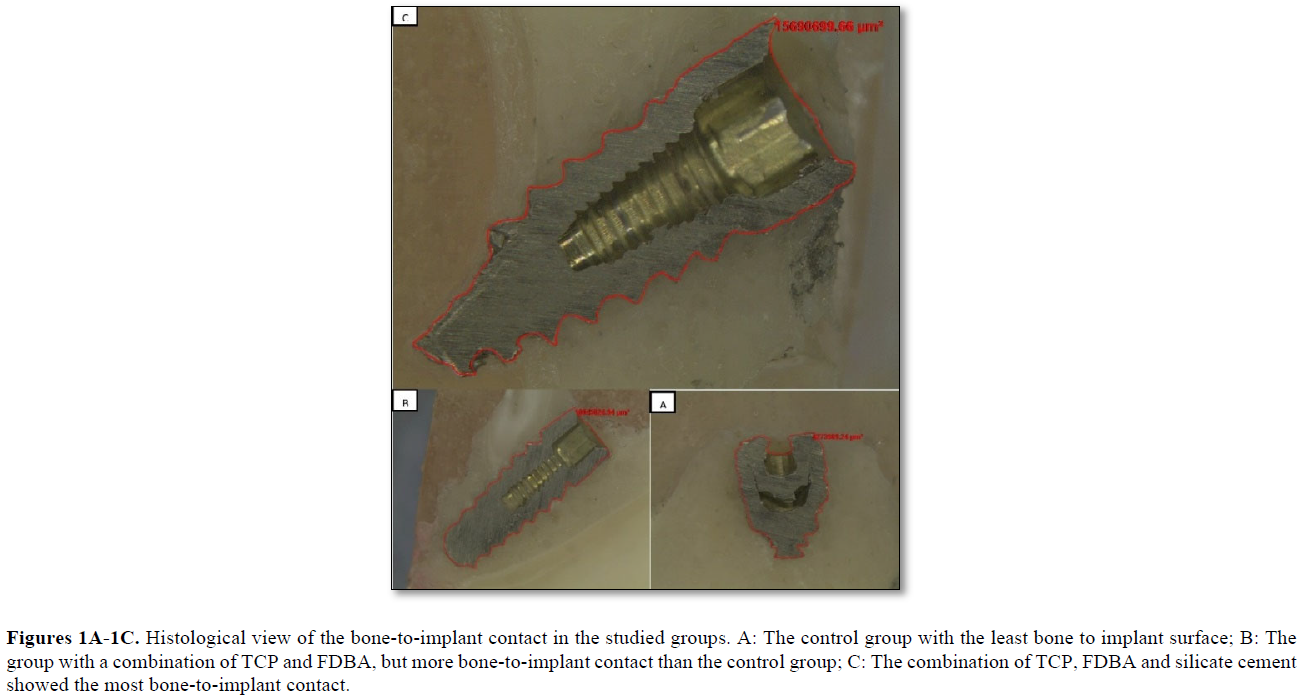 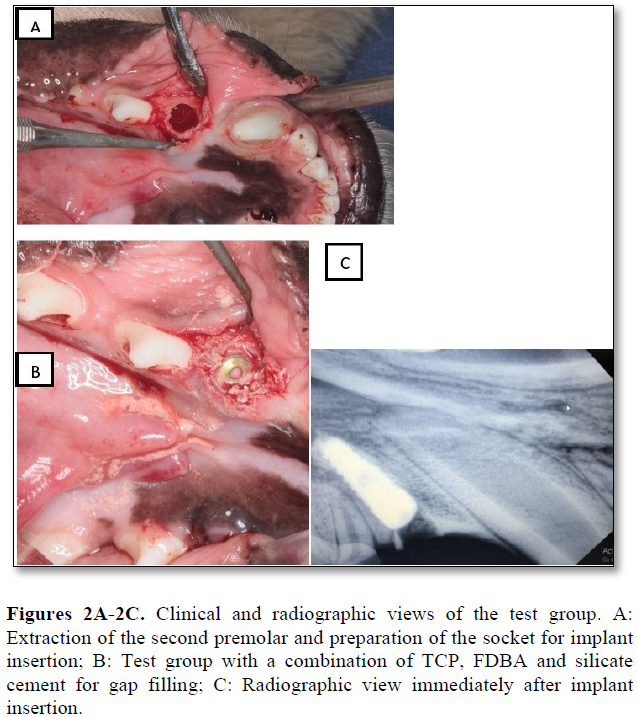 Two implants were not successfully Osseo integrated. One implant failed in the group having zero torque (G2) and secured with βTCP and FDBA, and the other failed implant was in the group having zero torque and secured with βTCP, FDBA and silicate cement (G3). The mean BICs in G1, G2, and G3 were 30.6%, 60.7%, and 72%, respectively. The results of the Kolmogorov–Smirnov test indicated that the data distribution was normal in all three groups. The ANOVA results showed that BIC was not significantly different between these three groups (P value = 0.08).

Many researchers have evaluated the effect of primary stability on osseointegration. Some authors believe that the absence of primary stability causes the micromovement of the implant and finally leads to the failure of osseointegration [6,7,28-30]. The results of some other studies showed that with surface roughness, osseointegration is possible even in the presence of micromovement. Animal [31,32] and clinical studies [33,34] have shown the successful healing of implants with low torque (≤10 N·cm). According to the findings of Rea [10] the osseointegration of implants with lower torque was not significantly different from that of implants with higher torque (≥70 N·cm). In this study, even implants with zero torque were successfully Osseo integrated. In an animal study on the tibiae of rabbits, implants with initial rotational mobility had similar osseointegration as stable implants [35]. In another animal study, the immediate displacement of implants inserted in the tibiae of rabbits was 0-90 µm. According to the findings of this study, rough implants with 90 µm displacement had higher BIC, while in implants with turned surfaces, higher BIC values were observed in implants with lower displacement [9]. Different studies have evaluated the effect of low mechanical stability on the survival and success of dental implants. In a cohort study by Cobo-Vázquez [36] the survival of implants without primary stability was evaluated. The findings after one year of follow-up showed that low primary stability did not increase failure. In a retrospective study, the osseointegration of implants without rotational primary stability was evaluated. The findings of this study showed that machined surface implants without rotational primary stability showed a higher survival rate even under immediate loading conditions [34]. Implants that are in contact with parent bone but whose threads have no frictional binding into the bone trabecula clinically do not show resistance to rotation, and they have no detectable apical or lateral movement. According to the results of this retrospective study, such implants were osseointegrated successfully. When using cylindrical implants, a small mismatch between the diameters of the implant and drilling site could lead to the absence of primary stability. Under such conditions, despite the zero torque, contact osteogenesis could improve the osseointegration and decrease the failure rate. The insertion of immediate implants by unexperienced clinicians, the over-preparation of osteotomy sites or unnecessary levels of torque and subsequent fracture of surrounding bone could cause rotational and lateral movement of implants. Under these conditions, distant osteogenesis is the main factor that will lead to successful osseointegration. So far as we know, our study is the first to evaluate the effect of the absence of both bone-to-implant contact and primary stability on the osseointegration process. According to our findings, the absence of these two factors did not increase the failure rate in comparison to the control site. Another finding was that the amount of BIC in implants without primary stability was not significantly different from that in stable implants. Even though the mean BIC in the test group was higher than that in the control group, the difference was not statistically significant. It seems that the use of biomaterials in the gap between the implant and bony wall in the test group could improve osteogenesis. In our study, in two sites of each animal, the combination of βTCP and FDBA was used, and in one site, silicate cement was added to the above combination. The hypothesis behind the use of silicate cement was that increasing the consistency of the biomaterial combination would decrease the micromovement during the healing process and reduce the failure rate. Additionally, several studies have shown the effect of silicate cement on the improvement of osteogenesis because of the increased pH the healing site. In our study, the combination of βTCP, FDBA and silicate cement did not decrease the failure rate and increased the BIC in comparison to the use of only βTCP and FDBA.