Copyrights: ©2021 Watted A, Awadi O, Watted N & Abu-Hussein M. This is an open-access article distributed under the terms of the Creative Commons Attribution License, which permits unrestricted use, distribution, and reproduction in any medium, provided the original author and source are credited.

The maxillary permanent central incisor develops early in life and forms part of an aesthetic smile. Disruption of the formation or eruption of the permanent central incisor has multiple etiological factors. Treatment options depend to some extent on the cause of failure of eruption of the central incisor. Generally, the earlier treatment is provided, the higher the likelihood of success and the less the complexity. Our results suggest that close monitoring and interdisciplinary cooperation during the treatment phases led to a successful esthetic result, with good periodontal health and functional occlusion.

This paper presents a case with a deeply impacted maxillary left incisor that was managed by combined orthodontic - surgical technique.

The term impaction is of Latin origin coming from the term “impactus” which means “wedged or packed in together” [1]. Impacted tooth is defined as tooth whose roots are 2/3rd or fully developed but nevertheless expected to erupt. In impacted teeth, root development might have finished, but unaided eruption is not expected to occur [2]. Occasionally, malposition of a permanent tooth bud can lead to eruption at a wrong place [1,2].

Impaction of maxillary central incisors (MCI) is only seldom encountered in clinical practices with a low prevalence rate of 0.06% to 0.2% [3]. The delay in eruption of the tooth more than 6 months from the contralateral central incisor and even after eruption of adjacent lateral incisor is an anomalous outcome [3,4].

Impactions are rarely diagnosed in mixed dentition period. However, central incisor impactions are an exception to this as its non- emergence can be easily noticed by parents, pediatricians and pedodontist owing to its importance in facial esthetics [2,5,6].

Successful management of impacted central incisor is really a clinical challenge for orthodontist because there are chances of failure due to ankylosis, loss of attachment, external root resorption, and root exposure after orthodontic retraction. Improper surgical technique for flap design may lead to crown lengthening and loss of attachment which is functionally and esthetically unacceptable and needs to have periodontal surgery [9-11].

This paper presents a case with a deeply impacted maxillary left incisor that was managed by combined orthodontic‑surgical technique.

A 12, 5 years old girl reported to Watted aesthetics center, Jatt, Israel, with a chief complaint of missing upper right central incisor for last 2 years. There was no significant medical history. Clinical examination revealed orthognathic facial profile and presence of good facial balance in all proportions. An intraoral examination showed the child in mixed dentition stage with erupted both upper and lower permanent incisors except upper right central incisor. On palpation a painless, hard, incompressible protuberance was felt in the labial sulcus at the mucogingival junction. Sufficient space was available for unerupted left permanent central incisor (21) in the maxilla (Figures 1A-1C). 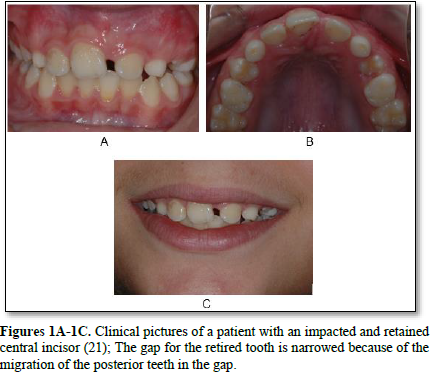 The intraoral and extraoral radiograph (Figures 2A, 2B & 3) showed that there was a mesiodesn and an ectopically placed upper right central incisor at the level of gingival 1/3rd of root of upper right lateral incisor. There was a Class-I molar relationship. The overbite and overjet were within normal limits. 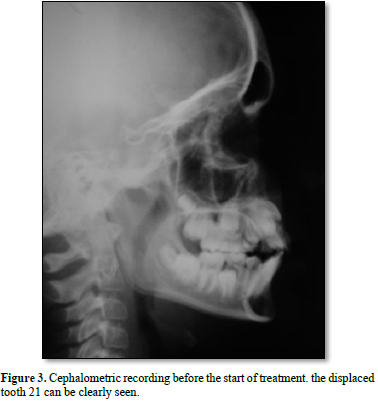 As a first step, space was opened for the displaced tooth 21. An open spring was used to open the space (Figure 4). 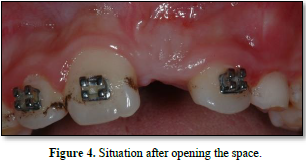 In our present case surgical exposure of crown was done with closed eruption technique. Following this orthodontic traction and for proper alignment of impacted tooth 2x4 fix appliance therapy was used. Before surgical exposure brackets were bonded to the erupted left central incisor, right and left lateral incisors. Orthodontic bands with buccal tubes were cemented onto the erupted upper permanent both first molars to gain sufficient anchorage. 0.019x0.025-inch stainless steel (SS) continuous arch wire was placed. After surgical exposure, orthodontic button was Attachment to the exposed labial surface of the impacted incisor. For the orthodontic directional tractional force 0.010 stainless steel ligature wire was ligated to the Attachment. After full flap closure the other end of the ligature wire which was coming out of the flap was passively attached to the arch wire. After healing of surgical area in about two weeks orthodontic traction force was initiated by tightening the ligature wire to the arch wire. The tightening i.e., extrusive force applied was 40-60 gm at every 3 weeks interval (Figures 5A-5C & 6). After the crown of the impacted incisor was sufficiently erupted out of the oral mucosa in about two months bracket was bonded to this tooth and 0.012 Ni Ti arch wire placed followed by 0.018, 0.025 Ni Ti wire. Finally18 x 25 SS wire were used for levelling of the teeth in the maxillary arch (Figures 7A & B). This tooth alignment takes another 3 months. 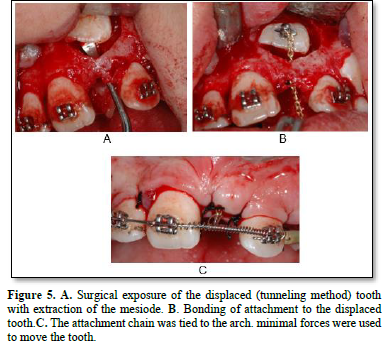 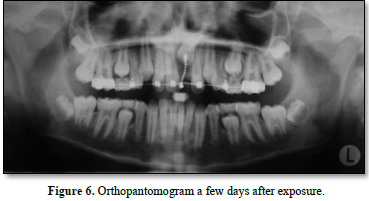 The impacted maxillary left permanent central incisor was successfully positioned into proper alignment by closed eruption technique and orthodontic traction by fixed orthodontic therapy in about five months. After complete treatment the erupted incisor presented an acceptable gingival contour and attached gingiva. After removing the fixed appliance lingual bonded retainer was placed for post alignment stability and periodontal health (Figures 8A, 8B, 9A & 9B). 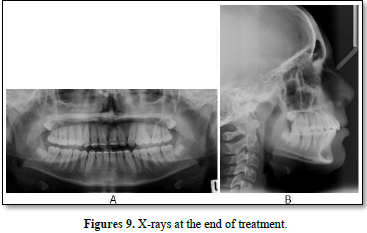 The literature showed that perfect alignment of impacted incisor can be achieved by careful treatment planning [2,8,10]. The successful management of the impacted central incisor is often a difficult task and enquires the joint expertise. Itis important that orthodontist and oral surgeon together prepare a full proof treatment plan based on scientific rationale [9,10].

Delayed eruption of maxillary incisors requires monitoring or intervention when:

When impaction of an MCI is suspected, it is essential to search for certain indications of impaction in clinical examinations namely, an asymmetrical eruption with the homologous contralateral for roughly 6 months, the alteration of the sequence or chronology of eruption, deciduous tooth retention, midline deviation, loss of space, and elevations in the soft palatine tissue or labial mucosa [12,13]. Following a careful clinical examination, it is imperative to use a complementary means of diagnosis. In all clinical cases presented, panoramic radiography and lateral tele radiography were important methods for studying the impacted MCI and general orthodontics [3,10,11].

With all the requisite information, it is possible to establish a diagnosis and elaborate a treatment plan. Once complete, the symbiosis of several medical specialties may be necessary. In response to the situation, several treatment options are available [12,14,15].

The treatment approach of impacted maxillary teeth requires the cooperation of dental specialties such as orthodontics, oral surgery, and prosthodontics. The current treatment modality, instead of extraction, is to have surgical crown exposure with the placement of an auxiliary, followed by orthodontic positioning of the tooth [17].

Root resorption was always a concern during treatment. According to Brezniak and Wasserstein [18], abnormalities in the morphology of the roots, or the time, type, and magnitude of orthodontic force can contribute towards root resorption. This case used sequential traction of the impacted teeth, repositioning of incisor into occlusion with minimal intrusive effects on anchor teeth was achieved. The rigid A. J. Wilcock stainless steel base arch wire helped to distribute the unwanted intrusive side effects over a larger cumulative root surface area, thus minimizing localized deleterious effects.

The surgical exposure for orthodontic guidance of impacted tooth must be well planned to prevent any harmful effects on the periodontium. The impacted incisor was erupted by using the closed-eruption technique [19]. It was suggested that labially impacted teeth might have a thinner plate of bone and therefore are at greater risk for attachment loss if uncovered with an apically positioned flap [19]. Vermette [22] compared these 2 surgical procedures and showed negative esthetic effects such as increased clinical crown length and gingival scarring with the apically positioned flap technique than the closed-eruption technique [21,22].

In this case maxillary central incisor was impacted at the projection level of the gingival third of the contra-lateral completely erupted central maxillary incisor so it was treated by the surgical orthodontic approach, because spontaneous eruption was not expected. Surgical exposure of crown can be performed in 3 accepted ways, which include [11]

As the tooth was present at the middle of the alveolus closed eruption technique was treatment of choice. Orthodontic button was bonded to the tooth as it is a miniature attachment it reduces the risk of fenestration [24]. After bonding and ligature wire placement flap was replaced into its original position. Controversy exists regarding the amount of time the clinician should wait to apply post-surgical orthodontic forces after exposure and bonding. Some authors recommend application of force immediately after exposure [16]. Others recommend waiting for one to two weeks [14,25]. This decision seems to be the individual preference of the clinician. Two weeks after surgical exposure, orthodontic traction was started. It has been reported that treatment of unerupted maxillary incisors with the closed-eruption technique simulates guided physiologic tooth eruption which can produce adequate attached gingiva and gingival contour with overall good long-term esthetic outcome [19].

Early diagnosis is very important and interceptive orthodontic treatment could not only improve skeletal mal relationship and eliminate functional interferences, but also may correct disturbances during the eruption [26].

The best outcome is obtained when the donor tooth root development has reached one-half to three-quarters of the final root length, although a favorable outcome has also been reported in tooth with complete root development [28-30].

Autotransplantation has advantages of inducing bone formation and reestablishment of normal alveolar process [31,32]. This treatment option may be valuated as a temporary measure in young patient in order to maintain the volume of alveolar bone ridge [32,33].

Successful management of anterior impacted maxillary tooth can be challenging in a clinical practice. Proper diagnosis concerning the exact localization of the impacted tooth, an appropriate surgical technique, and a light orthodontic force system can be an effective approach to successfully bring the tooth into occlusion. The closed-eruption technique provided an esthetically pleasing result in this patient.

The authors declare that they have followed the protocols of their work center on the publication of patient data.