Photobiomodulation for Treatment of Prolonged Ageusia Triggered by COVID-19 Contagion

Copyrights: ©2022 Soares PC, Freitas PM, Eduardo CP, Belmonte FM, Fukuoka GL, et al. This is an open-access article distributed under the terms of the Creative Commons Attribution License, which permits unrestricted use, distribution, and reproduction in any medium, provided the original author and source are credited.

Objective: The aim of this case report is to describe Photobiomodulation Therapy (PBMT) as an alternative for the management of ageusia following infection by COVID-19.

Method and Materials: PBMT was performed using a 660 nm and 808 nm diode laser (1 J/point, 100 mW, 10 sec, 40 points on tongue) and taste perception recovery was assessed by a quantitative test with hyper-concentrated substances (acid, bitter, sweet and salt), using a 0-10 score. Taste tests were carried out before treatment, after 8 and 16 PBMT sessions.

Conclusions: PBMT using the parameters set for the present clinical case was shown to be effective, noninvasive and an option of therapy for the management of prolonged dysgeusia COVID-19 related.

In April 2020, The Centers for Diseases Control and Prevention (CDC) correlated the partial or total loss of taste (dysgeusia, parageusia, ageusia) as possible symptoms of COVID-19 [3]. Authors have suggested that the reason for taste loss is virus interaction with Angiotensin-converting Enzyme 2 (ACE 2) and Transmembrane Protease Serine (TMPRSS2), both structures expressed in oral mucosa, with higher levels in taste bud cells. Additionally, taste loss can be one of the first symptoms to be noticed following infection by COVID-19 and persist for long periods [4].

The lack of evidence for treatments of COVID-19’s secondary symptoms, such as ageusia, has motivated the researchers to investigate the treatment that are already indicated for other similar clinical conditions. Photobiomodulation Therapy (PBMT) is an alternative for the management of soft tissue alterations, including damage caused by radiation, chemotherapy, or trauma in oral mucosa [5].

The present case report evaluated the effect of PBMT with two wavelengths combined in a patient who developed persistent hypogeusia and hyposmia, lasting for 270 days after COVID-19 diagnosis, increasing taste perception.

The patient, a 35-year-old female, with shrimp hypersensitivity, had not reported comorbidities other than COVID-19 infection 9 months ago, with no need for hospitalization. In the first week after COVID-19 diagnosis, during the infectious phase, the patient reported use of ivermectin, azithromycin and corticosteroids, without a record of dosage and amount of these substances intake. In addition, she reported the development of other symptoms after COVID-19 infection, such as myalgia, arthralgia and memory problems. The PCR test was performed to confirm the diagnosis of COVID-19 infection, dated May/2021.

In February/2022 - nine months after infectious phase (attested by positive PCR-RT COVID-19 test), the patient sought professional help at the Special Laboratory of Lasers in Dentistry (School of Dentistry, University of São Paulo, Brazil), due to persistent hypogeusia and hyposmia.

Informed consent was obtained prior evaluation and experimental treatment. To assess the patient's taste perception, she was blindfolded and the response to hyper concentrated substances perceived by the tongue was evaluated. The patient received homogenous liquid (5 ml in total) of four different substances (acid, bitter, sweet, and salty). The patient graded all substances from 0 (lack of taste perception) to 10 (strong taste perception). Response to the presence of distorted taste was also recorded using the same methodology. The patient also graded her overall sense of smell, being 0 anosmia and 10 perfect olfactory capacities, as they perceived before the diagnosis of COVID-19.

Photobiomodulation (PBMT) sessions were then initiated, being held twice a week. The PBMT protocol consisted of the use of red and infrared wavelengths applied simultaneously (660 nm associated with 808 nm low power diode laser - Therapy EC, DMC, São Carlos/SP, Brazil), with the energy of one J per point of irradiation, continuous wave, output power of 100 mW for each wavelength, irradiating tongue dorsum (24 points) and 12 points bilaterally on tongue lateral border(12 total), with one centimeter distance between points (total of 40 points, as shown in Figure 1. Parameters are depicted in Table 1. 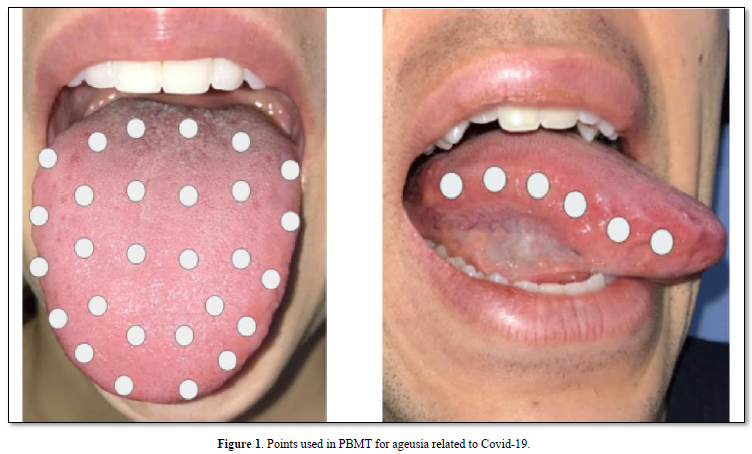 After 102 days and 16 PBMT sessions, the patient did not report full recovery of taste and smell, although great improvement was obtained. Response to bitter taste began to be perceived as “taste of smoke”, characterizing the evolution from ageusia to dysgeusia in bitter taste.

The development of taste capacities during experimental PBMT treatment was evident in both quantitative outcomes measured by the authors and self-reported improvement in daily nutrition and response to food. The usage of PBMT to treat this condition appears to be one safe, non-invasive and simple alternative, due to the inconsistency found in literature related to options of treatment of Covid Related Long Taste Impairment. PBMT is used for oral tissue repair in different circumstances when oral mucosa repair is desired [5]. PBMT can modulate the repair process of damaged tissues, modulate inflammatory processes and induce cellular repair. The main concept supporting the usage of PBMT, in this specific situation, is to induce reduction or resolution in chronic inflammatory state in oral epithelium and taste buds structures, which might be the responsible for alterations in taste perception [4].

One of the limitations presented in the usage of such technique is the development of dysgeusia after PBMT applications in this case-report, despite the initially limited taste perception, which was increased but presented altered perception. These results are similar with the one presented by Campos [6], which demonstrates the different levels of symptom remission after PBMT of the tongue. Another finding in our case-report is self-reported smell improvement without direct irradiation of the nasal cavity, once the protocol was restricted to tongue irradiation. There are reports of smell improvement after direct irradiation of nasal cavity [7], but this finding in our study might be explained due to systemic effects generated by PBMT, despite the lack of evidence of such effect and parameters in literature [8].

It remains unclear COVID-19 infection pathway and its consequences, which may be related to receptors widely present in gustatory and olfactory cells, leading to partial or total perception loss for a prolonged period. It is not well understood why these cells have such prolonged malfunction and, in some cases, patients persist with prolonged taste or olfactory disturbances after COVID-19 infection [9,10]. Symptoms can vary, according to different studies, ranging from complete ageusia to parageusia or even dysgeusia. In addition to that, symptoms appearance rate is also not well known, varying according to the methodology and the analyzed population [10]. The presence of concomitant neurological symptoms with taste impairment is well described and was observed in this patient [11], and the presence of neurological alterations might be speculated as the cause of taste impairment. Interestingly, in our case report, the patient did not report improvement in self-reported neurological symptoms despites the considerable evolution in taste perception.

The exact explanation of why these symptoms are perpetuated in some patients remains unclear. Another aspect that needs to be clarified is if the prolonged taste impairment is developed due direct viral damage, or indirect innate immunologic response which targets structures for taste perception and/or signal transduction, creating a persistent inflammatory response in such tissues [9].

The authors are aware of the limitations of the present case-report, such the absence of Umami or other distinct tastes evaluation. Flavor perception is directly connected with a very complex arrangement of sensory processes involving different cranial nerves, and is directly connected with trigeminal perceptions, olfactory and taste bud perception [12]. We regard this methodology as a simple and reproducible way to evaluate different taste perceptions in tongue as a manner to perceive COVID-19 taste impact. Additionally, self-reported smell evaluation is very subjective, and results must be carefully interpreted.

PBMT can be an effective, noninvasive alternative to treat prolonged ageusia, dysgeusia or parageusia related to COVID-19. Response to sweet and bitter substances was more affected than acid and salt in this patient, with possible immune inflammatory response perpetuating this symptom.