Copyrights: ©2022 Ather NA, Bilal S, Afaq A & Khan JA. This is an open-access article distributed under the terms of the Creative Commons Attribution License, which permits unrestricted use, distribution, and reproduction in any medium, provided the original author and source are credited.

Background: Tobacco smoking is a major contributor to various health problems. Dentists can play their role as communicators regarding tobacco smoking cessation practice if they are well trained in this respect during their graduation years.

Results: 146 clinical dental students took part in the study. Out of the total, 21.2% were males and 78.8% were females. Only 9.6% (n=14) were smokers, although 60.3% (n=88) were passive smokers. The majority (97.9%) agreed that dentists had a role in smoking cessation practice and 91.8% agreed that dentists should routinely advise patients on tobacco cessation. Although 86.3% of the students took the history of smoking, only 11% counseled about smoking cessation. Inadequate counseling training was the reason 54.8% participants did not counsel against smoking. Most participants (91.1%) had received no training for counseling about smoking cessation. 93.8% agreed that tobacco cessation techniques should be included in the dental curriculum.

Conclusion: Dental students and dentists can play a pivotal role in the community in advocating cigarette-smoking cessation. Formal training of undergraduate dental students should be implemented at the national level to enable them to educate and counsel their patients to stop smoking.

Tobacco smoking causes not only cancers, but it’s the single most common culprit responsible for various diseases. Tobacco use causes serious systemic and oral health problems and affects the general health of smokers [1,2]. It is the single most important source of preventable morbidity and premature mortality worldwide [3]. According to The Global Adult Tobacco Survey (GATS) Pakistan, in 2014 22.2% of men, 2.1% of women, and 12.4% overall (15.6 million adults) were smoking tobacco [4], which must have been increased many folds by now. Health professionals have an important role in reducing tobacco use; even brief and simple advice from health professionals can have a beneficial effect and can significantly increase smoking cessation rates [5]. Therefore, one strategy to reduce the number of smoking-related deaths is to encourage the involvement of all health professionals in tobacco-use prevention programs. Dentists, being an important pillar of health profession, can play a significant role in reducing the no. of smokers by getting actively involved in the program. This is only possible by bringing a change in attitude and perception of dental students towards smoking and by incorporating the tobacco cessation counseling and techniques in the dental curriculum. Studies show smokers are more likely to quit smoking permanently if they receive health professional help, behavioral counseling, and pharmacologic treatment [6]. General practitioners and physicians inquire and counsel patients regarding smoking as their usual practice. Although dental students and practicing dentists routinely take the history of smoking, but make less or no effort regarding counseling for smoking cessation [7]. Majority of dentists believe that providing information about tobacco cessation and offering smoking cessation support are part of their duty, but only few dentists actually involved in this actively. Attitudes toward tobacco cessation counseling are influenced by the level of knowledge and smoking experience of clinicians. There are various factors which act as a barrier which include lack of time and reimbursement issues, lack of proper training of smoking cessation counseling and techniques at both undergraduate and postgraduate levels and poor co-ordination of dental and smoking cessation services. Dentists’ reluctance to take part in cessation activities has also been an important hurdle. Lack of training and knowledge of how to integrate cessation counseling in their practice is another obstacle. By delivering a strong 2- to 3-minute cessation message to smokers as part of routine care, health professionals can achieve quit rates of 15-20% [8]. Practicing dentists know that advice about tobacco side effects should be given during dental appointments [9] and show a desire and the need for cessation training of dental professionals entering practice and those currently in practice.

There were 146 clinical dental students who took part in the study, half each from public and private universities. Their demographic distribution is given in Table 1.

The students' knowledge, attitude and practices towards tobacco cessation practices are summarized in Table 2. 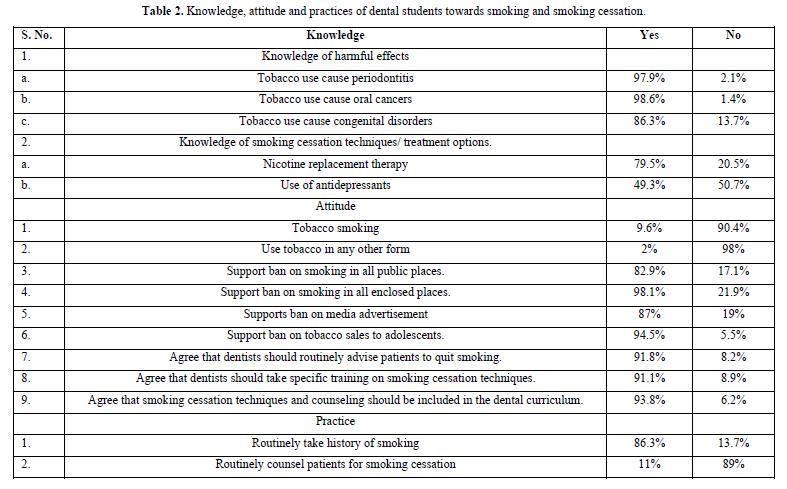 Most of the students were aware of the harmful effects of smoking like periodontitis (97.9%), oral cancers (98.6%) and congenital disorders (86.3%). A good number recognized nicotine as a replacement therapy for cigarette smoking (79.5%) but only half of them knew the use of antidepressants as an alternative to cigarette smoking (49.3%). Very few of them (9.6%) were smokers, while 60.3% were passive smokers. Few of them had the habit of consuming tobacco in the forms other than smoking (2%). Nearly all of them reinforced that cigarette smoking should be banned at private places (82.9%), enclosed places (98.1%), sales to adolescents should be banned (94.5%) and cigarette advertisements should be banned (87%). Majority (97.9%) agreed that dentists have a role in smoking cessation practice and 91.8% agreed that dentists should routinely advise patients for tobacco cessation. Most of them (86.3%) reported history taking of smoking routinely, however, only 11% had counseled for cessation. Inadequate counseling training and skills were the main reason for not counseling patients (54.8%). Other reasons were lack of reimbursement (13.7%) and lack of time (28.1%). A high proportion of participants (91.1%) did not receive any training for smoking cessation practice. 93.8% agreed that tobacco cessation techniques should be included in the dental curriculum.

Medical professionals have responsibilities to reduce the prevalence of tobacco use among their patients, including dentists. Everyone should play their due role in order to decrease the increasing tobacco smoking related mortality and morbidity. To achieve this goal, students related to the medical profession should be trained and should have a positive attitude towards helping their patients to quit smoking. Therefore, we conducted the study to know their current attitude, knowledge, and practice as dental students. Our study identified several important aspects in this regard, including a relatively low prevalence of smoking among medical students as compared to the general population. Similar smoking prevalence has been highlighted in surveys from individual medical colleges of Pakistan in the past as well. From Lahore, CMH Lahore Medical College and King Edward Medical University Lahore had 10.6% and 13.45% students who smoked, respectively [11]. From Karachi, Hamdard University had 14.5% smokers while Agha Khan University Karachi had 14.4% smokers [12,13]. While this is in contrast to a systemic review which showed increased prevalence of smoking among health care workers (includes medical, dental, pharmacy, physical therapy, nursing and other paramedical staff) [14] our study focused on dental students only. There are many international studies showing low prevalence among dental students [15,16]. It was found that there was a noticeable difference in smoking prevalence between male and female genders; almost all the smokers were male. That is another reason for relatively low prevalence among dental students as most of the students were females, reflecting the predominance of female gender in dental and medical colleges these days. It is also evident in other studies as well [17,18]. The prevalence of tobacco use among Muslim women compared to men is significantly low because of a strong association with social values and norms [18]. Same results were shown by another multi-center cross sectional study conducted in 3 Arab countries (Lebanon, Syria and Tunisia) [19]. Low prevalence was also shown in another study in Estonian dental students, but they found no difference in male and female prevalence [20]. The students were well aware of harmful effects of tobacco smoking, especially those affecting the oral cavity, including periodontitis, oral cancers, which is reflected in other studies [15,21]. Although a vast majority knew about the nicotine as a replacement therapy but only half of them were aware of antidepressants as treatment modality for smoking cessation, which shows the lack of knowledge regarding smoking cessation. Similar results were shown by another study conducted in India [22]. That is because most of them didn’t receive any training during their clinical years. There was no significant difference in attitudes by gender or smoking status. We found a positive attitude towards banning of smoking in the public and enclosed places, smoking advertisements, and tobacco sale to adolescents. Almost all the students agreed that dentists have pivotal role smoking cessation counseling and they should advise their patients routinely. They also agreed that smoking cessation counseling and techniques should be a part of dental curriculum. We found the similar attitude in other dental students across the world [15,22,23]. Regarding the current practice of smoking cessation skills among the dental students we found that although most of them routinely obtain the history of smoking but only few of them advise for smoking cessation. Inadequate counseling skills and knowledge was the major barrier for it. Other barriers were lack of time and reimbursement. The difficulty faced by the dental students in providing guidance to their patients is basically due to lack of teaching about tobacco smoking cessation techniques at undergraduate level. These barriers were also evident in other studies as well [24,25].

Dental students should also take a detailed history regarding tobacco smoking routinely, should motivate, encourage and counsel their patients to quit this habit. We strongly advocate the inclusion of tobacco smoking cessation training and techniques in dental curricula as well. Finally, all the health care providers in association with their national medical and dental council and health professional associations must play a leading role in advocating for implementing a comprehensive tobacco control policy. In conclusion, there is an urgent need to sensitize and train health professionals at the community level in the treatment of nicotine dependence as most people cannot afford to go to a specialist tobacco cessation clinic, nor can the Government afford to run them.