Copyrights: ©2022 Prashanthy MR, Prabu D, Rajmohan M, Bharathwaj VV, Sindhu R, et al. This is an open-access article distributed under the terms of the Creative Commons Attribution License, which permits unrestricted use, distribution, and reproduction in any medium, provided the original author and source are credited.

Aim: To assess the effectiveness of colchicine as one of the interventions for Oral submucous fibrosis.

Results: Three studies were included in this systematic reviews, which were randomized controlled trials and pilot studies. There were studies performed in different countries. Among the three trials, two were found statistically significant, but further studies should be done to prove the effectiveness of colchicine for oral submucous fibrosis. Two studies found significantly higher improvement in mouth opening and reduction in a burning sensation in the colchicine group compared with the control group whereas one studies found significant improvement in blanching of mucosa was seen in both the groups.

Oral Submucous Fibrosis (OSMF) is a precancerous state of the oral mucosa. It is described by a perverse generation of collagen prompting inelasticity of the oral mucosa and atrophic changes of the epithelium. It is a premalignant condition mainly associated with the practice of chewing betel quid containing areca nut, a habit among Indian people. In 1952, Schwartz discovered a disease in five Indian patients. He called the disease atrophic idiopathic mucosae oris [2]. The same diseases were described by Pindborg and Sirsat as an insidious, chronic disease affecting any part of the mouth and sometimes the pharynx. On intraoral examination, the blanched appearance of the oral mucosa was seen. The hard and soft palate was pale, blanched and the uvula was shrunken. This condition was more predominant in men, possibly owing to taboos accompanying oral chewing habits in women [3].

The areca nut cultivates on the Areca catechu palm tree which is frequently initiated in the Pacific Islands and South Asia. It was enfolded in betel leaves or in the form of profitable preparation of pan masala, mawa, gutkha (a preparation of betel nuts and tobacco designed to be chewed), or supari. The most potent alkaloid, arecoline, causes an abnormal increase in the production of collagen by the oral mucosal fibroblast. The early-stage symptoms include burning sensation in the mouth, development of ulcers and vesicles, increased salivation and blanching of the mucosa. In the later stages, the mucosa becomes inelastic and leathery because of the fibrotic bands [4].

Colchicine is an alkaloid removed from plants of the genus Colchicum (harvest time crocus). It has been used as early as a thousand five hundred BC to treat the inflammation and it was approved for medical use in the United States in 1961. It was available as a generic medication in the United Kingdom, and the cost of supply within a month’s in the national health schemes about 7.27 pounds.

Colchicine has been used for oral submucous fibrosis and additionally, it has been utilized in different diseases including Behcet's diseases, pericarditis, coronary artery diseases, and other inflammatory and fibrotic conditions [5]. Thus the aim of this study is to assess the intervention for oral submucous fibrosis using oral colchicine as one of the interventional arms of the studies included.

Control: placebo, or another active intervention.

Published literature on assessing the effectiveness of oral colchicine for oral submucous fibrosis which includes original articles and research papers in databases such as Pub Med Central, Science Direct, and Cochrane Central Register of Controlled Trials (CENTRAL) were taken into a study for review from 2000 to 2018. A literature search to collect relevant data was performed using keywords Oral Colchicine AND oral submucous fibrosis.

The search yielded 642 articles, of which 103 were screened and were independently assessed. Among these potentially eligible articles were included. Figure 1 showed the flow diagram of reports that were identified, screened, assessed for eligibility, excluded and included in the present study.

Table 1 shows the characteristics of the intervention in the included studies. In all the three studies, adequacy of colchicine was compared with the intralesional injection of hyaluronidase and a control group. All investigations varied in terms of sample size, age of the population and term of intercession. All three trials were performed among patients with the habit of chewing pan, tobacco, and betel nut from the outpatient department of various hospitals in the abovementioned cities. Every known cause of irritants was removed. All three trials were done for 12 weeks wherein the control group was different in one study.

Table 2 appears the outcome data about the primary and secondary of the interventional group. The impact factor of the colchicine and the control group effectiveness for the oral submucous fibrosis in the included studies. The p-value was mentioned in two studies in the results whereas it was not mentioned in one study.

Table 3 shows the bias shown in all the studies, including in the study, which was categorized as high risk bias, low risk bias and unclear risk bias. The bias was categorized according to the Cochrane risk of bias for randomized controlled trials and pilot study. 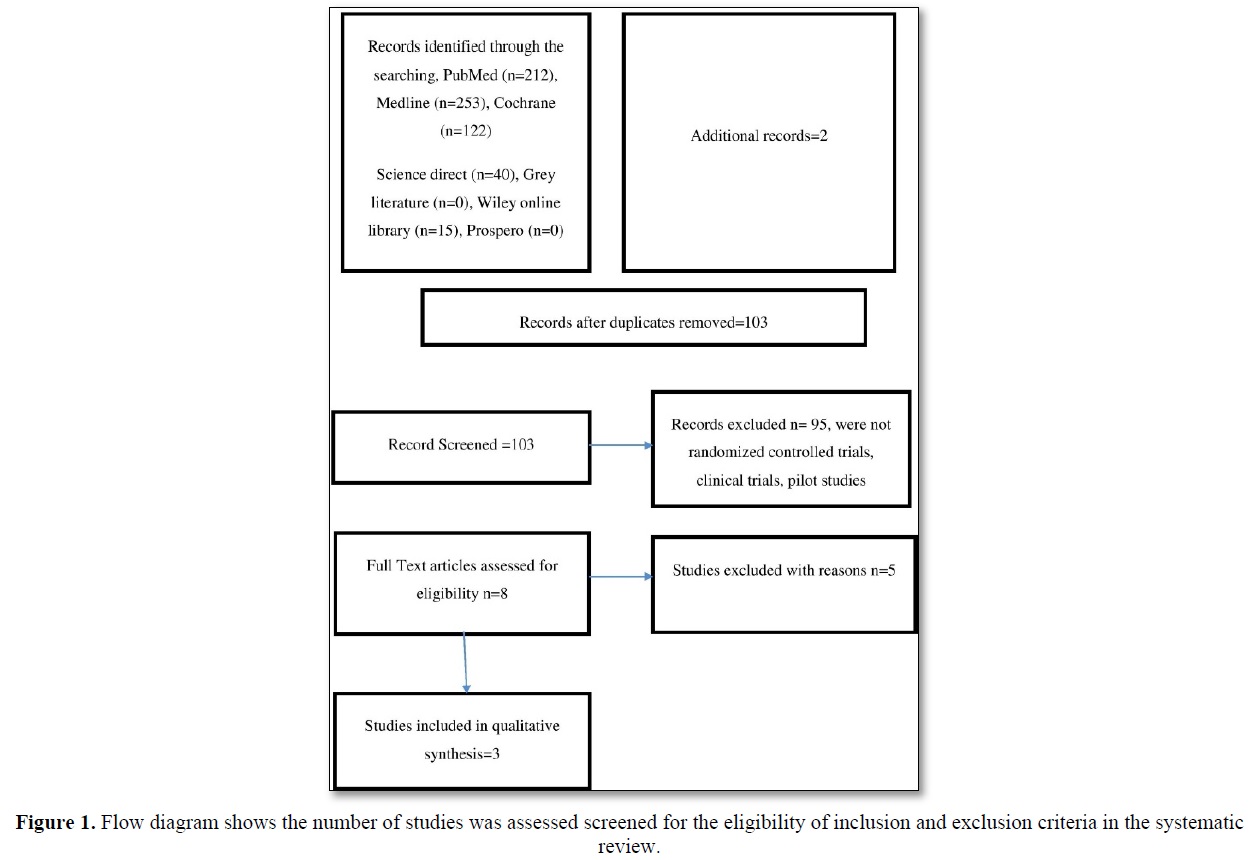 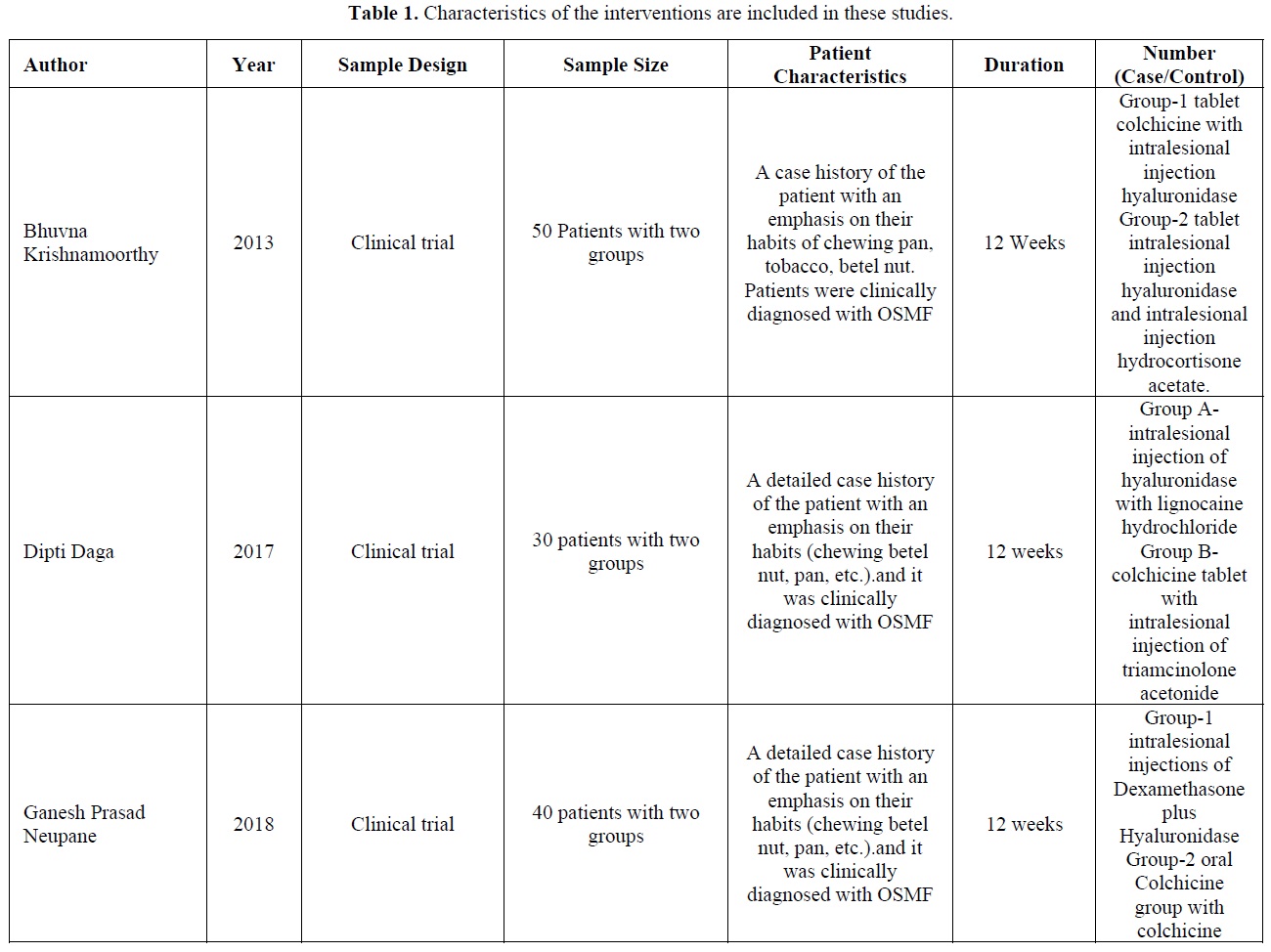 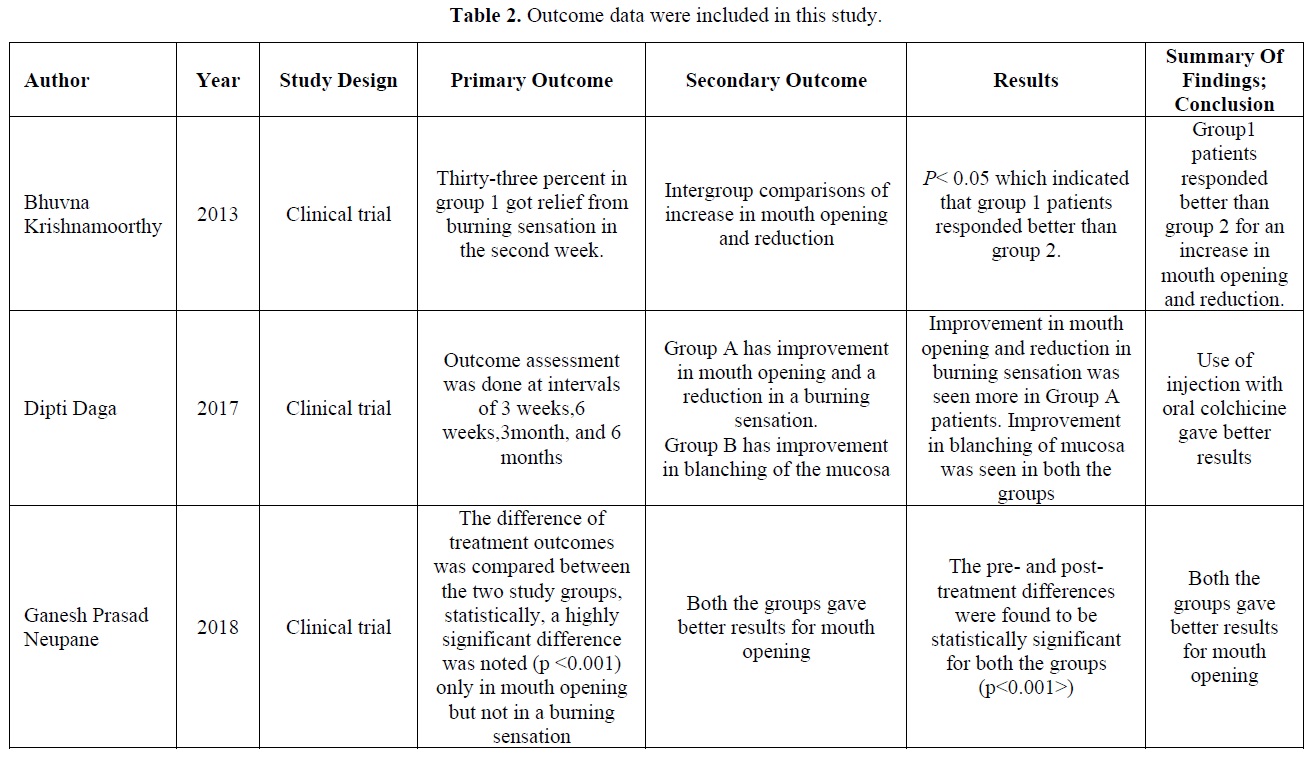 Oral submucous fibrosis is a precancerous condition that affects the oral mucosa as well as the pharynx and the upper two-thirds of the esophagus. The global incidence is estimated at 2.5% of oral submucous fibrosis. The current study was performed according to the PRISMA method for the systematic review analysis of RCT and it described the new medical drug was Colchicine in the form of tablets. Comparison of colchicine with intralesional hyaluronidase and other drug included in these studies as a control group. Exercising the fibrotic bands under anesthesia [6].

The current study was conducted to address the research based on colchicine drug was effective in the management of oral submucous fibrosis. The effects of the systematic review revealed that colchicine was significantly more effective in reducing burning sensation, blanching mucosa, and increasing the mouth opening. Compare with other drugs, while oral colchicine was the best drug for oral submucous fibrosis. Moreover, at the end of the third month, there was no significant difference between the groups.

The main role of the present study was to assess the effectiveness of colchicine in relieving pain/burning sensation in patients with oral submucous fibrosis. Visual analog scale (VAS) reliable pain scale was used in most of the included studies. The three studies reported that preeminence of colchicine was reduced the pain in oral submucous fibrosis patients especially at the end of the first and second months [7].

The most broadly acknowledged hypothesis for the pathogenesis of oral submucous fibrosis was an autoimmune disease. The probability of a hypersensitive reaction had been considered due to the high consumption of spicy food and betel nut chewing in the Indian population [3]. By contradicting the activity of soluble variables discharged by sharpened lymphocytes following initiation by explicit antigens, steroids and it act as immunosuppressive agents [8].

In this study, Group 1 patients acquired in the treatment of colchicine with different drugs as a tablet, and injection form is the conservative management to relieve the symptoms of burning sensation, increasing the mouth opening. The author of three studies was compared with the colchicine drug with different medications and its efficacy. Group 2 patients had relief of symptoms, even though the character of the fibrous band and the reduction of mouth opening are improving. Sometimes both groups have been showing some significant improvement. Along these studies appears more conservative and simpler treatment although palliative treatment proved to be safer.

Every single accessible treatment gives the patient just a symptomatic relief, which is brief. This is an important fact that the cause for the irritants was not fulfilled and the etiology of the disease was not completely comprehended and the illness is dynamic. The younger the age, the rapid progression of the illness, and the symptoms were periodic. Certain medicine, as submucosal injections of steroids, however well known, is palliative and it would not have healing value [9].

Bhuvna Krishnamoorthy discussed in the clinical trial study of oral submucous fibrosis along with two groups. Treatment was based on the conservative approach, Group one patients administered the tablet colchicine orally, 0.5mg twice daily for 12 weeks. Group two Patients were administered an intralesional injection of Hyaluronidase 1,500 IU as in group one and 0.5 ml of injection Hydrocortisone acetate 25 mg/ml in each buccal mucosa once a week alternatively. Both groups were treated for 12 weeks and results are clarified that intergroup comparisons would be increased in mouth opening and reduction in histological parameters indicated that group one patients responded better than group two [10].

Dipti Daga discussed in the clinical trial study of oral submucous fibrosis along with two groups. Group A patients were administered the intralesional injection of hyaluronidase with lignocaine hydrochloride twice daily. Group B colchicine 0.5mg twice daily with an intralesional injection of triamcinolone acetonide 10mg/ml for 12 weeks. Improvement in mouth opening and reduction in burning sensation was seen more in Group A patients. Improvement in blanching of mucosa was seen in both the groups [11].

Ganesh Prasad Neupane discussed in the clinical trial study of oral submucous fibrosis along with two groups. Group one patients were treated by injection of dexamethasone plus hyaluronidase 1500IU in buccal mucosa for 12 weeks. Group 2 patients in the colchicine group received tablets colchicine 0.5mg twice daily for 12 weeks. The results should prompt with treatment outcomes was compared between the two study groups statistically highly significant difference was noted in mouth opening, whereas it would not be reducing the burning sensation [12].

The limitation of this study based on fewer clinical trials included in the systematic review and the low number of sample sizes in the included studies. The main limitation was the methodological error in some of these studies reflected in the high risk of bias resulting from improper randomization and inadequate blinding. It has a significant limitation resulted from the included studies with regards to comparator groups, measurement of outcomes, and patients' age.