Copyrights: ©2022 Iordanis P. This is an open-access article distributed under the terms of the Creative Commons Attribution License, which permits unrestricted use, distribution, and reproduction in any medium, provided the original author and source are credited.

Methods: In the period from January 1 to November 30 of 2021 a total of 871 dermatological patients were examined. Of the examined dermatological patients, there were 15 children with warts either on their feet or on their hands. The children's parents were also examined voluntarily for the presence of warts. The parents had received the tuberculosis vaccine. There were also 32 patients with genital warts.

Conclusions: There is evidence of a correlation between BCG vaccination and prevention of HPV infection.

The Bacilli Calmette-Guerin vaccine has been used for more than 100 years to protect against tuberculosis. More than 90% of children worldwide have been vaccinated [1]. Unfortunately, in some countries the BCG vaccination is not mandatory if the incidence of tuberculosis is very low [2]. The vaccine contains live attenuated strain of the tubercle bacterium Mycobacterium bovis. The vaccine is more effective in children compared to adults [3]. It acts on the immune system in many ways, especially on cytokines [4]. The BCG vaccine has been studied to protect against viral respiratory infections especially to the elderly people [5].

Due to its prophylaxis against viral infections, the tuberculosis vaccine has also been studied in HPV infections as a therapeutic agent. Intralesional immunotherapy has been reported to warts with the use of BCG vaccine. The percentage of the clearance of the lesions came up to 95%. It is an alternative therapy for the wart’s infection to children [8]. Another study shows that BCG vaccine can be used as a therapy of first choice compared to other therapies like salicylic acid [9].

The BCG vaccine shows a significant role to the concentrations of Interleukins 4 and 12 in patients with genital warts [10].

Human papilloma virus has more than 100 subtypes. The commonest manifestations are warts and genital warts. Usually, the treatment takes a long time. Sometimes they resolve spontaneously. They are some subtypes of HPV such as 6, 11, 16, 18, 31 and 35 who are associated with malignancies [11].

Koebner phenomenon often appears in body areas that they have been affected with HPV infection. Genital warts are one of the expressions of the sexually transmitted diseases [12].

They are HPV vaccines with 9-valent offering protection against HPV infections [13].

There are several studies that have been done on the effectiveness of BCG vaccine as a treatment for warts and condylomata. However, there is no study that shows the correlation of warts presentation with tuberculosis vaccination.

In the period from January 1 to November 30 of 2021 a total of 871 dermatological patients were examined. The children's parents were also examined voluntarily for the presence of HPV infection. All the patients with HPV infection and the parents of the children were asked if they had been vaccinated with the BCG vaccine in the past.

The elderly people were examined for the presence of warts regardless their original dermatological disease and they had been asked if they were vaccinated with BCG in the past.

The data are presented by numbers and are expressed as numbers and percentages. This study was conducted in compliance with the ethical standards of the responsible institution on human subjects as well as with the Helsinki Declaration. The patients' parents were informed about the data collection and gave their written consent.

From all the examined dermatological patients only 47 (5.4%) patients had HPV infection with clinical manifestations such as warts or genital warts (condylomata). Out of all the examined dermatological patients, there were 15 children with warts either on their feet or on their hands with one or multiple lesions. One of the children had flat warts (Verruca Plana) on his face. There were also 32 patients with condylomata in the genital area of the 32 adult patients, 3 were female and the rest were male. The main location of the lesions was in the perinatal area and two patients had lesions only in the anal area (Figure 1). 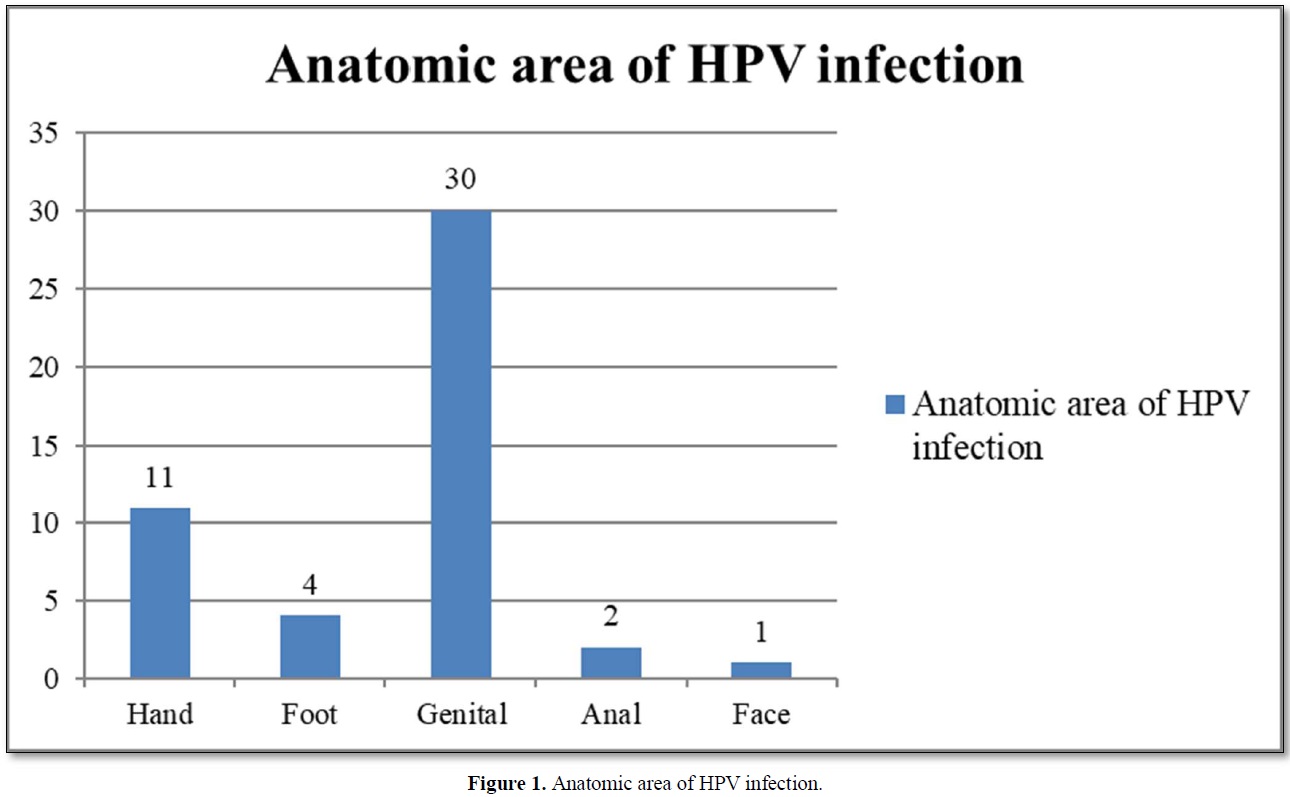 None of the children has been vaccinated with the tuberculosis vaccine. In contrast all the parents of the affected with HPV children had the BCG vaccine in the past and they had not HPV clinical manifestations. None of the elderly people had HPV infection and all of them had the BCG vaccine in the past. From the 32 patients with genital warts 26 of them has not done the tuberculosis vaccination. 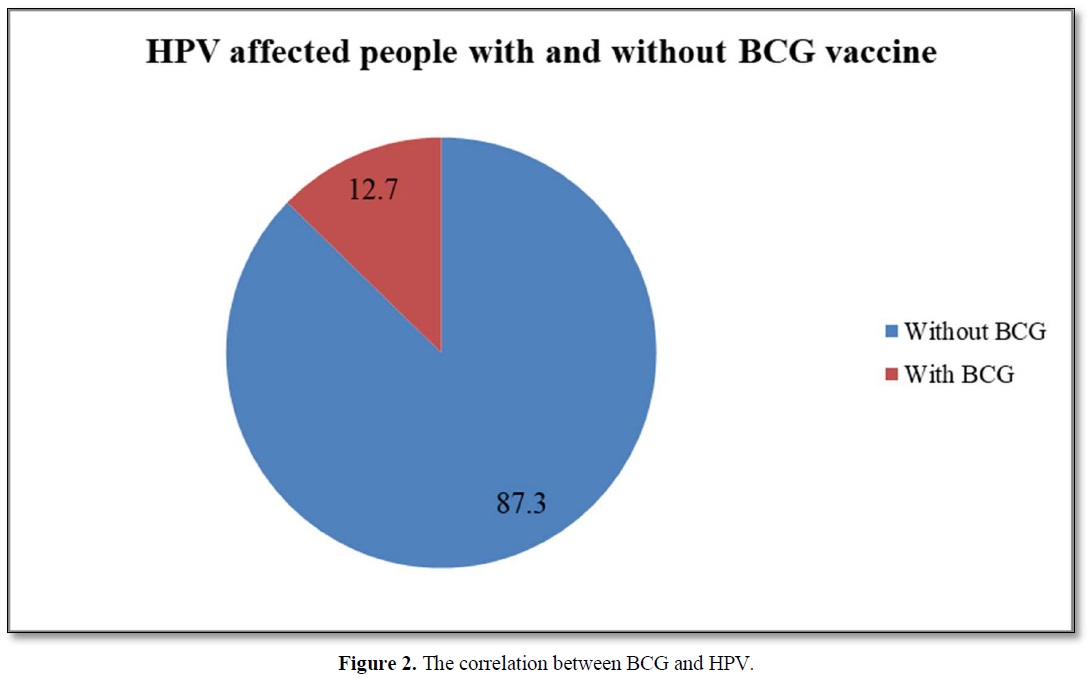 We have already known that the presence of the viral infections for the age group under 65 years old is almost 9% and for the elderly people over 65 years old is almost 2.5% [14]. In our study the presentation of HPV infection in dermatological patients is 5.4%. A common finding is that HPV infections are rarer in elderly people than the rest of the population. One logical explanation is because the body activities are less in this stage of age. The immune system of the old people is weaker than the others. Although they have a weaker immune system; they do not have more frequent viral skin infections.

It was also observed that the parents of children who are middle-aged and have increased physical contact with their children who had HPV infection did not have an HPV manifestation.

A common finding of the middle aged and elderly people is that most of them had done the BCG vaccine when they were younger.

It is a fact that HPV manifestations are much common in children and young adults than the other age groups. Many studies show that BCG vaccine protect against viral infections especially to the elderly people. In recent years, vaccination has stopped in countries where tuberculosis does not exist. The BCG vaccine may provide some form of protection against HPV infections. More studies should be done to this direction.