A Review on Management Considerations against Mycotoxins in Dairy Cattle Ration

Copyrights: ©2022 Abdelhameed O & Rabbo BA. This is an open-access article distributed under the terms of the Creative Commons Attribution License, which permits unrestricted use, distribution, and reproduction in any medium, provided the original author and source are credited.

Mycotoxins, their toxicity levels and effects on animals are of greatest concern in dairy feed. In this review we discuss the mechanism of mycotoxins toxicity, the methods for testing their presence in dairy feed as well as their impact on the body antioxidant system. Many preventive strategies are applied to reduce the problem of mycotoxin in dairy feed. We reviewed the types of toxin binders available in the market with their active ingredient components and mode of action. We also propose the criteria for buying and selection the suitable and proper mycotoxin.

Molds are living microorganisms that contaminate raw material from field to storage all over the world. Growth and type of mold depends on environmental condition (temperature, hygrometry, activity of water AW).  Molds are sensitive to temperature, chemical treatments (acids are mold inhibitors) Mold are not all toxinogens and some molds can synthesize many types of toxins. These toxins are highly toxic to animals and human. Mycotoxins are small chemical molecule (secondary metabolites) produced by molds. Mycotoxin synthesis depends on environmental conditions (agriculture techniques, climate, harvest conditions & storage conditions). Mycotoxins are heat resistant, not sensitive to processing or chemical treatment (except aflatoxins). No visible signs of contamination of the raw material or feed are seen. Potentially 300,000 mycotoxin molecules were available around the world. 300 of them were identified, but only 30 were studied. Mold development consequences are mycotoxins and they exert their effects through several means:

The mycotoxins of greatest concern in dairy industry are (Table 1):

Generally, laboratories provide analysis for only a limited number of mycotoxins, perhaps including aflatoxin, ochratoxin, DON, fumonisin and T- 2 toxin. Minimum detection levels may be limiting because they are often directed at finding high levels that cause serious animal disease rather than low levels that are associated with production losses, impaired immunity and significant economic losses. Different methods are now used for testing of mycotoxins. These methods include the following:

Throughout history, mycotoxins (as we know them now) have impaired the quality of agricultural products. Major commodities such as corn, wheat, rice, soy and peanuts can be contaminated with mycotoxins, depending on growth conditions and storage conditions.

Increased concern for food and feed safety have brought mycotoxins to the spotlight and with that, the need for reliable and efficient mycotoxin screening. With over 35 years of experience in this field, Romer Labs (Austria) offers the most comprehensive portfolio of mycotoxin test kits for the detection of regulated mycotoxins (aflatoxin, ochratoxin, fumonisin, deoxynivalenol, zearalenone, t-2 and ht-2) in agricultural commodities such as raw grains and nuts, grain by-products and feed formulation.

Preventive strategies and Management of Mycotoxins

Good management practices will help reduce the problem of mycotoxins in dairy rations. The study of the toxicity mechanism in the animal will elaborated the best formulation able to fight against mycotoxins.

The first preventive measure is to purchase ingredients that are relatively free of mycotoxins. Beware of feedstuffs that appear suspicious. Store grains at moisture levels less than 14 percent. Commence a clean-up program around the feed mill or feed troughs to eliminate damp areas suitable to mold growth. Be very cautious in the purchasing of corn and/or peanut meal during seasons when crops are being harvested following a drought.

Detoxification of contaminated feed: Decontamination processes, as indicated by FAO, needs the following requisites to reduce toxic and economic impact of mycotoxins, it must destroy, inactivate, or remove mycotoxins; it must not produce or leave toxic and/ or carcinogenic/ mutagenic residues in the final feed, it must be capable of destroying fungal spores. It should not adversely affect physical and sensory properties of the feed stuffs; it has to be technically and economically feasible. A wide range of chemicals have been shown to reduce, destroy, or inactivate mycotoxins. These chemicals include acids (hydrochloric acid), bases (ammonia, sodium hydroxide), oxidizing agents (hydrogen peroxide, ozone), reducing agents (sodium bisulfate), chlorinating agents (sodium hypochlorite, chlorine dioxide and gaseous chlorine) and miscellaneous reagents as formaldehyde.

Second approach is by the addition of the mineral clay products such as phyllosilicates, bentonites and hydrated sodium calcium aluminosilicate (HSCAS) has been used to reduce the bioavailability of mycotoxin in feed. These compounds probably work by nonspecific binding to the mycotoxin and reducing the passage time through the gut barrier.

Recently, some complex indigestible carbohydrates (cellulose, polysaccharides in cell wall of yeast and bacteria) such as, glucomannans, mannooligosaccharides (Mos), peptidoglycan (Beta glucan), Esterified glucomannan and synthetic polymers such as cholestyramine & polyvinylpyrrolidone have been used as effective mycotoxin adsorbents (binders).

There are several toxin binders’ products available in the market. They are varying in active ingredients and in their mode of action against mycotoxins through reduction of damage when absorption occurs.

In addition to special care to prevent the growth of moulds, detoxification measures, reduction of gastrointestinal absorption, there is a need for prevention of mycotoxin - induced toxic effects on the toxin are ingested.

Nutritional approaches, such as supplementation of nutrients, food components, or additives with protective effects against mycotoxin toxicity are assuming increasing interest since some mycotoxin some mycotoxins (FB1, AFB1, DON, and T-2) have been known to produce damages by increasing oxidative stress. Selenium, Vitamin E, Vitamin A, Vitamin C and BHT (powerful chemical antioxidant) were found to improve antioxidant status of the animal. They also protect against toxic effects of mycotoxins.

Impact of Mycotoxins on the body׳s antioxidant defence:

Protective effect against lipid peroxidation caused by mycotoxins was attributed to various antioxidant compounds such as vitamin A, vitamin E, vitamin C and selenium.

Mycotoxin adsorbents (binders) can substantially improve the status of antioxidant system. This effect depends on mycotoxin - binding activity of the adsorbent (binder) whether it contains antioxidant compound or not (Table 2).

To choose or buy a toxin binder one should look to the following points: 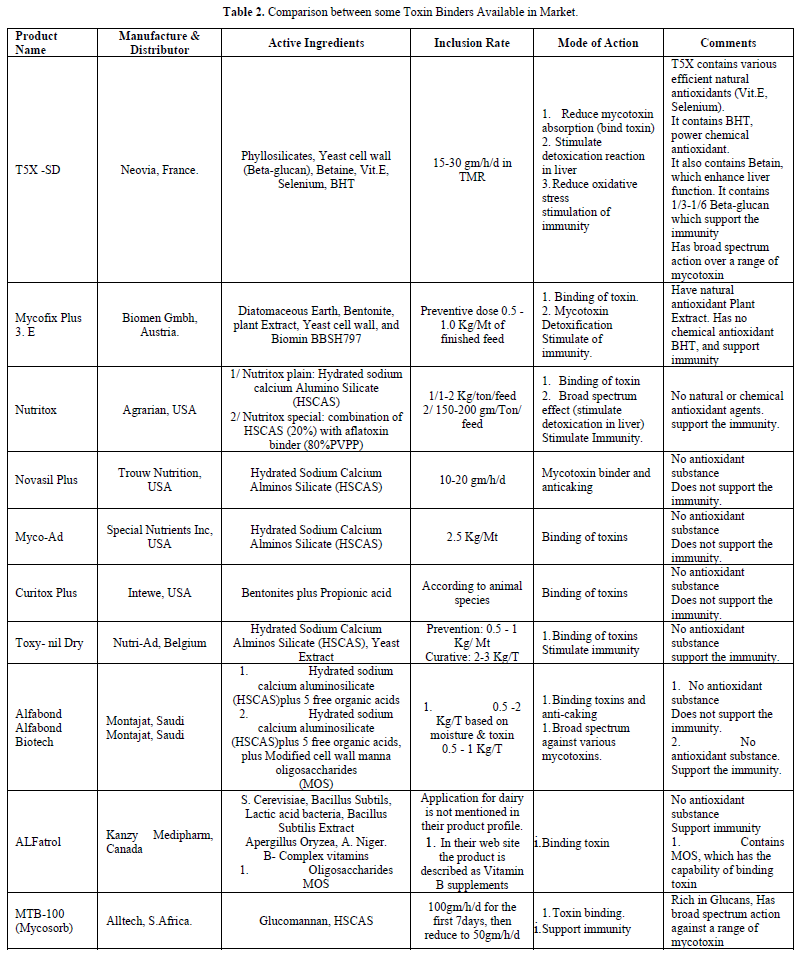 There are a number of the products on the market that claim to reduce the levels of mycotoxins in animal feeds. These are:

Although a number of adsorbents (binders) are available to reduce the negative effects of mycotoxin contamination of animal feed, it is likely the highest success rates will be achieved by good mill hygiene and management combined with an effective toxin binder.

It is most likely also that a combination of mycotoxin binders with natural oxidant such as organic selenium and vitamin E will be an effective approach to compact mycotoxicosis in future.