Copyrights: ©2021 Ehimen FA, Ofili AN, Akpan IS. This is an open-access article distributed under the terms of the Creative Commons Attribution License, which permits unrestricted use, distribution, and reproduction in any medium, provided the original author and source are credited.

Objectives: This study was conducted to assess the frequency and the circumstances for occupational exposure to Blood and Body Fluids (BBFs) among Primary Health Care Workers (HCWs) in Esan West Local Area of Edo State, Nigeria.

Methods: It was a cross-sectional study conducted amongst 213 HCWs working in 23 Primary Health Care Centers in Esan West LGA, Edo State, Nigeria. Interviewer-administered questionnaires were used to collect data on accidents exposure to blood and body fluids, number and circumstances of exposures. The significance level was obtained at a 95% confidence interval (CI) and value ≤ 0.05. Data were entered into a spreadsheet and analyzed using IBM SPSS (statistics product and service solution) version 22.

Results: Two hundred and thirteen health workers were interviewed amongst which 39.7% of the HCWs had exposure to BBFs in the last 12months. Of these aforesaid exposure in the past 12months, 52.9% and approximately 7% of the exposures were as a result of sharp injury and mucocutaneous exposure respectively. Greater than half of the respondents reported having more than one exposure. Furthermore, about half (46.9%) and 15% of the exposures occurred as a result to sudden movement of the patients and recapping of needles.

Annually millions of health care workers are faced with life-threatening infections resulting from percutaneous and mucocutaneous exposure to blood and body fluids. These infections are estimated to result in approximately 16000 Hepatitis C Virus (HCV), 66000 Hepatitis B Virus (HBV), and 2000 Human Immunodeficiency Viral (HIV) infections [1-3]. The Center for Disease Control and Prevention (CDC) has estimated an annual rate of 385,000 needle stick and sharp injuries showing an increasing trend among Health care workers (HCWs) [4]. Needle stick injuries (NSIs) are injuries that result from accidental penetration of the skin by the injection needle.  Worthy of mention is that percutaneous injury is the most prevalent source of occupational exposure to blood and body fluid [5-7]. Certain phenomena tend to increase the HCWs susceptibility to needle stick injury. They include recapping of needles, lack of training, the poor practice of standard precautions, lack of PPEs, type of procedure, poor knowledge of hazards associated with NSI [2,8]. HCWs are particularly prone to infection from blood borne pathogens because of the non-availability of personal protective equipment, even in the presence of the few personal protective equipment, non-adherence to this protective device is the main factor affecting the health and safety of HCWs [5,9].

The rate of exposure to blood and body fluids differ from developing to developed countries and also it varies within the same country [3]: the prevalence in some developed country ranges between 30% and 45%; in Africa, the prevalence could be as high as 65% [3,10-12]. Data from studies conducted among HCWS in teaching Hospital and Primary Health Care centers in Southern and Northern Nigeria revealed that the prevalence of accidental exposure ranges between 24.5% and 85.5% [5-6,13-15] Similarly, studies conducted in Nigeria and other parts of Africa have shown that majority of the inadvertent exposures occurred as a result of recapping of needles, during use of injections, discarding of needles among others [2,5,13].

The study was conducted in PHC facilities in Ekpoma, the administrative headquarter of Esan West Local Government Area (LGA) of Edo state, in south geopolitical zone of Nigeria. There are twenty-three primary Health Centers within the LGA, all owned and supported by the Local Government [16] The head of the PHC centers ensures the smooth running of the centers, and report to the Primary Healthcare Coordinator.

The study population were health care workers in Ekpoma PHC centers. These PHCs were distributed among the wards in the LGA. The study exercise was conducted for six weeks; between May and June 2016. All consenting health care workers that have full-time employment with the LGA (that have worked for the LGA Primary Health Care centers for at least a year) and are involved in direct patient care were included in the study while HCWs that are on leave (maternity, annual, sick) were excluded.

A total of 213 Health Care Workers across the Primary Health Centers in Esan West Local Government Area were interviewed. 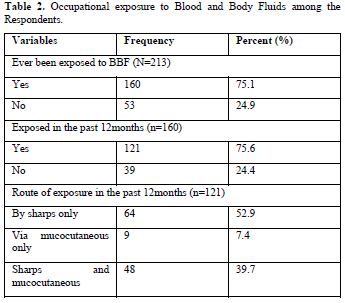 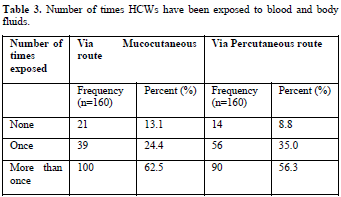 The most frequently reported site of exposure was the non-dominant index finger, which accounted for 56.9% of the exposure. Other common sites of exposure include hand/palm (15.6%); leg (11.9%); non-dominant thumb (8.1%) (Table 4)

There were statistically significant associations between exposure to BBFs with respondents’ age group (<0.001), and with gender (0.012). Majority of the respondents between the age category of 31-40 years and 41-50 years recorded higher exposure to BBFs being 62(91.2%) and 38(95%) respectively (Table 5). Also, 4(80%) and 6(54.5%) of the respondents with the age group of fewer than 20 years and greater than 50years reported exposure to BBFs while 50(56.2%) of HCWs between the age group of 20-30years reported exposure to BBFs. Concerning gender, a higher proportion of the female 147(77.8%) seems to be more exposed than as seen among their male counterpart [13] (54.2%). There were no statistically significant associations between exposures to BBFs with job category and experience (Figure 1). 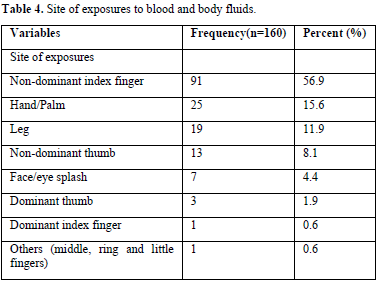 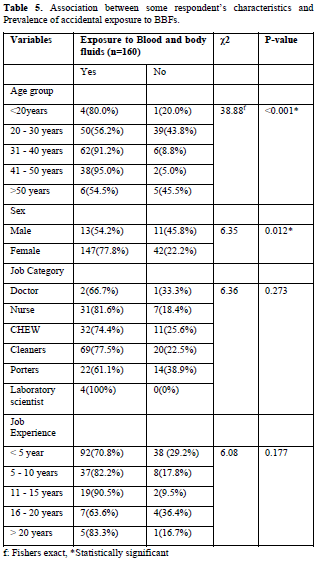 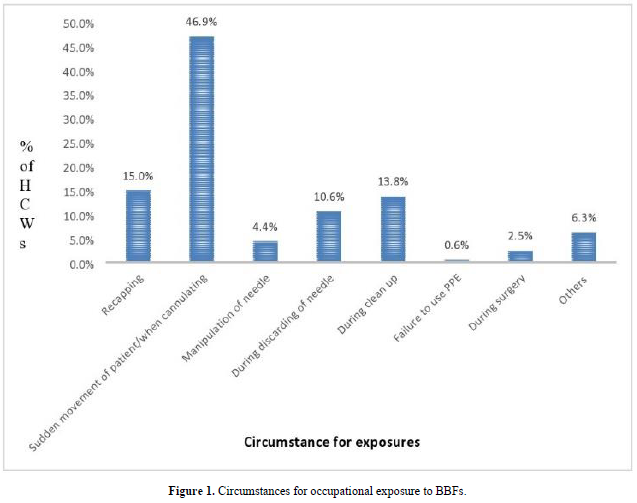 The highest proportion of BBFs exposure occurred due to sudden movement of patients/cannulation (46.9%), followed by recapping of needles (15.0%) while the least was failure to use PPEs.

The high level of occupational exposure to blood and body fluids underscores the need for improvement in occupational health safety to prevent transmission of blood borne pathogens among health care workers. Despite the detailed guideline regarding standard precautions by the CDC, it is sad to note that the level of accidental exposure to BBFs is still high in Nigeria. The lifetime exposure to BBFs was high, greater than seventy percent (75.1%) of the HCWs had exposures. This high exposure to BBFs demonstrated our study may be due to poor compliance with standard precautions, and such HCWs workers are likely to be more prone to blood borne infections. However, the exposure is high compared to the findings reported in Nigeria, where less than fifty percent of the HCWs had a lifetime exposure to blood and body fluids [5]. Similarly, a study conducted among health care workers in Harari and Dire Dawa region of Ethiopia gave a lifetime prevalence far less than what was reported in this study [18].

This study also noted that the prevalence of occupational exposure to blood and body fluids in the past one year was relatively high. The observation regarding NSI in this study is similar to what was reported among health care workers in other studies [19,20]. However, the figure reported in this study is lower compared to what was reported in other studies carried out in Northern Nigeria and Uganda [21,22]. It was far higher than the value stated in a multi-center study and Ilorin, north-central, Nigeria as well as the review in Africa, where the one-year prevalence is less than thirty-two percent [5,6,23]. Similarly, studies conducted in the United States of America and Saudi Arabia among HCWs also gave a needle stick injuries prevalence that was lower than what was observed in this study [24,25].

Furthermore, the mucocutaneous exposure reported in this study was lower compared to 85.5% reported in Southwest Nigeria [21]. Additionally, most of the HCWs exposed were nurses. These findings are consistent with reports in another study [24]. The differences noted regarding the variation of accidental exposure to blood and body fluids may not be unconnected with the discrepancies in health care workers studied viz health care environment, poor knowledge and practice of standard precautions.

A significant proportion of the occupational exposure to blood and body fluids occurred as a result of sudden movement of patients/cannulation, and these findings are consistent with observation noted among HCWs studied in Ethiopia, where the majority of the occupational exposure resulted from sudden movement of patients [18,26]. Also, apart from a sudden change of patients, recapping of needles (15%) was one of the significant circumstances why health care workers had accidental exposure to blood and body fluids. Despite advocacy and health education regarding dangers of recapping needles, it sad to note that most the HCWs reported recapping needle, this practice is a reflection of the poor practice of standard precautions/injection safety practices.

All appreciations goes to health care workers who paid the supreme sacrifice during the Covid-19 pandemic. Special appreciation to staff and management of Lily Hospitals Ltd and the Primary health care centers in Ekpoma, Edo State for their unalloyed support and encouragement.

The authors declare that they have no competing interests.

The research was self-sponsored.